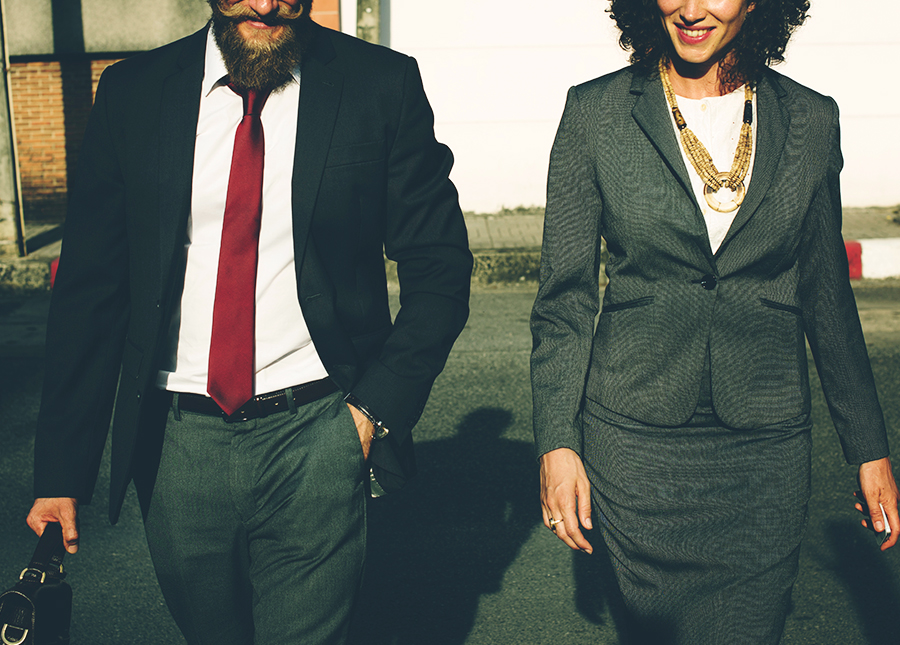 Stop me if you’ve heard this one before.

A woman walks into a bar. The bartender says, “Sorry we don’t serve women here.” The woman says, “That’s no good. You ought to update your policy, since we make up over 55% of the workforce in the US.”

The bartender says, “Fine, but only women that can engage with men in the workplace in non-threatening and traditionally masculine means.”

Enter the cliché of corporate success being directly correlated to a shared interest in football.

Before the collective internet cries out, I’m not saying that football fandom is inherently gendered. I was raised in a hardcore football-loving family – my mom and sister are the biggest Raider fans you’ll ever meet. It’s how they bond with each other, their partners, parents, friends, clients… Football is a cornerstone and a great tool for building meaningful relationships both in the real world and in the workplace.

I see the value in it. It’s a cultural past-time – our Coliseum Battles. I understand that there’s serious strategy behind how the game is played, and some would say fairly high stakes. I understand the interpersonal relationships formed around a shared love of the same team, and the camaraderie of sharing a loss or win on a national scale – let alone in a shared office space. And that camaraderie makes a difference in the boardroom. So here’s my problem:

I had every opportunity to get into the sport and never caught onto it (sorry, Mom). And it’s affecting my career.

I work for a company that I genuinely love, but constantly see the higher-ups bond with us lowly peons over sports games and fantasy league drafts. The VPs invite the guys to hockey or basketball, and the C-level execs open their homes to host Fantasy Football draft nights. I love that they have this shared sense of camaraderie. How cool is it that these established industry leaders are so welcoming to those of us just entering the workplace?

Well, most of us. And to be frank, it’s the half of us with male genitalia. And sure – I’m not a football fan, so who cares if I’m not asked to join in on things I will genuinely not get excited about?

Still, what about my female peers who would be thrilled to join the VPs for a game, but are still getting passed over?

The overly simplistic answer is that leadership needs to stop making assumptions that people wouldn’t be interested in the opportunity simply based on gender perceptions, or perhaps that if women do love football, they’ll have to proudly display their passion for it and make it their #1 visible personality trait.

I don’t like either of those answers, though. Generalizations like “guys like football, hoorah” save time and potential embarrassment for employees and execs, sure, fine. And the guy at the next desk over doesn’t need to prominently display a jersey, so why should the girl who could probably run football-fan-fact circles around him? Perhaps the answer is that if you, a football-loving lady, want to participate, you’ll have to actively raise your hand or voice and let the team know you’re interested. Force your way in and bond over your shared love of [insert team name here].

Unfortunately, the onus will be on you until women like me stop parading around blissfully ignorant about sport-game. I’m not the be-all-end-all representative of my collective gender, but I do give my higher-ups reason to expect that women are uninterested in participating in sport-related bonding. Sorry!

And for those of us who like being blissfully ignorant about sport-game?

How do those of us who couldn’t care less about football season starting set ourselves up to make a good impression? Is there an equally convenient bonding experience for those of us who really don’t want to feign interest in men getting concussions in order to earn points on a field? Because let’s face it: it’s not the WNBA or the Legends Football League that my company is supporting on their outings. Also, straight up, why is the closest answer to a women’s football league based on playing tackle sports in lingerie? America, get your shit together.

My problem isn’t that the male football players aren’t wearing scant outfits. It’s that my company shows clear favor towards those who blend in with and bond with the “Good Ol’ Boys” club in-house.

It’s no secret that deals are made after hours at the Staples Center box or that promotions will more likely be offered to those who make great impressions at the COO’s house while picking the right fantasy league team. How do you prove you’re worthy of getting ahead when you’re just outside the Boy’s Club, aside from good old fashioned hard work and perseverance — which then can be glossed over when the credit for your efforts is swiftly taken by the sports-fan boss?

It’s possible, but it’s going to be harder. Luckily we’re starting to see a culture shift. While the sports powers-that-be are still securely in place, we’re also seeing leadership evolve outside of the typical club. The rise of women in leadership roles, as well as the rise in popularity of nerd culture over jock/bro culture, is seeing to that, and I’m excited to hear conversations change in my office.

We’re going from just talking about golf, football teams, and basketball to also talking about things like, well, Project Runway and video games.

Turns out there are people throughout any organization that care about more than work, kids, and football (not that any of those things are bad). You just have to take the time to find them, and pick up on cues ranging from an off-hand topical reference to a desk stacked with Lego Star Wars models. The only way to break away from the silence that follows “how about them sports” conversations is to feel like you have the ability to let your personal obsessive freak-flag fly, whether it’s a passion for Legend of Zelda, National Parks, reality TV, Competitive Baking, Harry Potter, book clubs, or video games. There’s room for you.

So get comfortable and dig in. Start initiating the change in your office culture, and find your counterparts.

You don’t have to smile and nod along about how ground-breaking some catch was (I think that’s how that works). Start your in-house book club. Set up a company-wide Harry Potter House Cup Challenge! Geek out at the coffee machine with your fellow Last of Us hyper-fan!

Be inclusive and unapologetically genuine. Earn yourself the nickname “Star Wars Girl” from the company partners. They may not think of you as the die-hard fan of all things astroturf and 50-yard lines (“sports”), but they’ll know who you are and recognize your name when you do good work.

We can stop using football as a social crutch. “How about them (sports team)” is right on up there with talking about the weather, and we can do better. People have more to their personalities than just a love of sports, even if it’s less of the social norm. I guarantee you have more in common with your execs and VPs than you currently know – go out there and find out what it is!