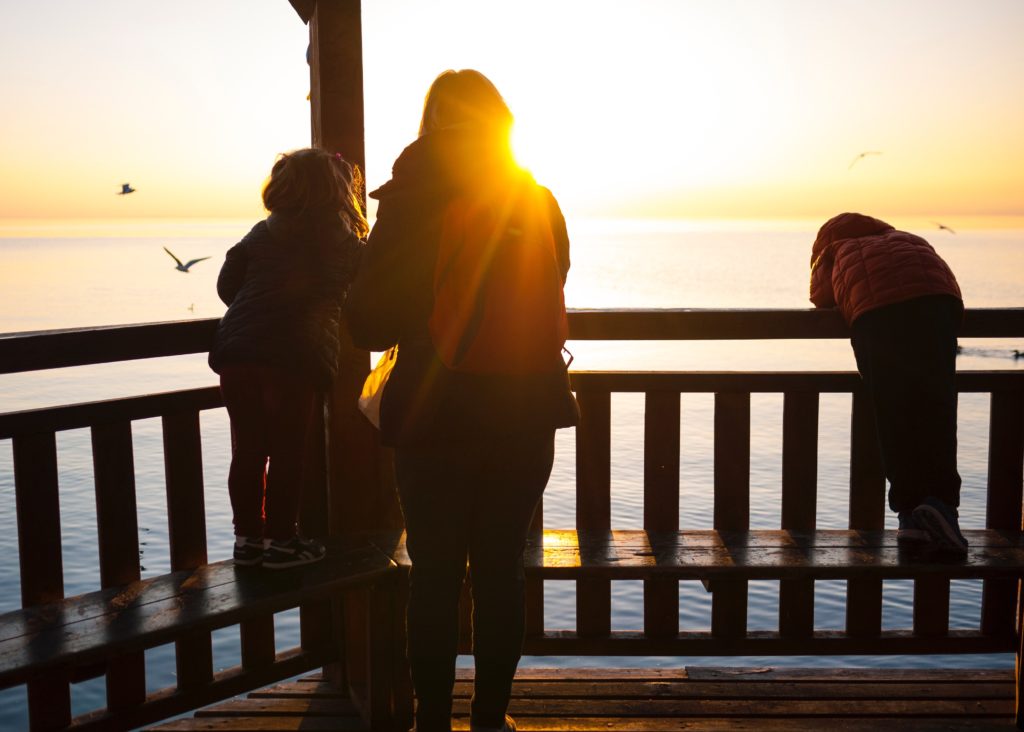 I’ve written about our decision to opt out of opting out before. In short, major spending restrictions don’t seem to target our money needs right now. Five years ago, when I literally bought an espadrille in every color so I could make a rainbow on my personal Instagram account? Money gods, yes. Now? Not so much.

Plus, I have some philosophical hesitations about pretending to be poor. It’s the same reason that I’m not sure I will ever wear the minimalist label. At least not the one that Thoreau or The Minimalists wear.

But then, as I am wont to do, friends, I contradicted myself. I realized, whoa, we actually did a ton of no-spend days. And maybe, just maybe, I benefited from them. After flirting with the idea somewhat and then realizing that I didn’t have anything better to write about for the blog this week, I decided to do a no-spend weekend.

In the doldrums of winter.

Over the long weekend.

And my toddler (HP).

Here’s how we survived a no-spend weekend as a family, and what we learned.

What We Did Instead

I have to be honest, when I first had this little brainstorm I kind of thought I was about to make our weekend, well…suck. If the whole point of money is having options, wasn’t I suddenly taking a ton of options off the table? We weren’t about to fly to the south of France or even drive to Wisconsin Dells. This much I knew. But money equals options.

Surprisingly, our weekend didn’t feel that way at all. Instead, it felt really full. Here’s what we did with our time.

We went outside in the cold.

Honestly, I could probably add a post to the frugally awkward series dedicated solely to the strange comments and looks we get when we head outdoors in all four seasons. But there is nothing my baby loves more in life than being outside.

Well, being outside in his just his diaper but that’s another season.

I have to admit that I used to hate the cold. I’m still not a huge fan of driving in snow or walking through slush, but once I learned how to dress properly, I found that I really don’t mind being outside. And my baby loves it, so out we went.

We walked the neighborhood. We visited parks. We cruised along the bike paths. We even brought a super lightweight shovel (OK, so now you know why we get weird looks. But a whole lot of people got their sidewalks shoveled. You’re welcome!). The catch, of course, is that we can only be outside for short bursts of time because a certain child of mine will not wear a scarf or a ski mask. Even so, being outside for 20-30 minutes bursts is a refreshing way to break up the day.

I can’t even pretend that there isn’t crayon my laptop keyboard. There is.

But HP did a ton of coloring on his own, and it was the first time that he seemed genuinely interested in it. I think age is part of it, and also it’s because he actually had the time to keep going back to his…um…artwork.

We also brought in a bit of snow on a baking dish so he could poke at it until it melted. And we played pretend with pots and pans, jumped on the couch, and practicing our hiding skills.

We used what we already had

Kids are expensive. I will say it at least a thousand more times this week. Daycare and college tuition, food and diapers. It adds up.

But kids are also expensive because parents have been trained to make them expensive. Even as someone who is actively working to combat consumerism, I am still tempted to buy him things. ALL.THE.TIME.

This weekend, though, that wasn’t an option. Instead, we rotated through some toys and books that we hadn’t played with or read in a while. We took some favorites from the family room and put them in the basement. Suddenly, the same toy in a different setting seemed to take on a new life.

In addition to having more time to take care of tasks around the house (it turns out, not shopping frees up more time than I realized!), I was able to take inventory of some things and realized we had another small pile of toddler clothes that we could Freecycle. Plus, I started eyeballing a few of my own items that are destined for Poshmark and finished up boxing up two (!!) diaper boxes full of clothes for the clothing pantry.

We found other options for free.

I have to admit that the winter season and the holiday somewhat limited our options. But as usual, we struck gold at the library.

We didn’t take advantage of any of their free programming — HP is still probably a little too little and the offerings were limited with the holiday — but we did stock up on books and puzzles. This is actually our second rotation through of wood puzzles. HP is a puzzle whiz, and I was really tempted to fill my online shopping cart with more Melissa & Doug (OK, fine, I actually did fill it up), but then I remembered we could borrow them from the library instead.

We also spend some time at another library that has a train table and tons of other toys. Not only can you really get some actual miles out of your library card by applying for reciprocal library benefits, anyone can go into a library to play and read with or without a card.

If it wasn’t the holiday weekend, we also probably would have stopped by the museum that HP has a membership to. But I wasn’t interested in battling the crowds, never mind circling the parking lot like a shark hunting for a spot. So to the libraries and the parks we went!

There are a lot of people who are excellent with no-spend challenges. Zero Day Finance (it’s in the name!), The Smart Fi, and the list goes on and on. But I was — and still kind of am — skeptical of doing one long term. Still, I think this short burst taught me some powerful lessons.

I actually still default to shopping

But I shop far less than I ever have. In fact, it’s been years since I’ve bought something just to buy something. If something wears out or no longer fits, maybe I’ll replace it. Honestly, though, I have so much, that there hasn’t been much of a need.

Even without being tempted to go to the store, I am still online shopping almost daily. Since this challenge happened over a holiday weekend, my inbox had dozens of emails at the start of each day and dozens more by the day’s end. I got emails from Carter’s, OshKosh, and Skip Hop three times a day, three days in a row. You know what? They’re all the same company! It all redirects back to the same website.  Of course, I can and do unsubscribe quite a bit. But I’m also still weirdly attached to the notion of saving just the right coupon for just the right purchase. I open next to none of these emails, but I do open some. And if I’m not throwing something in my Target shopping cart at least once a day it’s probably because there’s no electricity and the batteries on all of my devices are dead.

So this challenge really made me confront that. Even when I knew I wouldn’t be spending any money, I still wanted to look. This virtual window shopping matters, and it’s something I’m working on curbing.

Not spending frees up time for other hobbies

Actual hobbies. Shopping isn’t actually a hobby, though in the past, I think I would have almost always listed it at the top, right next to reading. It was very much a social event with both family and friends. But once the mall wasn’t an option, I got to thinking about all sorts of other things I could do.

In my decluttering, I found a book I’ve been meaning to re-read, and I actually read a good chunk of it. I spent time writing for my blog (hobby!) and for other blogs (money!). I baked, I played piano, and more importantly, I dedicated the bulk of my time to my family.I went back to work after the long weekend feeling sad but also feeling satisfied that I took full advantage of our time together.

I spent — but I spent smarter

I actually went into this challenge knowing that we were going to spend money. I thought about moving our grocery shopping to Tuesday, but that actually seemed to go against the purpose of these kind of spending challenges. But while I grocery shopped, I caught myself being very mindful of the ingredients that we already have and the make-at-home options that exist. For instance, I knew our cabinet runneth over with baking mixes, so I made a cake instead of buying desserts for Mr. P’s lunches this week. I also baked banana bread, so we only bought one box of snack bars instead of two.

I didn’t save a ton of money by doing this, but shaving $5 from a $60 budget is pretty impressive. Plus, HP absolutely loves to pretend bake next to me in the kitchen. Entertainment and saturated fat all for free. What a bargain!

Final Thoughts on Surviving a No-Spend Weekend as a Family

There you have it. I survived a no-spend weekend with kids. Well, a kid. Plus my husband. The three of us lived to tell the tale, and it was actually wonderful. Looking back, it doesn’t seem so different from how we spend the bulk of our time. However, I did notice is that it just felt like there was slightly more of it.

Let me be clear. No-spend days are not panaceas. I am not retiring tomorrow. Nor do I think that they are the antidote to the lack of time or pressure that most of us feel.

But they are powerful, and they are important. In fact, they’re downright fun. We won’t do one every weekend, but I think we’ll come back to this idea again next season. When the weather cooperates more, it might be fun to see how many more options for free fun open up to us.

So Tell Me…Do you do no-spend challenges? Do you think they’re harder to do with kids? Do you have a no-spend link? Feel free to drop it below!