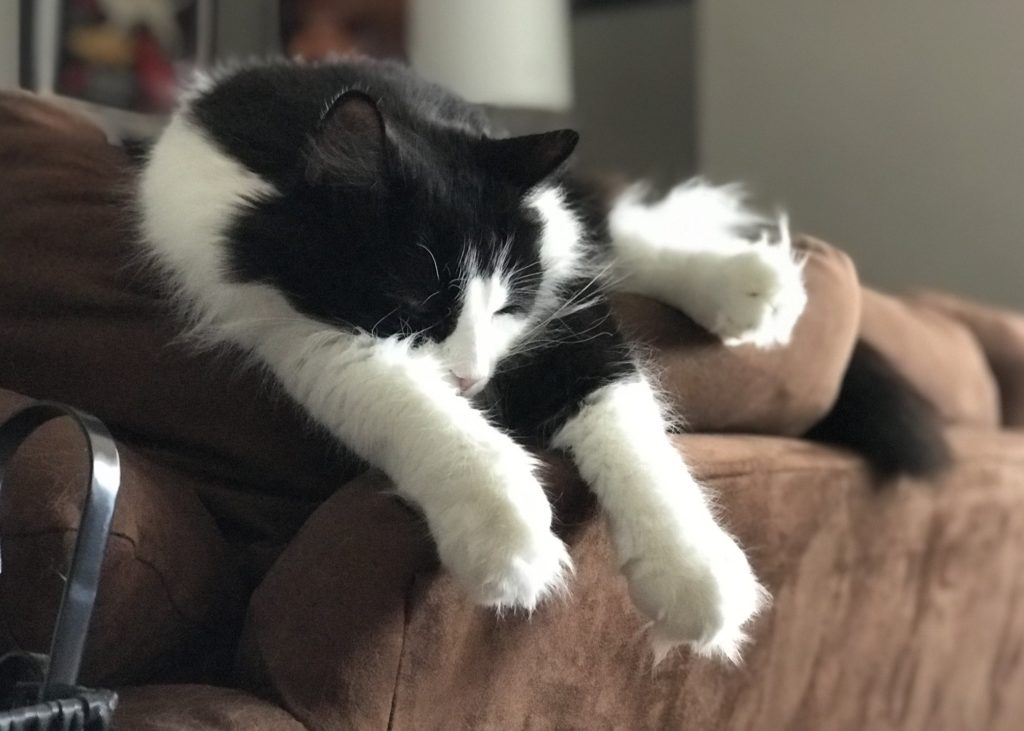 It was a bone-chilling -30. My apartment — a second-story add-on in an old Victorian in central Toronto — was eerily quiet. Every day I woke up early, fed the cat, and drove to work. After work, three nights a week I’d drive to the suburbs, teach dance for a couple of hours, stay longer for extra (unpaid) choreography cleaning, drive home drowsily, and do it again.

I’d just been served an eviction notice. My roommate was unreachable in Europe and had no idea what would befall her at home. I had 30 days to gather my things and move back to my parents’ place in the suburbs until I could find a new opportunity to start over. I should have been devastated, especially because I stress easily. But after half a year with my roommate, this felt like the only satisfying end to a chaotic lease. What should have been one of the most chaotic times of my life turned out to be one of the most peaceful and serene.

I met my roommate through Kijiji (a Canadian marketplace similar to Craigslist). I’d been working as a reporter for a year, and not living in the city I was reporting on was starting to hurt me (not to mention the two-hour commutes). But all my friends who’d expressed interest in rooming together flaked. My colleagues suggested I look online for a roommate, something I’d never done before. They all assured me it would be fine. Now, not all random roommate situations result in chaos. Most people aren’t crazy scammers. But looking back, I was definitely too naive to go that route at the time.

My new roommate, who had been in the house for two years and was about to lose her own roommate, came across as sweet, but also seemed annoying, dramatic, and possibly a bit of a liar. But I was looking for a roommate, not a friend. After hanging out a few times, I decided to sign the lease. Even if this girl wanted to screw me, she seemed too dumb to do much damage.

With all due respect to my 23-year-old self: lol.

She turned out to not just be naively dumb, but erratic and impulsive, almost always short of money for basic things like dish soap and lightbulbs. She was loud and over-dramatic (she once guilt-tripped me for not asking if she was going to be okay because she had a cold, and asked me to spend the week at my parents’ until she “recovered” and then Vaguebooked about my lack of concern). The rent was already steep for my budget — $980 CAD per month from each of us, plus Hydro, plus $80 CAD per month for parking — and I ended up spending a lot to clean up her messes, from little party accidents to big moves that got me into trouble.

The biggest mess occurred late that winter. She’d left on a 10-week trip to Europe that she’d been planning for only a couple of months. After her destructive going-away party, I was relieved to have the place to myself. That was short-lived; on the second of the month, our landlord called to say he had not received my roommate’s rent and couldn’t contact her. Someone — he didn’t care who — had to come up with the money. I tried to contact my roommate. When she finally responded, she rambled excuses about running out of checks, and wouldn’t even consider methods like a wire or an e-transfer. She told me to never speak to her so rudely again and blocked me. I was left high and dry, with an eviction notice in my mailbox.

It’s fairly easy to fight an eviction notice in Ontario, so I managed to negotiate with my landlord to take my rent for this month, as well as my deposit to cover the other half, and kill the lease in 30 days. He would deal with my roommate when she returned. He was mainly on board because of how competitive the Toronto rental market is; an empty unit doesn’t stay empty long here.

I’d pissed away seven months of what was supposed to be my prime years — educated, working, living in an exciting city — all because I lived with someone I couldn’t trust. If you’re ever looking to move in with a random roommate, you absolutely need to be judgmental. Get separate accounts on everything you can, and demand to see paper copies of everything. If you can afford to, you might even want to get a lawyer. Moving home by itself cost me more than $1,000 CAD ($755 USD) for the truck and services. But here are some of the other big expenses along the way:

Letting her get a cat without talking about it first.

My roommate had never mentioned liking cats or owning cats, so I was surprised when she messaged me after a month of living together saying she was at the Humane Society looking at cats. I was hesitant — neither of us were home often, and she was already messy, so I had a feeling adding an animal into the mix wouldn’t go great. But I didn’t feel right lecturing a grown woman about what to do with our shared space.

So I said “Sounds nice!” and came home to a sweet black-and-white cat crawling all over her sectional. Ben was her favorite new thing — for a week. After she got bored of him, she would come home only to sleep, closing her door so he couldn’t sleep with her. Ben acted out at first, drinking from the toilet and knocking glasses off the table. But once I started bonding with him, he calmed down. She decided within a few months that she didn’t have to bother taking care of him at all. Sometimes I would leave for a weekend on Friday morning and see that he was out of food, and by the time I came back Monday, there would still not be food in his bowl. I lectured her about this, but it never yielded results, so I started buying his food and litter, which amounted to over $200 by the time I left. I also bought him a litter box ($27), since he’d been pooping in a cardboard box without a lid.

*Besides litter and food, Ben has ultimately cost me in the four figures. When I moved out, my roommate wasn’t due home for another six weeks, so I took the cat. I would have given him back if she asked, but she did not. Ben has been mine (and my husband’s) ever since, and besides standard costs, he had a medical emergency in 2016 that resulted in nearly $4,000 CAD ($3,022 USD) in vet bills and meds. He was mine, so that’s not really on her, but it is a huge long-term cost.

Not insisting on paper copies of utility bills.

We paid for Hydro (electricity), but not water or gas. However, our heat was electric, and therefore reflected in our Hydro bill. The bill was already in her name, and she had auto-withdrawals set up. When she emailed me after my first month and the bill was $50 and change, that seemed pretty normal to me. What didn’t seem normal was that instead of sending me a copy of the bill, she sent me a screenshot of the withdrawal from her online banking. I asked her why she couldn’t just send me a PDF of the bill. She told me she didn’t get the emails — maybe they went to her spam filter. It was clear I wasn’t going to get that bill, and I couldn’t force it. But I tried to curb my suspicion, both because the bill was a normal amount and, frankly, she didn’t seem sharp enough to be good at Photoshop.

The bills hovered around that amount until December, when it suddenly shot up, which she attributed to our heat. Toronto suffered an historic ice storm that year, but she still insisted that we turn the heat below the legally required minimum. I opposed this, so the next two months turned into a passive-aggressive war of me turning up the thermostat at every given chance and her turning it down. Our apartment was barely inhabitable; I was feeling sick from the cold and I worried mold would set in soon, so I bought a space heater for my room. Our bills stayed sky-high, which she blamed on my heater.

I should have told her to show me the bill or I wouldn’t pay. But she’d been so erratic already I was afraid of what she’d do. Because the bill was in her name, I had no way to contact Hydro myself and get it changed to mine. By the last bill she sent me, the total had tripled.

Then, when I was packing up my things, I went to the mailbox and saw an envelope from Toronto Hydro addressed to her with a scary warning on it. The account had been in delinquency for months, and the attached history shows there had been minimal payments made – enough to keep our lights on – but the total balance had not been paid since November. Whatever screenshots she was sending me were fake, and I’d been paying her money that hadn’t been going anywhere. I tried to Hydro, but they wouldn’t speak to me since I wasn’t on the account. I cut my losses. I already knew I was moving in several days, so I figured by the time she came back, the lights would be off, and she could deal with that.

Not meeting our neighbors (who we shared bills with).

My roommate said a young couple lived next door to us, and we paid them $20 per month for a share in their WiFi. I never saw the neighbors, but my roommate said she knew them well, so on the first of every month, when I’d transfer her my share of the Hydro bill, I’d also hand her $20 to give to our neighbors.

A few days after I’d decided to leave, I got booted off the WiFi, and my password no longer worked. When I knocked on the neighbors’ doors, they were not happy. Turns out, my roommate had stopped giving them both of our halves of the internet bill in December. When I’d been on my own and slipped the $20 in an envelope under their door, that just insulted them more. I managed to convince them that I had no idea she was doing this, but despite their sympathy, they weren’t keen to let me back on the WiFi until they got what they were owed. I still had to live there for a month, and with no nearby cafes and no option to use my data (data in Canada is notoriously expensive), I gave them $200 cash to make up for my roommate’s thievery — in addition to the $20 per month that had gone straight to my roommate’s wallet.

Maybe if I’d just knocked on their door to introduce myself or invite them for coffee, we would have found out that she was screwing us sooner. Alas, we live in an age where being neighborly is seen as being weird and creepy. And I, non-confrontational and naive, got the short end of that stick.

My roommate now lives in Europe with someone she met while there. She only contacted me once after I moved out to apologize (sort of) for the Hydro bills. She has never asked about the cat.