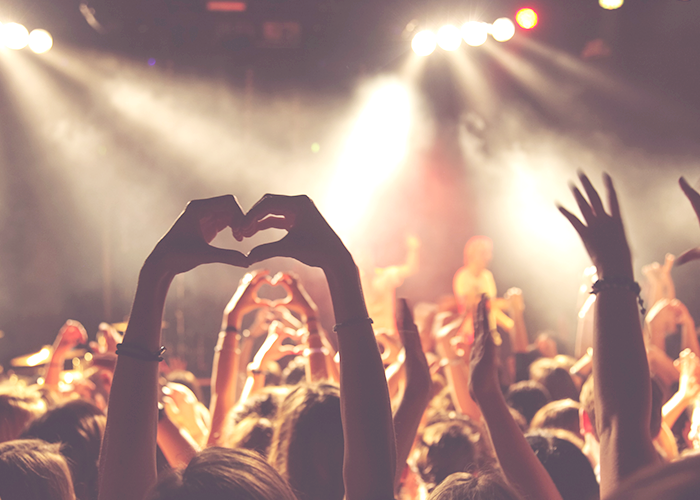 Between tickets, hotels, gas, food, and drinks, I’ve spent at least $5,000 attending concerts (to see about 70 or so artists perform) since June 2009. On average, that’s $715 per year for seven years. And, honestly: I don’t regret spending a single penny. In those three sentences, I may sound irrational, I may sound foolish, and I may sound wasteful. But I can’t begin to explain how happy each concert made me feel.

I’m a country music girl, and I’m especially a fan of bands from the 1960’s, or the Outlaw Era of country music. My favorite artist, Jamey Johnson, is a so-called “throwback artist” to that era, and he is an artist whom I’ve seen in concert 17 times since June 2009. (My parents think it’s a bit ridiculous.) Besides the happiness and inspiration I get from all of the concerts I’ve attended, the travel to concert venues allowed me to spend time with friends whom I don’t get to see very often because they live in five hours away, in north Georgia. If concerts are a good meeting place for us, I’m all for it! Spending a lot of money on tickets, hotels, and gas may be an expensive way of spending time with friends, but these concerts are something we all enjoy, and they bring us together.

It’s hard to say exactly how much I’ve spent on every concert experience, because a lot of things affect the cost: the type of concert (solo artist versus music festival: different ticket prices), the town the concert is in (which determines how far I have to drive: gas money), how many people are splitting the hotel bill with me (more merrier…and cheaper), etc. Some concerts I attended featured fairly unknown artists (like the $20 ticket I bought to see Chris Stapleton before he became well-known), while some concerts charged $200 for VIP tickets. But, to give you a general idea of the way a musical adventure affects your wallet, here’s a cost breakdown of a typical concert that’s, say, three hours from home.

That’s a lot of money; money I could have used somewhere else. When I’m in a mood where I’m all about cutting costs and putting more money into my savings account, which is quite often, the $5,000 I spent on concerts would look great added to my current savings balance. In fact, if that $5,000 was in my savings account now, my six-month emergency savings goal would be met instantly (instead of saving for eight more months).

When I started keeping a detailed record of my expenses in October 2015, I initially didn’t worry about budgeting for concerts because I had money in a checking account, an IRA, and a savings account. I felt like I could still freely spend when I wanted. Now that I’ve kept a record for nine months, I see how much I’ve had to work for and recover what I’ve spent on concerts. Going forward, I have a lot of restructuring to do with my budget and how many concerts I can afford. Thinking about the lump sum I spent on tickets has made me worry on my financially-stressed days. But, as I’m meeting my monthly savings goals, every minute of happiness and pure joy that concert-going brought me feels like it was worth the money.

You’re probably wondering how I could afford such a luxury to spend this much money on concerts. The truth is, financially speaking, I’m thankful and blessed to be in a very lucky situation that a lot of people don’t have. I lived with my parents during college (besides the one year I went to a different college and lived in an apartment) because campus was only 30 minutes from home. That meant I didn’t have housing expenses. I graduated college in May 2014 and chose to continue living at home so I could save money and move to a bigger city. During college and since I graduated, I’ve worked in an insurance office, babysat at least one weekend every month, baked and sold cakes and cookies for birthday parties, and helped my aunt in her catering business. On top of being able to save money, I had scholarships to pay for most of my college tuition. What the scholarships didn’t cover (mainly books and school supplies), my dad generously offered to cover.

Since I didn’t have many bills during college and because I have no student loans to pay back, I’ve been able to either save or spend the money I’ve earned however I want. I know, I know. I probably sound like a spoiled, rich kid, but the truth is this: I drive an 11-year-old car, I eat cereal for supper because it’s cheap, and other than a one or two-day concert trip, I haven’t been on vacation in 10 years. On the rare occasion that I buy clothes, they come from the sales rack. Because I’ve been in such an ideal financial situation with hardly any bills, and I’ve held myself to living frugally, I’ve had the budget to spend $200 on a ticket to a concert I care about.

My plans are to move to Nashville, TN, within the next year, so I’m saving every penny I can toward the move. Even though I don’t have a job or an apartment of my own (with monthly bills for which I’m solely responsible), I’ve already plotted out and edited (at least 10 times!) how my monthly budget for living independently in Nashville will look. I’m making very conservative estimations of how much I will earn so that I don’t bank on having a ton of money; I also estimate my other expenses (utilities, gas, food) at higher sums than I actually expect them to be once I’m on the ground: I based my estimations off the expenses I had while living on my own (in that apartment for one year of college) and doubled the sums, just to be on the safe side.

When I look at my estimated income and expenses, I don’t have much money left over to spend on concerts. In fact, after living expenses and contributing to my IRA and savings accounts, I estimate that I’ll have about $25 per month to spend on concerts, which is less than half of what I have been spending. While I won’t be able to afford the concert lifestyle I’ve grown used to, I’ll be living in Nashville; I’ll have a lot more opportunities to attend concerts in my neighborhood, which means I’ll save money on travel, gas, and hotel costs.

In the past, when I sawfriends spend huge sums of money on hobbies, or read articles about people who spend a lot on travel abroad, I’ve often thought that spending so much money was wasteful. Then, of course, I realized that I do the same thing! This realization made me sit back and think: If you pay your bills on time and you’re saving money on a regular basis, it’s okay to enjoy some of your money, too. Yes, I’ve spent thousands of dollars on concerts and have nothing to show for it besides ticket stubs, wrinkled wrist bands, a few pictures, and a heck of a lot of good memories. Yes, I could have been more practical and saved the money to help meet my six-month savings goal. But every penny I spent brought me so much more happiness and inspiration than having the money sitting in a bank account ever could. As crazy as it sounds to spend $5,000 on concerts over a seven year period, I’m so thankful, blessed, and happy that I spent that money.