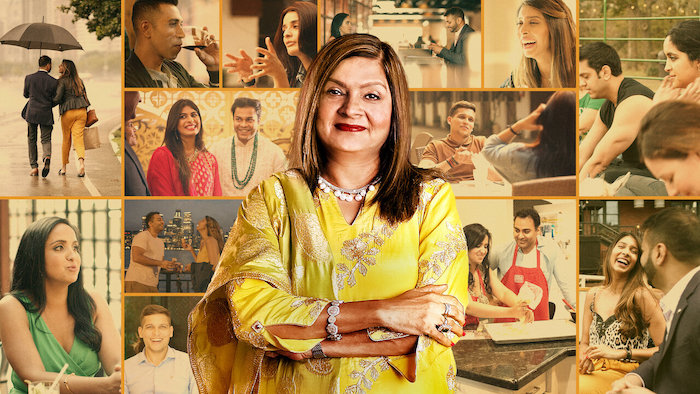 My parents had an arranged marriage in India, and it was assumed that I would have an arranged marriage one day, too. Like most children, I once modeled my understanding of family units and my future marriage on that of my parents. Indian culture tends to view marriage as the union of two families more than the union of two individuals. In that sense, it always made sense to me that my family would be somewhat involved in my selection of a life partner.

Netflix’s new docusoap, Indian Matchmaking, provides a window into what these types of arranged marriages look like today, especially with matchmaking clients who are first or second-generation American millennials with Indian heritage – like I am. In Indian Matchmaking, we follow individuals who employ the services of Mumbai-based matchmaker Sima Taparia, who takes meetings in her client’s homes and speaks with her clients’ parents, grandparents, and siblings. In many instances, the parents are asked what they’re looking for before the client themselves.

I found it refreshing to see this not completely sanitized when presented to a Western audience.

Then, Sima presents her clients with one-page profiles (“biodatas”) of potential matches from her Rolodex of candidates based on preferences for career, height, religion, hobbies, and general demeanor/personality (which often gets lumped into the label “good-natured”). Often requested traits among women: fair complexion, caste status, and, often, homemaking skills.

The show has faced criticism for its capturing of casual colorism, casteism, and sexism, which the show doesn’t really address as problematic. But as a viewer — and a first-generation Indian-American — I found it refreshing to see this depicted for what it is and not completely sanitized when presented to a Western audience.

When I was in fourth grade, one of my Indian peers asked to set up a playdate with me (excluding our two other friends) since her parents preferred that she socialize with only me because of my caste. We were both first-generation Americans, steeped in American culture, yet her parents picked up on the last names (generally a caste indicator) of our friend group and shared this distinction with their child. I didn’t understand all of the historical weight and cultural implications that fed into this request at the age of nine. But reflecting back, I see that blatant casteism still exists in the Indian diaspora, and acknowledging this as a socially upheld institution is important if we ever hope to address it.

We see sexism play out in Akshay’s story. In his traditional search for a match, he’s looking for a wife who will take on the types of duties his mother has so far in his life, like preparing and packing his lunch for when he goes to the office every morning. When he meets a potential match, Radhika, Akshay’s thoughts are that the “family seems nice. The girl seems nice. [Her] education is… good.”

Radhika’s education is an accessory to make her a more desirable bachelorette, rather than seen as a path to a freestanding career.

In the fifth episode, we see a montage of silk, jewel embroidered saris, and heavyset heritage jewelry that Akshay’s mother has set aside to gift to her future daughter-in-law, already preparing a presentable addition to the family. It’s an unspoken understanding that Radhika will leave her family in Udaipur to move in with Akshay’s family in Mumbai, as well as give up her career as a chartered accountant to be a homemaker. In this case, Radhika’s education is an accessory to make her a more desirable bachelorette, rather than seen as a path to a freestanding career. It’s quite possible that her education is used to demonstrate both her intelligence and her family’s wealth (in being able to fund an advanced degree), with the sole purpose of becoming a  homemaker.

The series doesn’t present this as problematic because it’s documenting spaces where these conversations are happening and thriving, not being suppressed and dismantled. I would be disappointed if these tenets, which are so central to the matchmaking process, were glossed over in an attempt to make the process seem even more palatable to a Western audience.

It’s comforting to see a Western audience understand these processes, but it also means we have to explain the less rosy aspects of Indian matchmaking.

I also see the value of this service that traditional matchmakers like Sima provide. Often, looking for a partner is unpredictable, and our preferences like “good sense of humor” and “ambition and drive” aren’t filters that can be applied on a mobile dating app. If it reaches a point in your life where you want to settle down with a traditional partner who shares a cultural understanding and is equally ready for commitment and kids, it’s likely you’d find the right kind of person much more easily through a matchmaker than just about any other method. Sima’s process of setting up her clients to meet, talk, and determine their chemistry is exactly what I would expect if I pursued the matchmaking process.

“I assumed an arranged marriage meant your family would just decide,” my (very Caucasian) boyfriend told me after we’d both watched the first few episodes of the Netflix show. “I didn’t realize you could consider multiple people and say no.” A handful of generations ago, this assumption would be true. But today, the institution of matchmaking and arranged marriage has adapted to a hybrid model. Though I see my future now with my current boyfriend, whom I often joke that I would never have agreed to meet based on his characteristics “on paper,” I see the value in traditional matchmaking as a cultural institution. The only reason I thought I would seek a matchmaker myself is to find someone who shares my values and goals, who gets along with my family, and who pushes me personally and professionally. I happened to organically find that person myself. On that front, I consider myself lucky.

It’s comforting to see a Western audience understand the processes that undoubtedly seem alien to many (just as “love marriages” seemed alien within my parents’ circle when they tied the knot), but it also means that we have to explain the less rosy aspects of Indian matchmaking. To its credit, the Netflix show reframes the drivers for marriage to one many South Asians understand: a mixture of rationality, duty, and compatibility. Along the way, the series captures prejudices that are uniquely highlighted throughout the process of looking for an arranged spouse, and those need to be addressed. If the show gets picked up for another season, hopefully, we’ll see some progress.