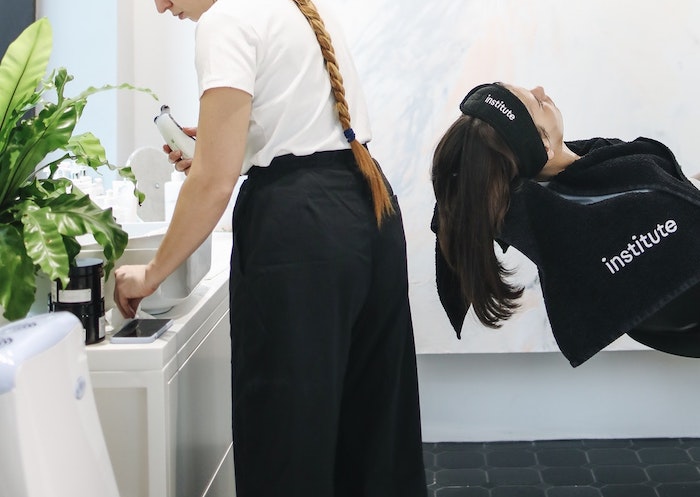 There is something different about my face.

At 4 months old, an unfortunate combination of still-scalding water in a bottle of baby formula, a loose cap, and perhaps an over-tired caregiver, resulted in a burn scar about the size of a gold dollar coin on the left corner of my mouth. Throughout my childhood, I received endless stares and unsolicited questions from friends, neighbors, and strangers alike, and I often found myself hiding my face behind my hair to avoid unwanted attention.

When I was four years old, I went through minimally invasive surgery due to the position of the scar tissue inhibiting my mouth from opening all the way. In a matter of a few hours, the surgeons had made some small adjustments, ensuring that my mouth would be fully functional and shifting the scar in such a way that it would fold into the lines around my mouth as I got older. The stitches and redness healed in only a few weeks, but I still remember the shame and embarrassment of my scar being even more prominent on my small face than usual.

As a teenager, I’d stand in front of the mirror, alternately covering and uncovering the little patch of skin with my hand, wondering what I’d look like without it. I ran my fingers over it, feeling the contrast between smooth and wrinkled. I imagined peeling it off like a sticker, finding “normal” skin underneath.

When I got a little older, my family offered me the option of cosmetic surgery to reduce the scar and make it less noticeable. I’ve considered it, but even at the height of my discomfort, it didn’t feel right to change something that was so fundamentally a part of me. The idea has barely crossed my mind since — until recently, scrolling through Instagram.

I noticed several posts in my Explore page that recommended cosmetic surgery. Most of them promoted lip fillers or some light, Botox-style procedure, like a brow lift. I follow a small handful of people on YouTube and Instagram who have openly discussed their procedures, from lash extensions to filler to breast augmentation. Most of these women are fairly young, in their 20s and early 30s, white, and relatively wealthy. And they all look more or less the same.

Apparently this phenomenon is fairly common and known as the Instagram Face, a phrase popularized by Jia Tolentino’s recent piece in the New Yorker.  “[Kim] Kardashian West, who has inspired countless cosmetically altered doppelgängers, insists that she hasn’t had major plastic surgery; according to her, it’s all just Botox, fillers, and makeup,” Tolentino writes. “But she also hasn’t tried to hide how her appearance has changed. In 2015, she published a coffee-table book of selfies, called ‘Selfish,’ which begins when she is beautiful the way a human is beautiful and ends when she’s beautiful in the manner of a computer animation.”

Tolentino explains that the dramatic effects of Instagram Face can range from the Kardashians, who have top-of-the-line cosmetic surgeons readily available, to subtle fillers here and there to make the face appear more symmetrical. YouTubers and Instagram influencers show off the results on their feeds, with many of their followers commenting back with encouragement.

Instagram Face largely emulates “ethnically ambiguous” features — that is, features that perpetrators of Eurocentric beauty standards have deemed acceptable and coveted while dismissing other features they find undesirable. As an Asian-American woman, my flat nose bridge, smaller eyes, and thinner lips are not included in this metric.

“There was something strange about the racial aspect of Instagram Face,” Tolentino writes. “It was as if the algorithmic tendency to flatten everything into a composite of greatest hits had resulted in a beauty ideal that favored white women capable of manufacturing a look of rootless exoticism.”

21-year-old YouTuber Alana Arbucci details the procedures she’s undergone in many of her videos, which include laser hair removal, filler for her nose, lips, cheeks, and undereyes, butt and hip injections, and breast augmentation. Arbucci paid $850 for her non-surgical nose job and asked the clinic if she could film and post the process on her channel. In exchange, the clinic offered her a complementary treatment and she opted for lip filler. In building this relationship with the clinic, Arbucci also promotes a $50 off discount in the description of the video.

According to YouTuber Tiffany Ferg in her video about cosmetic procedures advertised on social media, influencers like Arbucci often receive a partially or fully discounted service, are paid a commission for referrals and participate in sponsorships in exchange for a dedicated video or Instagram post. This is a way for clinics or surgeons to market their services with a real person presenting the results.

Most of the non-surgical options also require touch-ups every few months. For example, different types of injectables for lips last for varying amounts of time. According to Healthline, the product Vollure lasts 18 months, while collagen only lasts for 3 months. Even on the lower end of the price range, topping up a filler every three months would cost more than $2,000 per year.

These prices may not be as astronomical as more invasive cosmetic surgery, but they are still prohibitive for many women, especially those from marginalized communities. Trans women who seek procedures to further affirm their gender and prevent harassment or discrimination often do not have access to that amount of money.  According to a paper published in the National Library of Medicine, because procedures like facial feminization surgery are considered strictly cosmetic, they are also excluded from insurance coverage in most places.

The combination of Instagram increasingly normalizing cosmetic procedures, subtle changes toward perfection, and the high price tag that comes with it can leave a lot of young women feeling insecure — and broke.

“If it required a big expensive surgery, you might not be able to do it, but because these prices are more accessible, it doesn’t seem as crazy to spend,” Ferg said. “That kind of changes the lengths that people will go to. It’s not too much of a stretch to where you can’t justify it.”

As Arbucci emphasizes in many of her videos, you can’t buy self-love and self-confidence. However, with the advent of these cosmetic procedures, you can adjust your face and even your body to change with the ever-evolving beauty standards. Unlike makeup, it doesn’t just wash off at the end of the day.

“Once you build up this appearance, you have to pay to maintain it and otherwise face the fact that you’re going to look different and maybe look worse,” Ferg added. “It moves the goalposts of what you consider beautiful about yourself. With every new little routine you add, it adds up.”

You Don’t Need To Change Your Face

I am now 24 and as comfortable as I can be in my own skin. As I grew older, I also grew up and with a lot of hard work, I slowly allowed myself to accept that it’s not wrong to look different. As cliche as it may be, literally no one in the world is perfect, and while it is their prerogative for those who choose to do so, buying “perfection” is definitely not accessible to everyone.

I am now also immensely grateful that 20 years ago, a team of doctors and surgeons made a few minor changes to allow me to eat, breathe, and smile without restriction. I am cognizant of the fact that my scar, ultimately, is minimal and poses no health risk. Not everyone who needs it has the privilege of healthcare and medical intervention.

My scar has faded over time and when I do catch the occasional stare, I no longer care. I don’t attempt to hide behind my hair, and I have never tried to cover my scar with makeup. Most of the people in my life have said they forget I even have it at all.

Really, the lesson here is a good, old-fashioned one about learning to accept yourself for who you are. There’s nothing new about that, but in a culture that’s constantly convincing you to literally change your face through filters, Facetune, or cosmetic surgery, it bears repeating now more than ever. My face might not fit the beauty standards social media imposes on me, but there is something different about it, and I think that makes it more interesting — and maybe even more beautiful.

Lian is a 24-year-old living in Boston with her partner.