How My Life Looks After 30 Days Of Decluttering 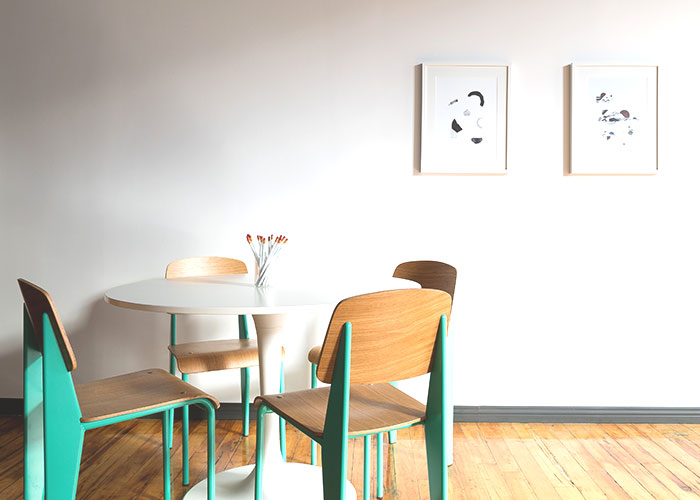 This week, I finally moved out of the apartment I’ve lived in for three years, and into one with my boyfriend, Peter. I say “finally” because it feels like it’s been such a long time coming — we moved Peter’s stuff into the new apartment (a one-bedroom in the same building where he used to live in a studio) over two months ago, and ever since, moving my stuff felt like the biggest weight on my shoulders. I had a substantial amount of decluttering and organizing my stuff to do, which is why I started this challenge in the first place. I wanted to clear my life of excess stuff, and organize the things I was keeping, before moving into this apartment where the common spaces have even more overlap than the ones I shared with roommates.

Do you ever have those moments where you complete a very basic human activity, yet you still feel disproportionately proud of yourself? That is me with this decluttering challenge and move. It is no big feat to clear out your home and move into a new one — especially when those homes are small New York apartments that don’t even have room for you to collect as much crap as you could if you were in a more “livable” city. Moving sucks, but tons of people do it. Often. Yet, because this was the first time I ever moved all on my own — meaning, without my parents holding my hand through the process of finding an apartment, and literally driving up from Atlanta to help me move (they’ve done this twice) — I’m still kind of amazed that I was able to rent a U-haul and move everything I owned from one part of town to another in just a few hours. To recap, here’s the list of everything I wanted to clean out before moving: 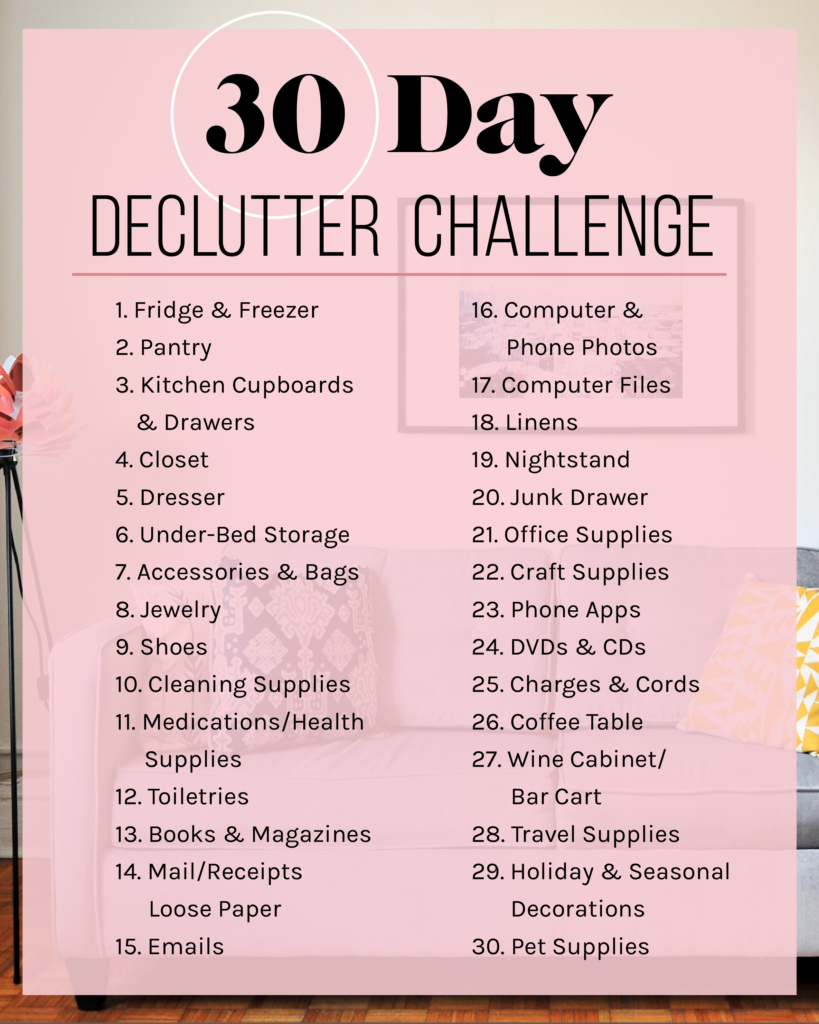 I’m going to admit right now that I did not achieve everything on this list. For example, I didn’t really have a “junk drawer” to speak of in my old apartment — not because I wouldn’t have loved a random drawer to throw whatever the hell I felt like into, we just simply didn’t have enough drawers. And thankfully, my phone and computer aren’t wanting for more space at the moment, because I fully ignored anything digital listed here. In fact, my normally inbox-zero work email is looking incredibly sad and disorganized at the moment, because dealing with sorting through emails has been the last thing on my to-do list the past week or so. (To be clear, the emails are all unread, but there are about 35 of them just sitting there, waiting to be sorted into the appropriate folders.)

Everything I did finish, for the most part, was relatively painless. My medical supplies consisted of a few bottles of ibuprofen and one giant jar of expired women’s vitamins, which I threw out (victory, I guess?). Organizing my travel supplies has meant storing my smaller bags in my larger suitcase. Sifting through my holiday decorations was easy, because it consisted of keeping everything in the tote bags they were already in, and throwing out the cute-but-mangy-looking paper wreaths I made a few years back. I also didn’t have extra linens to sort through; the entirety of my linens contains two sets of towels and bedsheets, and a couple of comforters.

Organizing my DVDs and CDs has also been easy, because I decided to simply donate all of them. It’s a little sad; I used to spend so much of my leftover money on the $5 movie bin at Barnes & Noble, and I dreamed of having a giant DVD library. But now they are all simply more stuff I don’t need. I hardly ever watched them in my old apartment, and I certainly won’t now that I don’t even have my roommate’s Xbox to view them with. I am working through digitizing my DVDs (read: having Peter do it) so that I don’t lose all the movies I may want to watch one day, but I can’t wait to get the big box of them out of my apartment.

One thing I’m glad I spent a little more time on was my jewelry. I have a couple of clear plastic organizers that, in theory, make it easy to organize it all, but that ended up in me just throwing things in their general vicinity, to the point where they looked like this: 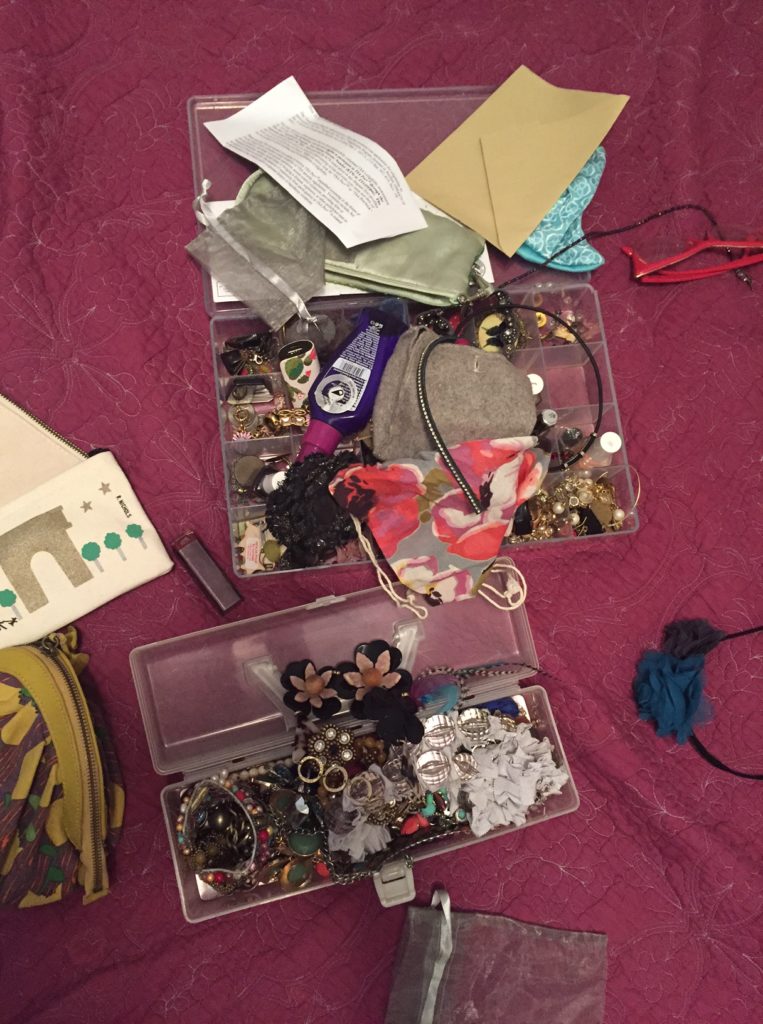 I knew I wasn’t wearing half of the stuff here, and even though nothing I own is expensive/fine jewelry, I wasn’t treating any of it nicely by tossing it haphazardly onto my dresser. Here’s how it looks after some much-needed sifting (and donating roughly half of it): 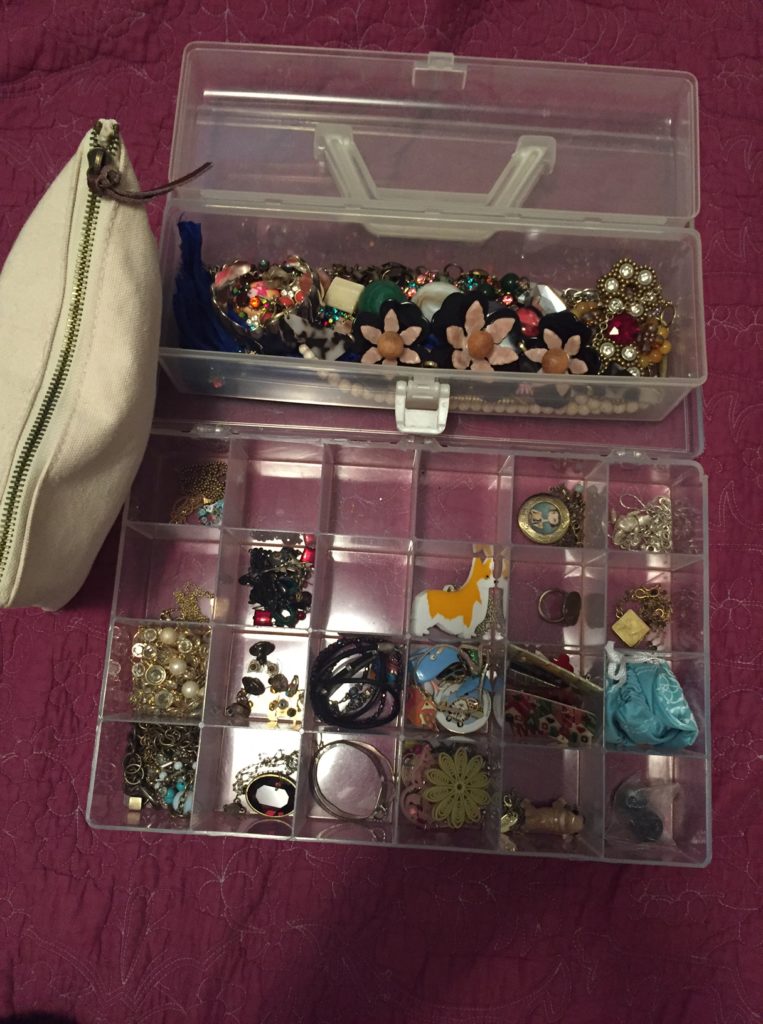 I made sure to put necklaces in their own compartments, so that they don’t get tangled up in one another. I also unearthed a few pairs of beloved earrings that I’d sort of forgotten about, because they were so out of sight. I’m now more excited to pick out the accessories I want to wear each day, because they are so clearly on display in my bedroom. I should also mention that sifting through my jewelry box specifically is something that I’ve been putting off for maybe a year — and it took me all of 30 minutes to do.

So, if there’s any pattern for me to notice here, it’s that none of the parts of this challenge individually took very long to do. I know that’s a truth a lot of people figured out a long time ago (or even grew up knowing), but it’s still motivating for me to move into this new apartment on a good foot, clutter-wise. And of course, my stuff-situation still isn’t perfect; I need a new organizational system for important documents and such; I still have plenty of pictures I need to hang up; I certainly still feel like I could still manage to get rid of some clothes, even after giving several garbage bags-worth of them away. But it’s good to feel like I didn’t move into my new place with a bunch of excess, and I’m hopeful that will make not acquiring more to be a lot easier.