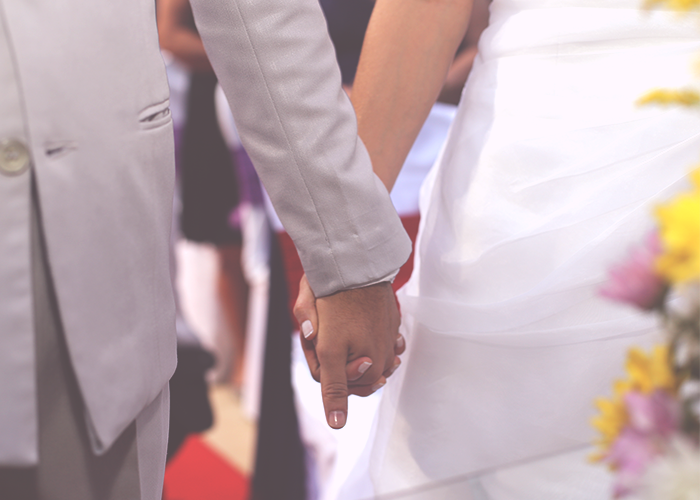 If you’ve ever watched Sex and the City, you’ll probably remember that the gals would occasionally refer to the (bougie) New York Times Wedding Announcement section several times over the course of the show’s six seasons. Sometimes, I, too, would read it for fun because the announcements always sounded a bit over-the-top, status obsessed, and cherry picked — it was amusing to poke fun of how scripted it sounded. It almost came across as if the paper was referring to individuals who had strategically made decisions about life, school, work, and dating, so it would sound as prestigious as possible in a one-day nuptials write-up.

Well, I stumbled upon this article on Vox the other week called How Love And Marriage Are Changing, According To 63,000 New York Times Wedding Announcements. In the article, author Todd Schneider describes how he built a piece of software called Wedding Crunchers, which organized all the data from every NY Times wedding announcement since 1981. With that data, it was able to generate interesting stats and charts pulled from the information provided in over 63,000 announcements. There is a TON of information to look through in this article, but these are just three of the overarching trends Todd noted:

1. The modern announcements focus less on debutante culture and more on people of diverse religious backgrounds. 2. The average age of the people in wedding announcements is increasing. 3. Technology plays a more prominent role: Many couples now meet online, and tech companies account for an increasing percentage of employers.

Pretty amazing, right? But, part of me thought…so? How useful could wedding announcement data so NYC specific possibly be? Turns out very useful.

The statistics presented in the post illustrated larger trends that affect not only New Yorkers, but the larger U.S. population as well. It serves as a small window through which we can gain insight into what marriage and love looks like for the whole of society in 2016 — especially women. I was curious to see how applicable the facts from Wedding Crunchers were for the entire country. I, myself, got married a few months ago, and I honestly had little idea whether or not my age, education level, income, living situation, and religious affiliation was normal, above average, or below average. So, I did some digging to see what marriage looks like for women, specifically, in 2016.

After looking around online for information that could helped contextualize my own situation, I found some pretty interesting stats. (And, for the sake of simplicity, I looked at data in the same time period Todd’s software covered — 1980 to now.) I found out that the average age of first marriage in the United States is 27 for women, which is up from 22 in 1980. This illustrates a growing trend that marriage is happening later on in life, as more women are delaying it to focus/prioritize other things. Some articles report that this is because they’re focusing on themselves for a longer period of time, and establishing their careers and personal lives before rushing down the aisle. (Also, some studies claim that fear of divorce plays a not insignificant role.) Women who are getting married are also much more educated than they have ever been, and according to FactTank, “college-educated women have an almost eight-in-ten chance of still being married after two decades.” It seems that for women marrying later, being college-educated is hugely beneficial. An article on The Atlantic claims, “They can enjoy the greater economic security that comes with marrying later, while still being able to have children in the relatively stable context of marriage.”

So, why are more women getting married later and pushing off marriage to a later stage in life? A Time Money article talks a little bit about this trend and comments on the reason why the overall percentage of women getting married might be falling. The article claims, “Na’ama Shenhav, a Ph.D. candidate at the University of California, contends that women’s rising earnings relative to men’s is responsible for about 20% of the decline in the marriage rate.” The same article also claims that women are less likely to get hitched because they don’t need a man for job and financial security the way they might have at one point. This is good news, but it should be noted that single women (with a single-income household) need to battle against sluggish wage gains, which aren’t significant enough to keep up with the increasing cost of living.

So, why should we care if women are getting married later on in life, are more educated when they do so, have more career flexibility, etc.? Personally, I think it’s useful to understand the ways in which our society is becoming more “progressive,” and how that translates into social practices, they way it influences workplace dynamics, affects birthrates, politics, health issues, etc. When we understand one aspect of our country’s social fabric, we can better understand the shifting mentalities about a number of things, and why young people are making certain choices. It’s important to understand what factors inform others, and the ripple effects they create.

For example, birth control vastly changed (and continues to change) how women viewed marriage, and this article explains it saying, “With the use of birth control, choosing not to get married didn’t have to mean choosing between abstinence or unwanted pregnancy. That made it easier for women, in particular, to choose careers that required more education, and made living alone more attractive for everybody.” We have yet to see how the trend of later marriages will affect future generations, and to me, staying abreast of these changes helps me get a more complete understanding of our society and it’s values/priorities.

After reading through the original Vox article, in addition to a bunch of supplementary articles I read for research, I’m able to more fully understand how I, myself, fit into these numbers. In my humble opinion, I think it’s good that the average age men and women are getting married at is on the rise. To me, it’s indicative of people pausing and taking stock of their options and fully considering what they want out of their life, career, and work, more so than couples from previous generations. Seeing more couples who are acknowledging they aren’t financially stable enough to get married is a comforting statistic because it means more people are being honest and realistic about their future — not just winging it, and hoping it all works out.

It makes me feel proud to be a woman living in a time where our financial security isn’t as strongly tied to the health of our husband’s finances and jobs as it once was, and allows us to take our time making important choices. I deeply cherish living (and having gotten married) in a time where I have infinitely more options available to me. I know I have the social flexibility and career confidence to make my own choices about my future, and that society won’t punish me for wanting those things. I know I can stand on my own two feet, and it feels good when I read various articles across multiple platforms which reaffirm the choices I’ve made, and that what I want for future self is perfectly cool.