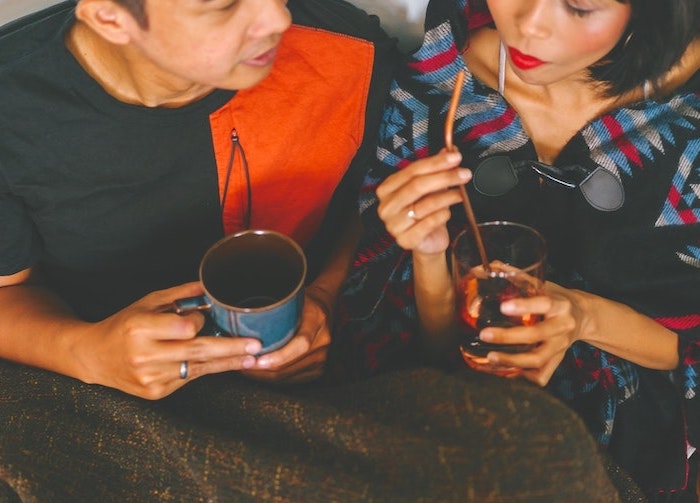 My boyfriend and I met at the end of November and both agreed that living together wasn’t something either of us wanted to do anytime soon. We were both living without roommates for the first time in our lives and loving it. Fast forward to March when our city declared a state of emergency and Justin Trudeau politely asked all Canadians to stay inside, and now we’ve found ourselves living together.

We joke that in the first two months of our relationship we already went through enough milestones to last the year – the first month after we met, we were literally on other sides of the world from each other. When we were both back in Ottawa for January, we took turns experiencing sinus infections and hospitalizations. The third month into our relationship, we accidentally moved in together. Once the isolation order was announced, my boyfriend packed enough clothes to be able to live at my house for a couple of weeks. When my sister and her partner (thankfully) were able to cross the border from Australia, they had to isolate themselves from the outside world for two weeks, so we gave up my home for them and moved into his 500 sq ft condo outfitted with a desk, one chair, and a bed.

When your city shuts down and only essential businesses are allowed to remain open,  there’s not a whole lot to spend your money on except stocking up on meat to freeze and 10kg bags of flour to bake with. While my boyfriend is one of the few still employed through the pandemic, I’m out of work, making our financial situations drastically different. We quickly had to discuss how we’d be spending our money uncertain about the length of the pandemic, job security, and availability of social benefits.

Instead of approaching our accidental arrangement as a down-to-the-penny 50/50 split, we’re taking turns paying for groceries and alcohol with the mentality things will work out relatively evenly by the end of quarantine. Not only does this remove a lot of anxiety I have around finances, but it also takes away the need to have tough conversations about what each person wants to buy that week (If he wants chocolate he doesn’t have to ask, and if I want more popcorn I don’t need his blessing). We take time to make a detailed shopping list based on what we want to eat and drink that week, selecting items that can be used for multiple dishes (e.g., a ham for slicing up for casserole, frying with eggs for breakfast, and roasting for a comfort meal), for batch cooking (e.g., vegan chili, soups, broccoli casseroles), and for baking pantry essentials. Along with everyone else in isolation, we quickly discovered just how cheap and easy it was to bake our own bread and sweets. We spent approximately $200 in March on beer, wine and spirits, approximately $300 on groceries (including using my Costco yearly cashback check), and $110 on restaurants (we’re still trying to support local businesses). That works out to $305 each, much less than either of us would’ve paid on our own.

After a few glasses of wine, we broached the topic of one of us giving up our apartment to reduce the financial burden during this uncertain time. Given that we’re each paying around $1600 a month in rent — him for a one-bedroom condo downtown, and me for a two-bedroom two-story townhome in the suburbs —  yet spending our time together in one location, it seemed fiscally irresponsible to pay two rents. We agreed, but our decision to move into one living space wouldn’t be locked in for the long-term, and that it would still be up for discussion once the emergency state was lifted on our city.

Thankfully we’re both fairly conscious of our spending and already weren’t in the habit of going out for dates. We already played board games, watched docuseries on Netflix, or cooked together, so the isolation directive didn’t affect our time together much. What it has affected is the trajectory of our relationship. If you’d have told me six months ago, I’d be living with my next boyfriend after just three months of dating, I’d have said you were insane. The last (and only) partner I lived with, I dated for almost four years before coming to that decision, and I hated sharing my space with my partner. Now, I’m hardly affected by it (except for his insistence on leaving the closet doors open), and he keeps saying he doesn’t want to kill me yet (despite constant warnings from my parents that I’m extremely annoying to live with). We’re learning about each other’s habits, including financial ones, much quicker than your average relationship. While we have been forced to start sharing household expenses and discussed officially sharing rent, we still maintain confidentiality about how our investments and savings are doing in this climate, and we’re not about to combine finances anytime soon.

Overall, we think the pandemic state will force a lot of couples now confined to small spaces to explore a lot of those previously taboo topics, including finances, much earlier than they may have been ready for. We also hypothesize a surge in breakups and divorces once the isolation order is lifted, though we don’t see one in our future. We quickly learned to give each other space to engage in our own activities, time to video chat or call our friends and families, and share in cooking and cleaning to keep us sane. It’s not a situation I thought I would be in this early in my relationship, but with some planning and understanding, we’re making it work.