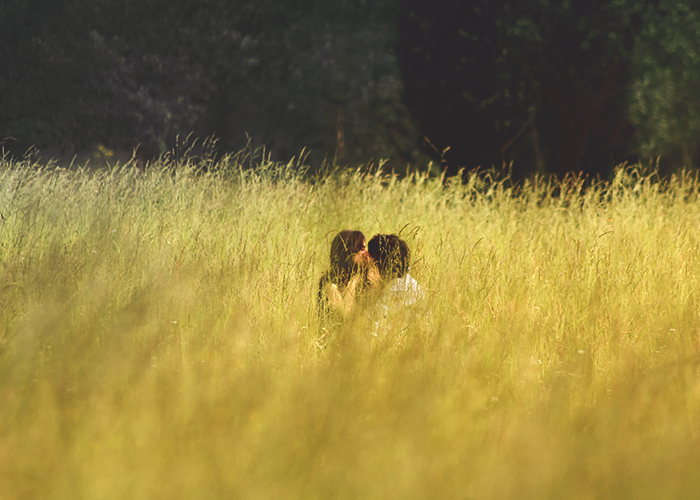 For the first year I lived in New York, I worked as a leasing office assistant for a large development company. I was a floater, showing people apartments at different luxury buildings throughout the fancier parts of Manhattan and Queens. Most of the people buying apartments were couples, often searching for a place to move in together for the first time. They were likely relocating from two different, less-expensive parts of the city. Now that they were sharing rent, they would be able to afford a one-bedroom in a pricier area that a single person would only be able to afford if they had substantial income.

I was single for the entire time I worked for the development company — in fact, I was single for my entire life, until I met my current boyfriend — and let me tell you, I would sometimes get so jealous of these couples I’d show apartments to. I was so far from being able to afford a place like that, and even though I didn’t really want to live in a high-rise luxury building at all, I saw the freedom they had, and thought there must be something to this whole “having a partner” thing.

A lot of those people were, no doubt, falling into the trap that people say is true of so many New Yorkers: moving in with someone prematurely because the rent is so much cheaper. While I was envious of the supposed greater financial freedom they had, I also made a promise to myself that I would never make that mistake. If I ever was to find myself as part of a relationship, it would be years before I would even consider moving in with the guy. I’d still have my own separate life for a good long time. At that point, I’d made it 23 years on my own, so I didn’t need to jump into something so quickly the way other people in the city would.

I’ve been dating my boyfriend, Peter, for eight months now; we don’t live together, and we don’t plan to anytime soon. But now that I’m actually experiencing being in a relationship first-hand, I understand that the relationship privilege I saw in the leasing office is real — and it extends far beyond a combined rental capacity.

Maybe this is just because of who I’m specifically dating, but I feel like I simply don’t spend as much money now that I’m no longer single, even though Peter and I don’t split any living costs (rent, utilities, internet, etc.). Take food, for example: he gets one of those box subscriptions that delivers ingredients for three meals for two people every week. He told me early on that a lot of his food would go to waste before we were dating, so I’ve always been welcome to eat the second serving of every meal, and I’ve never been asked to pay for it. I make dinner pretty often, too, but I still pretty much make the same amount of something as I did before, and the leftovers I would end up having to throw away are now generally going to Peter. Even though I’m cooking for another person more often, usually nothing gets wasted. (I realize throwing away food is a dumpster-fire situation, and I would always feel bad, but now I don’t have to worry as much about making too much food…yet another privilege.) I go grocery shopping less often as a result of meal sharing. I haven’t actually compared my spending, but I bet I’ve saved a lot.

Peter and I also have an income disparity; it’s a lot easier for him to be the one who pays for something than it is for me. Earlier this year, I was going through a hard time, financially, and he would regularly pick up my portion of a check so that I wouldn’t have to miss out on getting a bite with friends. Even though I didn’t necessarily like how those moments would make me feel a little helpless, I can’t deny that it’s a privilege to have someone who’s willing and able to pay for something when you can’t.

And I know that’s not everyone’s relationship experience, and that I just happen to be dating someone who earns a significant amount more than me. But there are other privileges that come along with dating someone, too. You’re assumed to be the plus-one at weddings, and automatically invited to family gatherings. You get invited to go with them to visit their friends in other cities, essentially doubling your free places to crash. If they have cable and you don’t, you can mooch on the reg. Whatever streaming service passwords they have from friends and parents — you basically have those now, too.

And don’t get me started on travel: it is tremendously easier when you have someone you’re splitting costs with and you also happen to be sharing a bed. We went to Hudson, New York for the Fourth of July this year (a town I would recommend pretty much any other weekend of the year because, as we found out, they do not hold any fireworks). I simply wouldn’t have been able to afford such a nice place to stay on my own, or if I’d been going with a friend and we needed two beds. Also, the Airbnb was a refurbished schoolhouse in the middle of a cemetery. If I’d been traveling alone, I would have made sure I was back before sunset each night, because that walk was creepy enough with another person next to me.

I also understand the draw of moving in very early into dating now, because wow would the savings be killer. If you’re already spending most nights with a person, doesn’t it make more sense to get a place together, and cut down on what’s likely your biggest expense as a city dweller? Or, even if you’re not actually cutting down on it, getting way more space or nicer amenities for essentially what you’re paying to have to share a bathroom with two roommates? It’s hard to resist the temptation of living in a better apartment in a better neighborhood for the same price you’re paying now (aside from the fact that moving is ~the worst~ and you like living with your roommates, anyway).

But the most noticeable part, I’ve found, is that people assume you are automatically better off and happier once you are in a relationship. The positives of dating Peter are innumerable, but I want to be clear to people that I’m happy because of the person I’m with, not just the simple fact that I’m with a person. I wish my relationship status didn’t have any effect on my perceived happiness or success to others. It’s not really a secret that society favors people who are partnered up; I don’t feel I need to explain this when the enormous wedding industry is A Thing, and #relationshipgoals is something people comment on famous strangers’ Instagram photos. Being on this side of things makes me a little sad for (and feel some solidarity with) my former single self and others like her. Because I don’t think anyone is necessarily better off with a partner, and it’s unfortunately factual that some things are just made easier for you when you’re in a relationship. When I talk to my single friends about dating or money, that’s just something I have to remind myself.