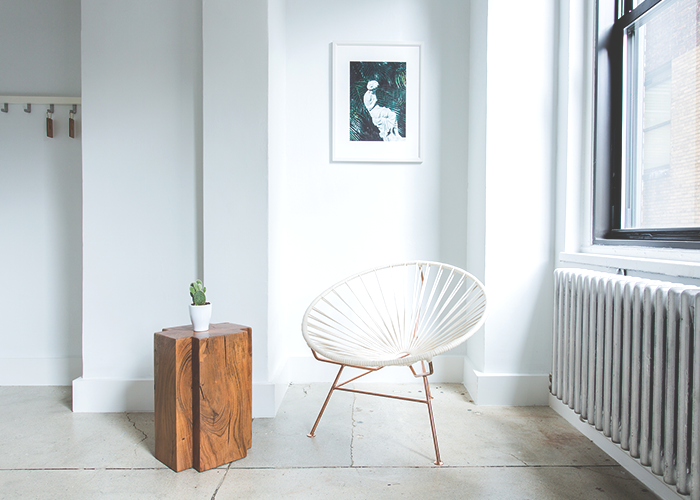 As you may or may not know, I have a clutter problem. I’m actively trying to work against it, but I’d be lying if I told you I’d succeeded. I’ve cleaned out a lot of stuff, yes, but I don’t have an organizational system in place, and I still have a few piles of things to tackle. I feel like, no matter how much I feel like I’m not spending, I am always acquiring things, anyway. Hopefully one day, I’ll adopt the habit of cleaning more regularly — getting rid of one thing for each item I acquire. For now, I’m just glad my bed is made and my floor is clear.

Personally speaking, it’s very easy to poke around on the internet and fall into a shame spiral about my messy habits. I regularly look at the Homepolish Instagram, and think about how much better my life would be if in one of those rooms (and then I want gouge my eyes out because they’re all so freakin’ beautiful). Of course, it wouldn’t be better, but I would eliminate a lot of the anxiety simmering in my day-to-day. I don’t know what gene I’m missing for this not to be enough motivation to just get my act together, but thus is life.

Yesterday, I came across the Quartz headline, “The psychological benefits of giving up on cleaning and embracing the mess.” I was intrigued for two reasons. One was that I feel like the psychological benefits of cleaning up are well-documented, and have even been proven in my own experience, so I was curious about the other side of that argument. The other was that maybe this will give me an excuse to try less, and just embrace my clutter. Of course, after reading, that’s not exactly what it encouraged. In the article, economist Tim Harford explores an underlying problem with trying to hard to be organized:

Sometimes, we place too much faith in the idea that if something looks well-organized, then we’ve got our lives under control.

He goes on to discuss a study from 2001, in which researchers from AT&T Labs examined the behaviors of people who were “filers” versus people who were “pilers.” The filers would meticulously organize paperwork as soon as they received it, regardless of whether they would actually end up needing it later on. When they had to clean out their filing systems during a move, many filers were “tormented” by being forced to clean out their files. They’d grown attached to an organizational system, and were devastated at having to upend them. By being too rigid in how they organized things, even needing to add a little flexibility threw a wrench in the whole system.

It’s important to note that not being too stringent in your organizational system, as in the case of these workers, is not the same as keeping relatively organized and clean; you can still have a good organizational system in place that offers flexibility in case a change arises. Being too rigid actually sounds a lot more like a clutter habit than neatness in this case, because these people would be holding onto things they didn’t need for years.

Harford also discusses another psychological study from the 1980s, in which the researchers divided university undergraduates in a study-skills course into two groups. One was advised to set monthly study-related goals, while the other made specific goals and activities on a day-to-day basis. As you may have guessed, the daily-goals group ended up failing: if something were to throw off the students’ plans, they would become demotivated, and they likely ended up putting off other goals or giving up completely as a result. Conversely, the students with monthly plans were more successful in reaching their goals As Harford points out:

A rigid structure is inherently fragile. Better for both your peace of mind and your productivity to improvise a little more often.

I have to say, though I can’t use this as an excuse to let clutter completely take over my life — putting away clean clothes, for example, isn’t optional — this is something I needed to hear. I am much more organized in my work life than my home life. I categorize emails into literally dozens of folders and sub-folders, use a trusty bullet journal

in which I make daily to-do lists, love color-coding

, and set reminders for myself when I need to get things done at a certain time. But I also know that my most productive or best work days aren’t necessarily the ones where I’ve written everything down. Sometimes, all it takes is a change of scenery or a mid-day yoga break (or…a nap) to get me re-energized, and allow me to finish even more than I planned.

So go ahead — have a junk drawer. Don’t meticulously organize the spice rack. Leave the books you’ve read halfway stacked up on your nightstand. Keep the ugly bag of cat food in plain sight. Don’t fret over not being at “inbox zero.” But remember, it’s a two-way street (and I’m saying this as much for myself as anyone else); if something’s not being used, throw it out, or give it away. It might make space for something great.