The Free, Life-Affirming Activity That Helped Me Transition Back to Being Single 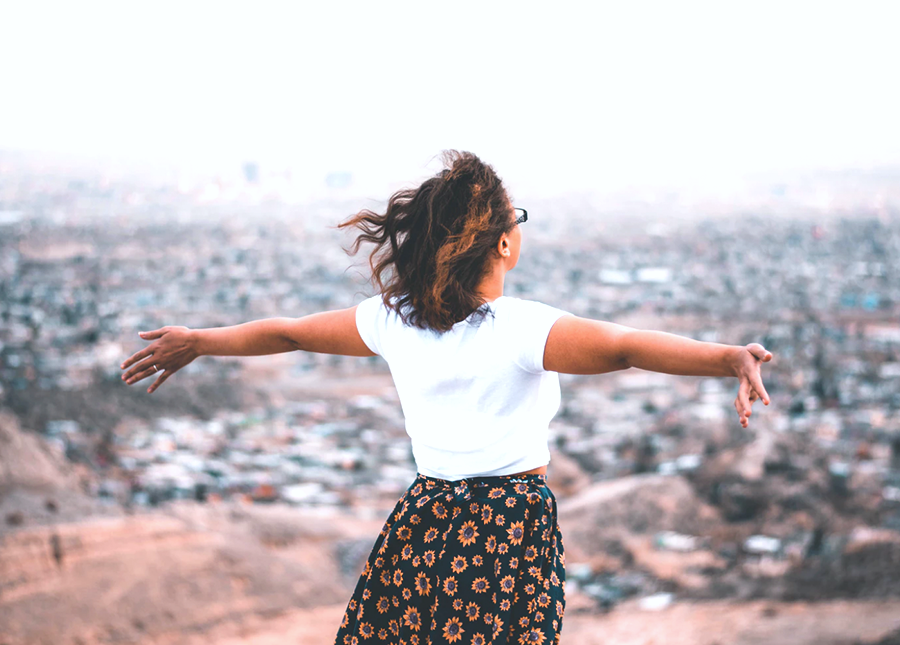 Just before Christmas, right before my long-term partner and I broke up (and I moved back to England, and he returned to Singapore), we had one last, rather strange holiday in Bali. He stayed for the weekend, and then left me alone in a tiny guest house in Ubud for a week. It hadn’t quite sunken in that I was single yet. I wasn’t sure what I was meant to do with myself — cry, do yoga, go out dancing.

To add to the already strange atmosphere, there was the threat of a volcano erupting, and many of the tourists had fled the island. I was the only guest at the hotel, and the first night, after eating dinner alone in a café around the corner, I walked past the area where guests eat breakfast. There I saw the hotel owner and his wife chatting with a friend. They smiled at me and gestured that I should sit with them. Part of me wanted to scuttle back to my hotel room and hide from the world, but I ignored my instincts and sat with them. We had a long conversation — the Canadian hotel owner, his Indonesian wife, a retired American woman who spent every summer in Bali, and me. I talked with these almost-complete-strangers until one in the morning, and then fell into bed.

When I woke up, I noticed I didn’t feel quite as sad and lonely and bereft as I had been the morning before. I felt better somehow. I felt calm and full of hope. The next day, I rode on the back of motorcycles into town, letting the drivers overcharge me because they were losing money every day the volcano threat loomed. I wore sunglasses just in case a sudden bout of weeping came upon me in the street, and for a few hours before bed every night, I sat with the three strangers and talked.

It reminded me of a passage from Doris Lessing‘s “The Roads Of London,” when she wrote about the dynamic of the family home after the introduction of television. That before the television was brought in to “sit like a toad in the corner,” the family kitchen was a place where people would come home from work and talk solidly with one another for six hours. Not just polite conversation, but arguing, shouting, telling dirty jokes, kissing and making up before bed. She called the television “the end of an exuberant verbal culture.”

Something about bouncing ideas and opinions off of a group of people replicated the quiet domesticity of the conversations you have in a relationship. Talking to someone about the fact that you really miss the foil wrapper Kit-Kats used to come in because you could run your nail across the foil in between the chocolate fingers, or that you are going to make an active effort to use the word “Oomska” more often in sentences. Sometimes sharing things can feel awkward or trivial or silly, but with it comes the unmistakable feeling of being propelled forward into something new.

I had been told by many seasoned divorcees that the first six months after the end of a long-term relationship were going to be rough, and they were. I veered between stoicism, diplomatically telling people I wasn’t upset and “I wished him well,” to feeling utterly heartbroken and ugly crying in my pajamas. I met so many wonderful new people, but very carefully moved through my new life. I wasn’t ready to date someone else, the relationship hadn’t ended well, and I was suffering from very low self-esteem, which I didn’t feel right burdening anyone with. I had a few encounters that could have gone somewhere, but I instinctively pulled away — it was too early, and I wasn’t done healing.

As a result, I developed the most wholesome social calendar any adult woman has ever had. I’m amazed I didn’t start a jigsaw puzzle immediately (update: I have since started doing jigsaw puzzles with my sister, highly recommended!). The first week I was back in England, I joined the Northampton arts lab, a group that came together after the comic writer Alan Moore started collaborating with creative writing students at my local University. We sit together every week planning radio shows, putting together magazines, and organizing performance evenings, and some weeks we plan nothing and simply sit around and share anecdotes or discuss what has happened in the news. Various comedians, writers, artists and protesters breeze in and out of our meetings, turning the direction of our conversation towards politics or history or funding cuts.

The group not only got me acquainted with the town I am now living in, it also introduced me to many new people, which helped me get used to explaining my new situation. My life had changed quite suddenly, and telling people about it helped me to get used to my new life and explain it to people with more confidence and certainty. When I was in a relationship, I relied on my partner to introduce me to people, but now I have to approach people and cultivate new relationships on my own. I have really surprised myself at times that I am more of an extrovert than I realized. It takes courage to walk into a room of total strangers and hold your own, but it has become a necessary part of making new friends and cultivating a social life and has since become second nature to me.

I feel like I have almost recovered from what happened, that I have transitioned back into being myself again — the person I was five years ago, with a little more wisdom and foresight and, most recently, with previously unimaginable levels of self-confidence and ambition. It’s remarkable how many layers of myself were occupied by a relationship, how much of my personality became a shared territory that I had to reclaim as my own. That it’s possible to be outgoing, or playful or silly, or share my ideas and opinions with people other than a man I used to live with and that, eventually, I could do it without being reminded of him.

I know now that I did make the right decision, that the person I am now is completely incompatible with my old life and my old relationship. I no longer feel hesitant or self-critical, and starting over is incredibly hard — but it’s better than staying with the wrong person. And I didn’t know at the time — that first night in the empty hotel, a few miles away from an active, smoking volcano amid the wreckage of a failed relationship — that I would move forward into an uncertain future and a new life, with the help of my friends and family and many evenings spent talking to many wonderful, sparky, funny people I hadn’t met yet.

Phoebe Prentice-Terry is a writer, teacher, and survivor of David Cameron’s various experiments in human misery. She likes Gin and Tonics, French skincare products, and is most proud of her collection of Wolford bodysuits.