The Microaggressions You’re Probably Committing At Work, And How To Stop Them 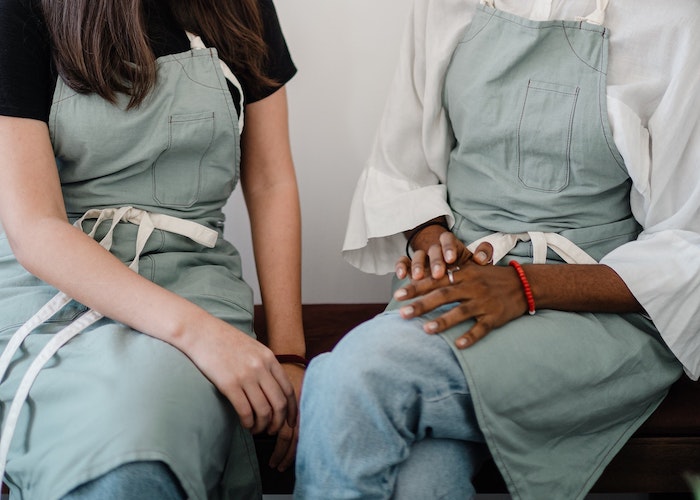 We’re living through a pivotal time in history, and there’s an overwhelming influx of new literature and etiquette being shared, learned, and taught to folks within all communities. To many Black people, everyday life hasn’t changed beyond white friends making seemingly-rehearsed wellness checks. For others, it’s been an admittedly uncomfortable confrontation with Ghosts of Ancestors Past, resulting in a haunting of white guilt.

Though it’s a long-overdue climb toward consciousness, I can imagine it has been daunting for leaders, self-proclaimed allies, and those just wanting to be less of a sh*t human to confront their privilege, prejudice, and ancestry. This has become a mysterious race where you know what the finish line looks like, but you’re puzzled as to the starting point.

Microaggressions serve as a bruising reminder that until we dismantle white supremacy, we will never be treated equally — not in society, not in our shared community, not even within our workplace. And that’s a heavy feeling to take on at the water cooler.

If I were to wager, I suspect the majority of white Americans don’t need a proper fireside chat on why overt racism is terrible but would be shocked to learn all of the everyday microaggressions they inflict on their Black and Brown counterparts, peers, and friends.

What’s a microaggression? So happy you asked. Grab a seat — let’s chat.

But first, while I will be focusing on the microaggressions most commonly experienced by Black and Brown employees, microaggressions can be hurled toward any underrepresented group and can meet at the intersection of race, gender, age, sexual orientation, physical, medical, or mental disabilities, and socioeconomic status.

What is a microaggression, anyway?

By definition, a microaggression is a “subtle, often unintentional, form of prejudice. Rather than an overt declaration of racism or sexism, a microaggression often takes the shape of an offhand comment, an inadvertently painful joke, or a pointed insult.” Put simply, a microaggression is an answer to the question when I tell one of my girlfriends, “Girl, you will never believe what Emily in Accounting said to me.” Meanwhile, Emily is likely unaware she said anything inappropriate at all.

It can be dressed as a compliment, a remark, or a well-intentioned question but is rooted, often unbeknownst to the speaker, in prejudice and stereotypical thinking. Most commonly, Black and Brown people experience microaggressions at work or in public spaces.

Common microaggressions include questions and comments such as:

“No, where are you really from?”

“Getting a little sassy, aren’t we?”

Or my personal favorite, “Wow, you are so well-spoken!”

What could be a purely curious question because you found someone’s features very beautiful, or a tone-deaf attempt to playfully deescalate heated small talk, or a backhanded compliment because someone exceeded your perceived expectations, spotlights the uneven playing field between employees of color and their white counterparts.

Why microaggressions  aren’t as harmless as they may seem

Microaggressions spotlight the stereotypes we as Black and Brown people have to fight each day and draw attention to the ordinary knapsack of white privilege afforded to our peers. This includes the privilege of not being asked ignorant or intrusive questions about your features, hair, or background. For me, microaggressions serve as a bruising reminder that until we dismantle white supremacy, we will never be treated equally — not in society, not in our shared community, not even within our workplace. And that’s a heavy feeling to take on at the water cooler.

To echo something Simba Runyowa, a writer for the Atlantic, shared, “It is certainly worth exploring microaggressions based on their link to implicit biases, and the ways in which they can both telegraph and contribute to the proliferation of more invidious, macro-level prejudices. Implicit biases have serious material consequences beyond hurt feelings, from discriminatory hiring to racial inequities in policing and the broader U.S. criminal-justice system. In other words, microaggressions matter because they seem to be both symptoms and causes of larger structural problems.”

Microaggressions are common in the workplace for various reasons. Most apparent, we’re still having elementary conversations regarding race, class, and civil rights. (You can buy a car that drives for you, but the idea that “driving while Black” is still an urban myth to some — go figure.)

Next, real-time education (i.e., correcting someone’s microaggression) is difficult as it is, imagine trying to correct someone at work — someone who may be your direct manager. As Black and Brown employees, we’re forced to determine if potentially compromising our good standing with a colleague or manager is worth the conversation. In fact, when it became a larger issue at a former employer, I founded our People of Color employee resource group because I couldn’t take it to anyone and had a limited workplace community to vent to.

Common microaggressions and how to correct them

Almost no one is innocent when it comes to microaggressions. But as the saying goes, when you know better, you do better. (Thanks, Maya Angelou.) Here are some resources — and a subsequent list — of the most common microaggressions:

Asa rule of thumb, if you are making a comment, giving a “compliment”, or asking a question and realize you’re doing it because someone didn’t meet your perceived expectations of how they should act, sound, look or think like, it’s likely a microaggression, o matter your intention. Instead, say nothing. Or examine why you’ve come to think the way you do, and how to unteach yourself such learnings.

There is no need to comment on someone’s extensive vocabulary — show your support by helping bring their ideas to life. It is unnecessary to comment on a person’s hair and its texture — respect their hair, beauty, and culture by not appropriating it. If you’re curious about someone’s background and where they’re “really” from — try getting to know them as a person first; I bet it’ll come up in time. Oh, and your computer isn’t “acting ghetto” — in fact, I bet someone in IT can confirm that.

As we all become more familiar with microaggressions and catch ourselves in the act, it’s important to hold fellow peers accountable, too. Should you witness a coworker asking an inappropriate question, consider it part of your privilege to correct the behavior, especially if this person comes from a similar group as you. And it’s not about being preachy, just about being helpful. Everyone deserves to earn a paycheck in peace.

As the world continues to change and heal, there are many behaviors, ways of thinking, and words we’ll put to rest. May microaggressions be a burden of the past in time, and carry us a baby step closer to tearing down systematic oppression.