The Real Cost Of Your Aspirational NatureGram 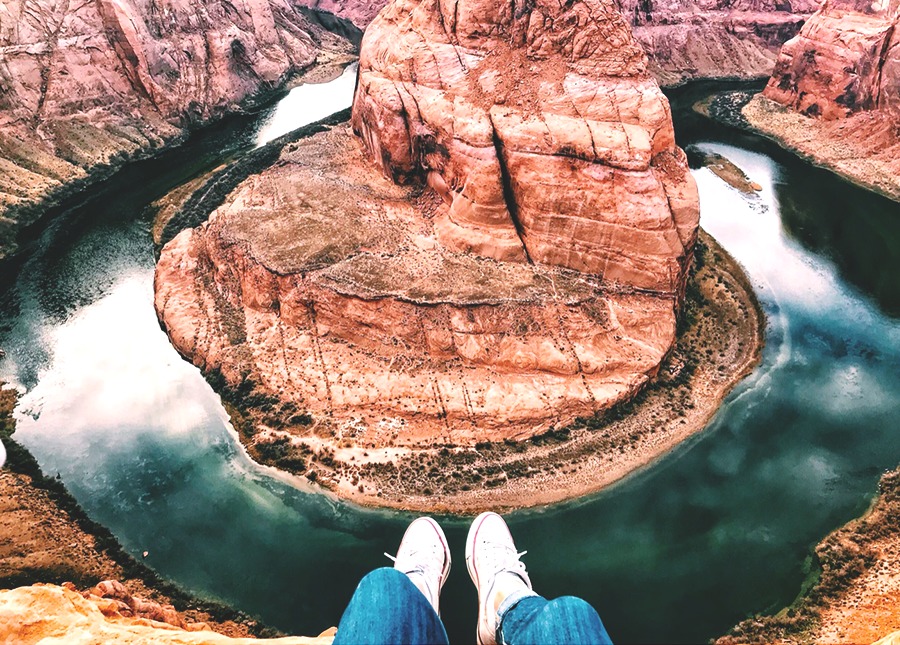 Whether or not you’re down to sleep on the cold ground or not, you probably can’t help but look at the abundance of outdoorsy, carefree lifestyle photos on Instagram and feel that twinge of FOMO. Maybe you even go further down the funnel and wind up in-too-deep with a Pinterest board for the trip you are now planning just to recreate that amazing shot. I get it, because I’ve been there.

I love the outdoors. I’ve seriously priced out living in a van (spoiler: it’s not feasible, given my $200K in student debt). I’ve become at pro planner on how to get to beautiful, peaceful places for as little money as possible. And while I try to keep my phone usage to a minimum on these trips (spoiler 2: turns out, I’m not a great photographer), I’m definitely guilty of finding inspo by searching Instagram geotags to figure out “where next?” I know I’m not alone. Social media has increased foot traffic to outdoor locations in astounding numbers. That’s a good thing, isn’t it?!

Yet, the more I analyzed these beautiful “Instagram Hiker” photos, the more my brain couldn’t stop thinking about the costs. The time, the money, the props, the editing — that’s all one thing. But there’s also a cost we don’t really talk or think about, and that’s the irreversible effect of our nature grams on these sacred places we act like we care about so much.

So, let’s do a mini dive into each of these costs:

You might think, Who would specifically buy a yellow raincoat and go all the way to Iceland to take an Instagram photo? The answer is: A LOT OF PEOPLE. And it’s not just Iceland. There are beautiful photos to be taken all over the world. Hell, there are beautiful photos to be taken in your own state or right outside your city. But don’t forget: being able to travel to beautiful locations to take the perfect photo takes an insane amount of privilege. It takes access to a sturdy car with 4-wheel drive. Or a plane first, then a car. Sometimes it takes boats and helicopters. You need to account for lodging. You need to know how to navigate, which could mean maps, or it could mean special gear and GPS devices. You need to be smart and savvy and informed. You might need permits or passes or chains on your tires or the right traction on your shoes. It’s called “the money shot” for a reason, folks. [Editor’s note: you may also need a passport or visa to get where you’re going — a privilege many of us take for granted.]

Drone laws are one of those things that exist but are rarely followed, and it kind of makes sense if you think about the types of people who are buying expensive drones. And don’t get me wrong — obviously, drones can capture beautiful photography at angles that we couldn’t even fathom getting on foot. But they can also cause terrible destruction to birds and other wildlife, humans, aircraft, and endangered places. Drones are illegal in National Parks, but that doesn’t stop them from being flown and puts these protected places at major risk — all for that fleeting high that comes from our phones blowing up with notifications.

These days camera drones start as low as $50, but per a quick search, it looks as though high-quality camera drones are upwards of $500. The fine for flying a drone on NPS land? $5,000.

First of all, why do these photos exist? This is terrifying! I personally do not want to lure a giant bird to my palm while standing on top of a mountain and balancing my iPhone. But beyond that, don’t we all know not to feed the wildlife by now? Instagram culture has made it (more) acceptable to break rules and take risks we shouldn’t be taking for the art of the Gram.

Cost of bird in photo: free. Cost of feeding the bird: life-threatening.

These hats are cute. I’ve admired them at REI for as low as $45 and on niche online hat shops as high as $255. My boyfriend has one in a shade of green that makes him look like the bearded, beer-belly-liteTM park ranger he is meant to be (and aspires to be, when we get old). But when did these hats get so cute? When we started seeing them modeled on the backs of people’s heads in beautiful landscape photos.

Like Iceland, it’s not just the hats — it’s the brand name puffy coats and those hiking boots with the red laces that are nearly $400. It’s the enamel mugs filled with coffee in your “good morning, world” pic that don’t even keep your coffee hot! It’s the problem with Instagram that TFD has touched on many times before: lifestyle porn “designed specifically to make you feel badly about yourself, like the inadequate, sweatpant-clad loser you are.” I want one of these hats. I want perfectly highlighted, tousled hair that can barely pass for looking like I slept in a tent. But more than I want these artificial things, I want to not want them. I want my love of the outdoors to go back to feeling remote and unmanufactured.

If you live in the US, you probably know where this is. What used to be a local secret is now seeing traction of up to 4,000 people a day or 1.3 million people a year. It’s not hard to understand why. This photo is iconic. This view is amazing. You sit on this overlook and feel like there are still places in the world untouched by man. Then, you pan out. And you see a new trail. You see guard rails that stop you from getting too close. You see trash and pollution. Why does this happen? Geotagging! When we go through the work of getting there, acquiring the props, lacing our boots, and getting the perfect shot, of course we want to share it! Isn’t that why we took the picture?

Considering not tagging your exact location has now become a part of the Leave No Trace initiative, and it’s considered pretty controversial. The truth is, whether we like it or not, our social media activity does more than impact our wallets — it impacts our environment. The outdoors are where we go to feel more connected to ourselves, and disconnect. But, as we see, they are also where we go to look cute and have our picture taken. And that’s fine, but we have to find a balance. Maybe it comes from giving back to the places you love through volunteering and donating. Maybe it comes from buying your equipment secondhand instead of splurging. Maybe it comes from leaving your camera at home. But even if it doesn’t, maybe it’s as simple as respecting the land which has given you so much freedom and so many “likes.”

Kayla is an Austin-based copywriter who can’t properly hold a pencil. She’d almost always rather be camping, but glamping would be great, too.