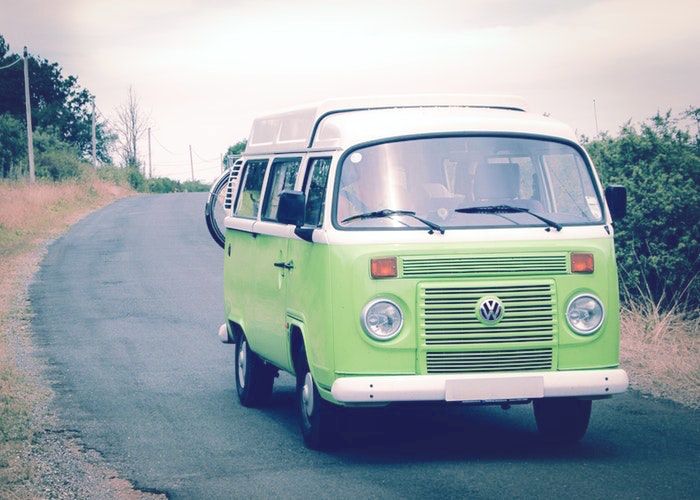 Around this time last year, I had a good job, a nice apartment, friends I loved, and a plan to leave it all behind.

I’d lived in New York for years, and I knew someday I would try living in a different city, but I didn’t want to stick a pin in a map and go for the sake of going. But when one of my best friends and I started dating long-distance, I finally had a reason to move — and it would be to Chicago.

For six months, we discussed long-term plans of which one of us might move. Y’know, romantic relationship banter about cost-of-living ratios and career planning. But during those six months of long, giggling phone calls and shared financial planning resources,  I had the time to really examine my life in New York and decide if I wanted to keep living there.

I started to feel like my work and living situation looked fulfilling to everyone around me, but for me, there was something missing. At the end of the day, I would think, “Everything went well and I did a good job, but…” I rarely saw friends I loved who lived in other boroughs. I would listen to songs, like “How far I’ll Go” from Moana, for a full 30 seconds before I’d start crying. This happened every time the song came on. And Spotify knows me, so it came on a lot.

Everywhere I looked, (at work, at the gym, even when I went out socially,) I saw people who loved what they did and felt like they were on the track. I just didn’t see someone like that in the mirror. So I decided it was time to start saying goodbye to wonderful people, familiar streets, and a few of my favorite things that you can only get in the greatest city in the world. So it was time to make a plan.

I calculated my savings goal

In January 2019, I kicked off Project Relocation with nothing but a spreadsheet and a dream.

Well, a spreadsheet, a dream, a job with good take-home pay, a healthy emergency fund, frugal habits, and several months to line things up.

The first question was a daunting one: How much would all this cost? Since I was leaving the job voluntarily, I wouldn’t be eligible for unemployment benefits, but I was eligible for COBRA health insurance. My emergency fund was standing by with about six months of living expenses ready to go, but I wasn’t about to dip into it unless I had to.  I was already a fairly frugal girl — a way of life for lots of folks in NYC, where housing accounts for a huge portion of your paycheck — but this project meant doubling down on my savings.

After talking with my roommate, we decided I’d move out in July. It was mid-January, so I had six months to plan and execute it all. I put up pretty calendars at my desk tracking the next six months and circled July 14th.

My partner volunteered to fly to NYC and drive all of my worldly possessions back to Illinois. We talked about how much space we would need for my stuff — not much, I’d been on a Marie Kondo kick already. And we decided to rent a large van, one-way.

Then there was an uncomfortable question: How long was I going to be unemployed in Chicago? This is tough to estimate when there are so many factors out of your control. I asked myself two questions: How long, on average, has it taken me to find a job in the past while looking for one full-time? And when, in this plan, will I begin looking for a full-time job?

These questions were great because they helped me plan things more objectively. The answer? It’s usually taken me about three months to find a job, and I would start looking in August. That meant I’d need to cover living expenses for July, August, September, October, and November, plus an extra month or two, just in case. Pro-tip: I started applying to remote roles right away, on the off chance I could begin living and working in Chicago with zero gaps in my resume. If that’s feasible for you, full steam ahead!

The next question was even trickier: How much would my expenses be once I moved? My partner’s family helped with this one since they had an extra room and were happy to host me. I crunched the numbers and came up with a budget for the first few months. My estimated monthly expenses would be about $700. With all those figures in mind, I did what any dreamy-eyed girl would do: Budgetary math:

Since I love erring on the side of caution, I rounded up and called it at $5,000. That gave me the goal I needed. All I had to do next? Start saving.

My “Quit and Relocate” spreadsheet

$5,000 is a lot of money — never let anyone tell you otherwise. But getting clear on the goal was a big step. “I should save up to move someday” is so much more elusive than “I need to save $5,000 before I move to Chicago on July 14.” I love a time-bound challenge. Time-bound challenges have a way of shaking you out of routines and beliefs that can hold you back.

I already made a practice of saving at least $500 every month, so that was a start. In six months, that would have been $3,000 without a lot of extra effort. If I could save another $333 each month, and kept working till July, I would get there just fine.


I got to work and created a spreadsheet to help save for those goals. The spreadsheet accounted for all of my spending, bills, and income from my paycheck and freelance gigs. You can see it here: I’ve kept all the same formulas in this mock-up of the sheet so you can get an idea of what I saw every day when I logged in to check my numbers. I included a monthly savings goal, and right next to it, my total income minus my total spending. Every time I looked at my budget, I was faced with how much I was spending versus saving.

I cut back strategically

I set up rules to stick to as much as possible but resolved not to get discouraged if I faltered. I stopped buying lunch at work, opting to pack it the night before instead. I deleted food delivery apps from my phone. I started selling things I no longer wanted or used. This was a win-win since I didn’t have to pack that stuff.

For breakfast every morning, I made a protein shake instead of buying breakfast. As an added bonus, this helped me think about my goals first thing in the morning. I ordered discounted moving boxes and started packing up at home, focusing on what was most important to take with me. I loved putting the new numbers into my spreadsheet and saving up as much as I could. And after three months, a funny thing happened: I was saving more than I needed to. The spreadsheet was a game I’d set myself up to win — and I was actually winning. I filed my taxes early and sank my whole return into my savings goal. Then I took a step back and ran the numbers again. I calculated it again. I futzed with the formulas. I called my partner. It turned out, if I spent just one more month saving, I could afford to quit sooner. A lot sooner. I could quit a full three months before I had to move.

If I kept working for those three months, that would mean more money, and with the way I was economizing, it would be a lot more money. It’d mean a healthier cushion and a little more security.

But the money I’d saved and my ability to save it had given me a chance to do something totally unexpected. I had the chance to spend three months in a mini-retirement, at the age of 33, in my favorite city in the world. Three months to visit my favorite places, see the Broadway shows I’d been putting off, make time for those friends I loved who lived a long, unpredictable subway ride away. I had three months of getting enough sleep at night, going for walks during the middle of the day, and never once being worried about a work inbox. I also had three months to organize my move, find new homes, and pack up what I’d bring with me. Really, I would have three months to say goodbye.

Buffers helped me deal with bumps in the road

Those extra months were wonderful and afforded me little luxuries like waking up without an alarm each day, going outside whenever I wanted just to take a walk and sightsee at my leisure. I took my time downsizing and packing, which made packing up the van and heading out on that two-day road trip a lot easier.

Of course, there were surprises along the way once we got going. My favorite, I kid you not, was how all the hotels we passed in Ohio were booked for a music & tattoo festival at the Shawshank Redemption prison. Shockingly, I hadn’t accounted for that. But to paraphrase a quote attributed to Winston Churchill: Perfect plans aren’t the point, but thorough planning is essential. We decided to call every hotel we could find within a 30-minute drive, and if they were all full, we’d press on for an hour and try again. Eventually, we found a small local motel that had exactly one room free. By making generous estimates, rounding up my savings goal, and planning for the expected and the unexpected –tattoo festivals included — I didn’t have to be afraid or anxious when we hit a few bumps in the road. We could afford to deal with the setbacks.

Numbers and spreadsheets aren’t here to scare you — they’re here to help. Numbers mean you can stop wondering what your goals should be. They mean you can stop feeling guilty for spending because you know you have a budget that’s working for you. More than anything, numbers show that you’re taking care of your money as best you can and planning for your future.

That’s how a spreadsheet, a modest paycheck, and a dream gave me three months of freedom in NYC, five months to start a new life, and the chance to make the biggest change in my life so far.

My estimate was right on target — I interviewed and got a job offer in October. Now that I have a new career in the nonprofit world that aligns with my passions for writing, service, and community support and I’ve spent a few months in my new apartment, I’m starting to look at that spreadsheet again. I think it’s time for a new, aggressive savings goal. Once you see how effective it can be to come up with a plan for your money, saving becomes a habit — and one that you actually enjoy.

Margaret Mae is a pun-loving project manager who loves knitting, kung fu, D&D, and financial planning with equal fervor. Come say hi on Twitter or Instagram @MargaretMaenad and she’ll tell you why everyone deserves to try the anime hairstyle of their dreams at least once before they die.