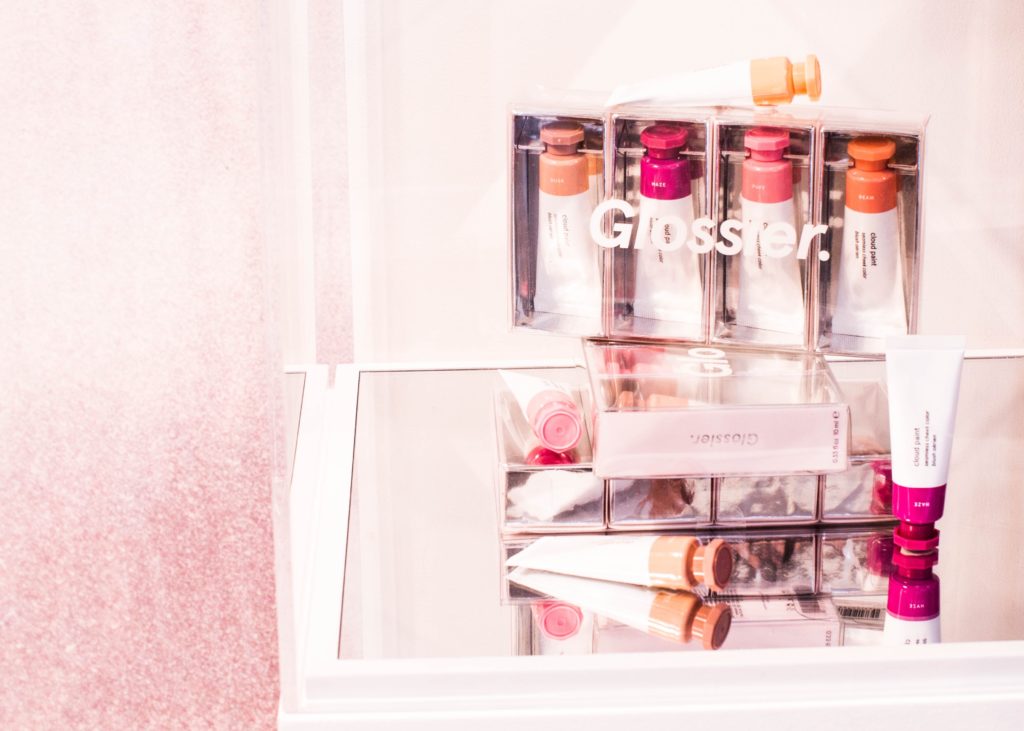 I ran out of primer the other day. That doesn’t happen often, because I almost never wear primer. But I decided I’d better get on replacing it soon enough, because those “I Need Primer”-level special occasions like parties, award ceremonies, and weddings always seem to creep up on me, and I was damned if I’d endure another night self-conscious about foundation dripping down my face.

So I went to the drugstore. And as I perused the aisles, zeroing in on concealers, foundations, powders, pallets, and primers, I noticed a curious amount of products with Instagram-related names. There’s “#InstaReady” BB Cream. “Photo Focus” primer and concealer. “PhotoReady” and “Insta-Filter” foundation. “#NoFilter” setting powder.

Before anyone gets on me for my pretentiousness: yes, I still bought some primer. And a setting powder. But I thought about the names for a long time after, and what they symbolize: the unspoken, unflinching understanding women have with ourselves, our images, and social media. We know that that the perfection we see on Instagram is not real. And yet we still strive for it.

This should probably come as little surprise for most millennial women; those of us who came of age in the early- to mid-aughts were surely inundated with campaigns by Dove, which drew attention to how much retouching goes into modern beauty advertising and media content (never mind that Dove continued to sell products to make our hair thicker, make our cellulite disappear and, in some countries, lighten skin). Dove wasn’t the only brand trying to do this (although as a major CPG advertiser, it had the biggest resources for media spend), and it’s unlikely that any teenage girl walked out of the first decade of the 2000s without knowing that the images we saw on those glossy pages — now on phone screens — were a far cry from reality.

So the awareness campaigns were effective in that regard. But were they effective in actually curbing participation in the system? That likely was never one of Dove’s goals. It takes true marketing talent to effectively convey such a conflicting message: “Tell women they’re beautiful without products, but don’t let it affect how much they spend on them.”

Women are engaging in makeup as much as they ever were before. There’s more creativity in the field and more opportunity to showcase that creativity. But there’s something strangely dark and just a little sad about the way we wink at ourselves with a lot of these purchases. We know that what we see on Instagram couldn’t be achieved without the right combination of high-end beauty products and filters (or, in rare cases, winning the rarest of rare genetic lotteries), but we strive for it anyway. We know that no boy has ever had eyebrows as glamorous or perfectly curved as the bushy-browed IG models we want to emulate, but we still buy a product called “Boy Brow.”

I am not above this by any means. I do it too. I am always looking for the best “blur effect” skin products because I will always have just enough breakouts, scars of former breakouts, burst capillaries, and dry spots for me to be convinced that no one else looks like this (even though everyone else looks like this). I am always longing to give my eyebrows more volume, more depth, more authority, and pretending that I didn’t spend the entire pre-high school summer of 2003 waxing and tweezing my once-bushy eyebrows into pencil-thing nothings. I apply lip balm obsessively in the hopes that the lines in my lips — fucking lines — will simply smooth over.

We know Insta-beauty is an overly-dewy, high-exposure lie, so why are we so attached to it? It applies to the way we see other women, too. Now, when I look at a woman with perfectly illuminated cheekbones atop masterfully shaded hollows, my first thought, while still one of admiration, is not, “Wow, she has beautiful bone structure,” but rather, “Wow, I wish I could be that good at contouring.” When I see a woman whose eyebrows are thick, dark, striking, and have all the right curves, instead of thinking of what beautiful features she has, I sigh in awe at how amazingly she does her eyebrows.

In a way, that’s probably a good thing — we’re complimenting women for things that they’ve done, things that they can help, things they’ve worked on, rather than the things they were simply born with. But it still feels strange at this point in time to be in awe of all the ways someone can manipulate their own face to look like something they’re not. I’m not talking about Hollywood Effects-level makeup artistry, but rather someone who is able to invest the time and concentration and accumulate all the talent in the world to learn how to make themselves look “better” than they are.

It’s one of the most admirable talents I can think of, one that most people will never get paid for. And I think it makes me sad that the talent exists. And what part do I play? I may be complimenting a woman on her skills with a makeup brush, but I’m ultimately still just focused on how a woman looks. She knew how to buy the right things and use them the right way. But she’s so much more.

And finally, where do we go from here? I’ve never been satisfied with the outlook of “this is bad, but at least if we’re self-aware, it will be less bad.” We already know that we’re buying into a lie, and we seem to be okay with it. But I can’t pretend we put ourselves in this situation. As women, we’ve been handed a harsh and cruel deck: cake it on, or risk potentially not advancing in your career, your personal life, your social circle. It shouldn’t be up to us to break that self-fulfilling prophecy, but it looks like we might have to.

Contrary to whatever Prince EA poem you’ve listened to lately, the world’s problems and collective personal issues can’t simply be solved by taking fewer selfies. But perhaps it starts with the decision we make in the morning to wear a little less makeup (or not wear any at all), to not stress so much about covering that zit that no one else notices anyway, to decide that our eyebrows are fine, thin and light as they are. Maybe it’s in letting go of the need to share our picture-perfect visage with the world. Maybe it’s in stopping ourselves from telling our best friend how much we love her highlighter and instead just ask her a question and find out something new. I don’t necessarily know where to start, but I know I want to.