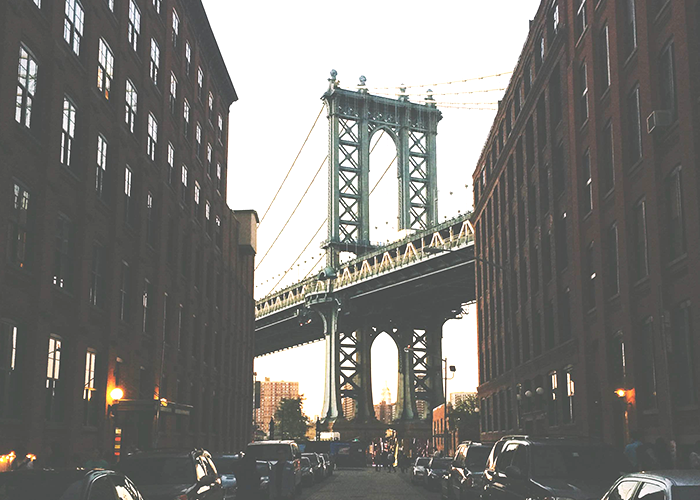 It’s been three years that I’ve lived in New York, and I’ve never one day felt like this is my home. I’ve always known it was a temporary thing for me, a place I came to for work and am staying in for work (for now), because there is no better place in the world to be for what I do. It has helped immensely that three of five members of the TFD team happen to all live in the same neighborhood, and our days in the office together have helped me feel rooted in a way that I hadn’t before. I also like our apartment, and our life, a thousand times better here in Manhattan than I did in Brooklyn. Williamsburg was never for me, nor was a railroad one-bedroom fourth-floor walkup that cost $2,500 a month. I know that New York is as “home” for me as it will probably ever be, and while I don’t expect to ever truly love the city, I can like it for now.

But I’m also not a huge romantic about that sort of thing, in the sense that I don’t feel like you have to be over the moon about a city to have a good reason for living in it. I think people make compromises all the time about where they live, for temporary or longer-term constraints, and I think you can make the best of a place without being obsessed with it. But when you have a place as romanticized and hyped as New York, you feel like you either need to be magically, theatrically in love with it, or utterly hate it and feel like it’s destroying you. I don’t have either feeling, and while I don’t feel like the city is bringing out the best in me, per se, I also recognize that it’s allowing me to do a lot of great things that might not have been possible elsewhere. A lot of business opportunities have been a direct result of this city, and I feel lucky to have most of the TFD team so close and connected. That’s more than enough for me, for now.

All of that said, I’ve found myself more frustrated than not with New York, and have trouble enjoying even the more objectively picturesque parts of it, because of some seriously ugly truths that I felt inadequately prepared for before I moved here. I’ve mentioned before that Paris — where I lived for several years before coming here — is about half the price of New York in terms of the real estate/rental market. When I lived there, I thought it was the most expensive city I could think of, and walking through the more posh arrondissements was the most exposed I’d ever been to capital-W Wealth. I didn’t understand, of course, that the rent on an expansive Haussmannian two-bedroom in the Sixth (one of the most old money-chic areas) wouldn’t get you a studio with a shower in the kitchen in most of Lower Manhattan. I thought I knew what rich was: I knew nothing.

And the fact that so much of New York is so exhaustively, disgustingly rich has made even the most enjoyable parts of it hard to fully appreciate. So little of the city is protected for the working and middle classes — most of it feels like an inexorable march to endless glass condominiums starting at $10,000/month — that even what is good feels like a sand timer that’s already been flipped. When I walk around the City College campus next to our apartment (perhaps the city’s last relic of elite, truly populist education: one of the most diverse schools in the country, with one of the highest percentages of students graduating debt-free), I feel happy and full of hope. I’m surrounded by eager, hungry, brilliant students of every background, reaching for something greater that in some ways feels uniquely possible through the city. But then I remember that the neighborhood it’s in — our neighborhood — is one of the most rapidly-gentrifying in the city, and though Harlem has more historic protections and salary caps than most to protect its middle class, it’s only a matter of time before it becomes another West Village. (I admit that neighborhoods like SoHo or the West Village I’m completely incapable of enjoying — who wants to take a cheerful stroll through an enclave where only literal millionaires can afford to have children?)

Marc and I earn a combined income that should make us beyond comfortable in any reasonable city, but in New York, it can feel difficult to save anything. Our rent is creeping ever-closer to $3,000/month in a neighborhood considered “extremely affordable” by Manhattan standards. There is no sign that even the most vigorously-protected housing will remain that way, when even sites as historic as Langston Hughes’ house is only preserved for the community through the grace of crowdfunding and some serious press. To create any kind of “diverse” community, socioeconomically, in New York, is nearly impossible, and the constant pushing towards extremes in the city is driven in large part by perhaps the ugliest truth of all: you’re not fighting fair in New York. Even if you earn a great salary, or have a substantial household income, New York is full of people who bring with them enormous wealth, and the fact that you live among them on a daily basis will perpetually (and to the point of insanity) skew your perception of “normal.”

You see, it’s nearly impossible to be a professional of any kind in New York (or even live here, really) without having at least a few people in your social circle whose family is helping them with rent, with living cost, with buying property — with everything. Much of New York’s affordable housing (to buy and to rent) comes with salary caps, but not wealth caps, meaning that you can land that rent-controlled unit in NoLita or buy a budget studio in Williamsburg if you are earning very little as a 20-something, because your parents are giving you the down payment. On paper, you read as struggling, but in practice, you’re being used as a conduit to an excellent investment for family wealth. And sometimes, stories like this bubble to the surface unintentionally and become a short-lived source of ire on sites like Gothamist, but it happens all day, every day.

And even if the salary caps aren’t being used, simply having someone invisible who signs on the dotted line or drops a magic number in your account every month makes living in New York suddenly a Carrie Bradshaw dream instead of the financially-devastating slog it can so often be. It’s the NYU student who magically never has to leave her beautiful East Village walkup during her unpaid internship; it’s the young couple who can afford an apartment $1,500 above their salary limits; it’s the colleague who earns the same exact wage as you but goes out three times as much. These New Yorkers are all around us, in our work and our social groups and on our social media, living out a version of the city that seems so impossibly, frustratingly unattainable, and never divulging the source of their abundance. This city — its prestigious schools, internships, industries, arts — attracts the cream of the Northeastern or Californian suburbs, the prep schools scattered around the country, the roman numeral-ed last names from other major cities. They come here and, by their 20s, have managed to anonymize their wealth and background and pass themselves off as “just like you.”

New York City is full of people who are nothing “like you.” Yes, it is also full of strivers and first-generation everything and people from middle-class backgrounds to whom the rents are something we never imagined in our wildest dreams. But it’s also full of vision-distorting wealth, casual conversation drops of summers spent abroad at 12 years old and prestigious arts camps somewhere upstate with scions of Hollywood and New York finance. This city is moving inexorably towards wealth because more of it will always continue to pour in unannounced, and unlike many equally-romanticized European cities, we will never put the kind of social programs in place that do something to even the playing field, and ensure there will always be a thriving middle class, a place for teachers and policemen and janitors to live comfortably. New York is going to be The Capitol because the people who can afford it to be will always come here, drawn like moths to a faux-vintage Edison bulb.

And that’s, in many ways, why I’ll probably never feel at home here. I have no degree, hold no prestigious names on my résumé or family tree, attended a community college and moved abroad through being a full-time nanny. At my core, I will never be able to fluidly move through a city studded with Gatsbys, never fully speak the language, never want for New Money or Old Money or any kind of capital-anything. I feel most at home when I’m eating a sandwich on the City College campus, surrounded by possibility and normalcy and true meritocracy, which can only exist when well-subsidized by a goverment that decides it should be. I will never love strolling around much of this city, because it will always be dominated by impossible wealth and faux-relatability, and that to me will always be ugly — no matter how photogenic it is.