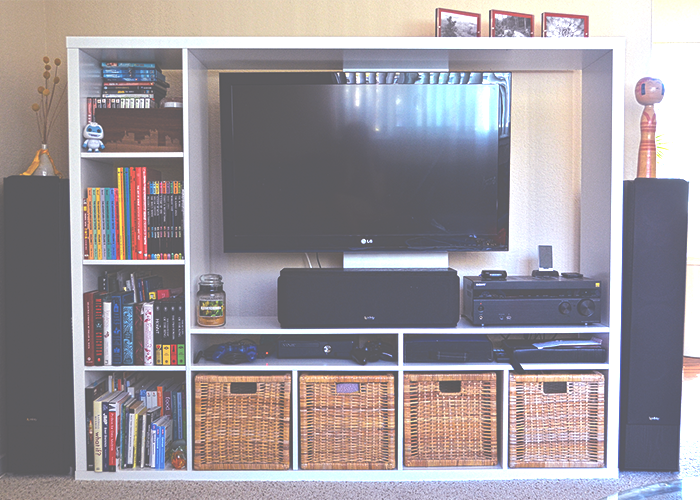 Lately, I’ve been experimenting with 30 day challenges. I stopped eating out for 30 days, and back in the early days of my blogging career, I challenged myself to have 30 no spend days. And I really, truly believe that 30 day challenges can help you make quick, lasting changes to your life. At the very least, they shake up the norm and make you try a few new things.

Recently, I attempted going without TV for an entire month. Prior to this challenge, I made a guide that set out my plan to cut out television, Netflix, Hulu, HBO Go, etc. I was championed and cheered by a lot of folks in my online life, while many in my offline circle were dubious. Perhaps they’re the ones who know firsthand how much I really, really love watching television.

The real question is… Was I able to do it? The first thing I learned was that I wasn’t able to do it completely, as planned (though I still cut down plenty!).

When held up against some of the other challenges I’ve done, this one will live on the “failures” shelf, and there are many reasons for this, the main one being that I spent a large majority of September and October sick in bed. It was as if by declaring to the world that I wasn’t going to watch the TV for 30 days, I encouraged the universe to send me various ailments to truly test my will.

What I was able to do, rather successfully, was significantly decrease my television time (and subsequently all screen times in general). I estimate before the challenge I was spending about three to four hours per day, on average, in front of the tube (I’ve noticed that since I’ve started working from home, my television consumption has increased). After the challenge, I probably log about an hour a day, and some days I go the whole 24 hours without touching the TV. For me, going an entire day without television was unheard of until I attempted this challenge. While not a “win” necessarily, I consider the outcome real progress on an aspect of my life I was looking to change. Here’s what I learned from trying to not watch television for 30 days:

Not watching television made me more productive.

I feared my love affair with TV was getting in between me and my business, and I admit that the need to be more productive during the day was the #1 reason I took on the challenge in the first place. And this is where the “all or nothing” approach of the 30 day challenge really comes into play — once you take something away and truly deprive yourself, you have to find other ways to fill your time. Prior to the challenge, I made a list of 13 things I wanted to do instead of watching television: cooking more, reading more, playing with my dog, staying on top of my laundry. I completed everything on that list.

And with my business, spending less time in front of the TV allowed me to focus on getting work done and courting new clients. I’m on track to have my first five-figure earnings month this November and I couldn’t be more excited. This is due in large part to ground work I laid in October, when I spent my time building my business instead of watching “Scream Queens.”

And that’s when I realized that it’s a vicious cycle: you’re never going to feel productive and empowered sitting in front of the television. Basically, you have to show up.

Not watching TV helped my wallet and waistline.

In an effort to entertain myself sans TV, I started listening to audio books and podcasts. I did this in my spare time, but I also started incorporating them on my daily walks with my dog. Instead of walking for 20 minutes, I’d get so caught up in listening that I’d walk for 45 minutes or an hour. Having an extra hour or two in the evenings (time normally spent in front of the television) also meant I cooked more, which helped me lose four pounds in the month of October.

And, oddly enough, my personal spending in October was way down compared to every other month of 2015 so far. It could’ve been that I was so busy with the extra work load and that I didn’t have time to shop or go out much, but my spending was significantly less. I can’t personally correlate watching television with spending less money since it’s just one month, but it’s definitely a good sign.

Not watching television forced me to confront issues.

Television is designed to be a big, glittery distraction. In the past, I mainly used the tube to decompress after a long day, but perhaps more subconsciously the television helped me forget (for an hour or two) about whatever was stressing me out. In turning off the television I had to deal with issues head on and in real time. No distractions. No “I’ll get to it after I watch xyz.” The biggest thing this challenge taught me is that I was using the television to soothe myself. Instead I had to find other ways to relax like taking a bath, journaling, and practicing meditation.

Sometimes I was annoyed I couldn’t watch TV. But looking back on it, having the extra time allowed me to purposefully think through stressful situations and brainstorm solutions rather than just watching TV until my eyelids felt heavy.

I’ve been indulging in guilt free TV with a few new constructs. On my blog, I had a reader comment that he limits his TV time to just one day of the week, and I loved this idea! I’m currently limiting my TV time to just Saturday and Sundays and reserving the weekdays for work and other tasks. This puts a big time cramp in my style since I love nothing more than getting up in the mornings, making coffee, and watching Hulu until I feel like my brain can string together more than one sentence, but I’m going to try journaling or an early AM yoga class instead.

As a solopreneur, my days can often feel like they bleed into one another, and since I no longer have the typical Monday blues or Friday excitement, reserving television makes the weekends feel a bit more special again.

So if you’re considering limiting your television intake, I say, give it a try. At the very least it’s an eye-opening exploration into how you spend your time and what fills your days. I like filling the corners of my life with my own stories and experiences, rather than the ones of my favorite TV show characters. So go on, try it. The television will always be there.