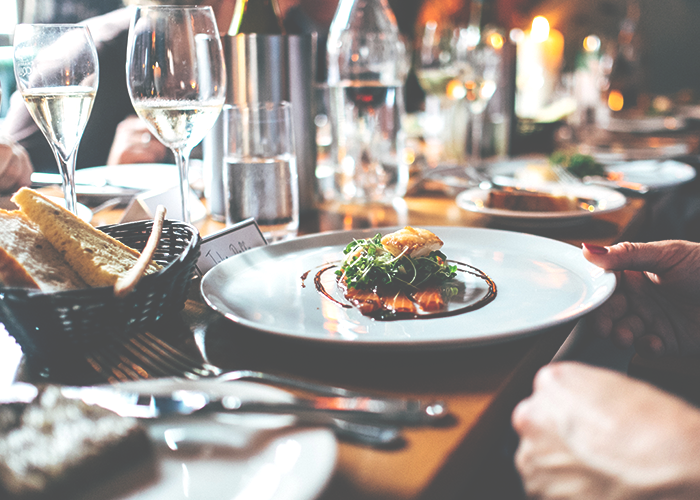 “You can’t not invite them,” a friend told me, months ago, about a dinner I was organizing.

The couple in question was one I’ve known for a while, a wonderful and smart pair whom I loved seeing in most contexts — cheap bars, friends’ houses, park benches — but who were firmly on my “no-fly list” when it came to organizing dinners in “good” restaurants. They are the type to become visibly unnerved when appetizers are ordered for the table, or squabble over who drank exactly how much when the check comes. If the cost of the dinner is too steep for their tastes, the rest of the night will be a wash as they make comments about how expensive the meal was while sipping their one drink. It’s an unpleasantness that I’ve found is better to avoid altogether, and I know generally that they are as pleased as I am to not be invited to events at higher price points, as it spares them the awkwardness of saying “no” or the agony of the shared check. But for events when it would be utterly rude not to invite friends — birthdays, special parties, etc — there is simply no getting around it. Either the organizer has to choose a place with dishes at the $10 price point, or we all have to brace ourselves for the awkwardness.

This is all true, if harsh, and everyone is aware of it when it’s happening, but it’s never spoken about. It’s never acknowledged, because that would be unbearably rude, and make you seem like a judgmental, bougie asshole.

Because the truth is that, no matter how you want to package it, I have more money than they do, and it is just not a concern for me in the way it is for them to count every dollar at dinner, or make sure I’m not paying for two dollars’ worth of someone else’s wine. My not having to care about that, or being able to offer someone a round of drinks for no reason, is undeniably a privilege — and one that leads to some inherent discomfort when we are all in a position together to spend money. And while I can definitely understand what it feels like to be on this side of the equation, that doesn’t mean I haven’t been on the other, or that I am somehow the most well-off person in my extended social circle. I’m not worried about money in the way many 20-somethings are, sure, but I still fall on a bell curve.

And I have been friends with people who were capital-R Rich, when I barely cracked $2,000 a month in take-home pay. I have stayed in their beautiful vacation homes and gone to restaurants I couldn’t afford with them and cringed when the champagne they ordered showed up on the bill we are splitting. I have friends today who live in nearly-$4,000-per-month apartments, who are subsidized in rent and in general lifestyle by their parents, who might spend a whole week eating at “real” restaurants for dinner because they don’t feel like cooking. I don’t live this life by any means, and with all of these people, I have to know what limits to set up-front so that I don’t end up being in the hole for $200 for a random Friday night out, kicking myself for an entire week after because I could have put that money elsewhere.

Part of this, of course, is working in a creative field, which means that a) no one knows how much you make, or has any real estimate, and b) you are, socially, a bit less constrained to a label in people’s mind. People make assumptions about teachers or doctors or bartenders that they don’t about someone who writes on the internet. It’s vague, and has enough social malleability that you are able to socialize easily with people who have a net worth in the seven figures, just as much as you can with someone who is still a dead-broke grad student.

But this phenomenon exists for everyone, particularly in the friendships that are formed pre-career and pre-people-being-defined-by-what-they-have. The friends you may have made before people could see the size of your apartment or the label on your leather bag can now be separated by canyons of socioeconomic access. And while the friends you might make at work or as an adult in general can be more in your own range, there is no guarantee that everyone you get to know after finishing school is going to be someone you align with perfectly in terms of budgets.

And what no one acknowledges — because it feels incredibly shitty in both directions — is how much these discrepancies in earning can chip away at friendships. When someone is living suspiciously well in proportion to how much their job earns, and you know that money is coming from somewhere, that is hard to put out of mind — particularly when the ease with cash impacts what they expect you to be able to do. When you have friends with whom you cannot be frank about not being able to afford things, or sense that not doing something will be taken as an indictment of the friendship/lack of desire, it can feel impossible to decline. We all have friends with whom we can be totally open about money stuff, but what about those with whom the conversation is nearly impossible? Does that ruin the rest of the friendship?

On the other side, when you earn much more than someone else, do you suddenly shift your social life to fit what they can do? If you are set on a trip for your birthday, do you not invite someone because you know they can’t afford it, or do you invite them and let them squirm either with spending too much or having to decline? And what about paying for people? There are certainly a few treasured friends with whom the offer to pay for certain things won’t be taken as a slap in the face or a condescending offer of pity, but there are many more for whom it would be unthinkable. And if you do pay for, say, a flight somewhere, does that person feel wracked with guilt about owing you something afterwards?

It seems clearer to me every day, particularly in talking about money so much as part of my job, that the problem doesn’t really lie in who earns what. It lies in who is honest about what, and to what degree you feel can be honest yourself. If you have someone who refuses to admit the alternate source of their cushy life, that can become a touchy spot of resentment. If you have a friend who is incapable of saying no to things they can’t afford, but lays on the passive-aggression thick when they spend too much, that can be exhausting. If you cannot have a frank conversation about the kind of things that work for all parties involved when it comes to trips, dinners, or events, someone is always going to be feeling frustrated.

The problem is that, when it comes to these issues, people rarely embrace transparency. And the only thing worse than the inherent tension of class is the inherent tension of someone you know you cannot bring up money with under any circumstances. For me, personally, I’ve gotten to a point in my life where talking about money is no longer taboo in any way, and I have no time for those passive-aggressive, tension-filled interactions. I’ve started saying to people openly, “I’d love for you to come, but heads up, it’s going to be about X per person” so they can flat-out decline. I’ve said, without beating around the bush, that certain friends can’t just order bottles for everyone, because they have a tendency to pick ones that are twice the price of the meal itself. I’ve not-unconsciously distanced myself from people who are so far out of my income range that I have ended up feeling like a child or a burden on my trips with them. When it’s come to celebrations like birthdays, I’ve gone from doing dinners or parties out in pricey places with big groups to smaller trips or one-on-one things that I know will fit the price range of the people I’m going with. I’ve tailored my social life so that I can avoid this awkwardness wherever possible.

But more importantly, I’ve gotten over the idea that we shouldn’t talk about this, even though no one does. I’m not interested in living my entire adult life with these tensions, or watching my friend group fade and change out of unspoken necessity, because we are growing further and further apart in terms of class. Unless these things are addressed head-on, that inevitability would happen to me. And unless I get used to the idea of straight-up offering to pay for certain things for people, or saying “no, I can’t afford that right now” to others, they won’t get addressed. It’s more important to me to see the people I love and make it a priority to break barriers of income than to sidestep the discomfort of acknowledging that we can’t split everything 50/50.

If these things are important to you, too, I suggest you have these conversations in your own life, and acknowledge where wedges are beginning to grow naturally. Don’t be in the position of dreading inviting certain people, or not feeling comfortable enough to extend certain offers. Don’t feel obligated to say yes to things, only to cringe at the check. Be honest, and demand honesty from your friends. Because money only comes between friends when we allow it to be bigger than we are, and money shouldn’t be bigger than anyone.