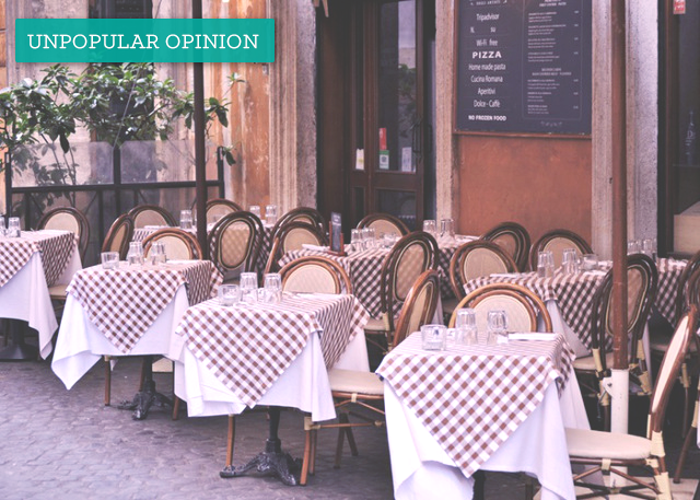 “What’s your credit score?” No, that’s not a joke. I seriously ask guys that when they express an interest in seriously dating me. The answer to that question determines whether I’d want to pursue anything further. A guy’s fiscal responsibility, or lack thereof, may affect my future. Of course, I am realistic and I know a high credit score is not the most important end-all be-all of a relationship. It does not determine whether that man will be a good husband and father. It does not determine how he will treat me when things get difficult. Figuring out those things are definitely important, but they are learned over time. On the other hand, learning his stance on finance is something I prefer to understand sooner. It doesn’t mean I would ever reject a man based on his credit, but I do think it can (sometimes) have an impact on our compatibility.

I’m not into casual dating. For me, if there’s no future, there’s no point. If I want to “hang out,” I have friends for that. I can “Netflix and chill” with a snack by myself. With that being said, I am going to ask tough questions of anyone that tries to come into my life for the long haul. I worked too hard just to have it all tank for a temporary situation. Money is not the most important aspect of a relationship, but for me, it is in the top three. I feel that if a man is not serious about his financial future then he won’t be serious about anything else important. If he’s read any of my posts on TFD (an easy way to gain brownie points), he should know I take personal finance very seriously.

I don’t actually expect a guy to give me his credit score. Would I like to hear it? Do I hope he’ll answer? Yes, but I don’t actually expect him to give it to me when we haven’t know each other for very long. The real question here is, “Does he know his credit score and is he actively maintaining and/or improving it?” If he doesn’t know what it is, then we have a bigger problem, just because it’s important to have a frame of reference for how your credit is doing. Asking this question also gives me an idea of his transparency and how open he is to talking about “taboo” topics. If he’s hard to communicate with, then that could be a problem down the road.

This is not a matter of income levels and tax brackets. I don’t care how much he makes as long as he can take care of himself, and he’s not asking me for money. But it does matter to me if he is living within or below his means. If his budget is maxed out, yet he’s still trying to wine and dine, I’m not going to be comfortable going out with him. If he doesn’t have a budget or any way to manage his finances, I won’t see him as responsible.

I’ve started dating a guy who wanted to wine and dine, only to later have the truth come out. He was very anxious because he couldn’t maintain the relationship he had started, financially. He started asking me for money, or to drive my car, or if he could move in with me. The answer was no. I can’t be the solution for someone else’s finances. If I were in a committed relationship, and we shared the same goals, and then something happened financially to my partner, I would of course be happy to step up. But when we start dating, that’s not my responsibility. I don’t want someone to stay with me because I’m a dependable meal ticket. Anyway, the guy and I broke up, and he did just fine on his own.

Of course, dating does not have to be an expensive affair. There are plenty of cheap and enjoyable dates to be had. My concern is that if someone I’m dating is in a dire financial position as a result of bad decisions, that could lead to a snowball effect of bad decisions if we were to get involved. I’ve read about people’s scores dropping dramatically once they have married their significant others. I’ve also know people who have gotten married, and later found out that their spouse had a lot of student loan debt they never mentioned.

Most marriage counseling sessions include a financial portion where each person has to show his or her credit report. There’s a reason for this, as there is even research that suggests credit scores may reflect financial compatibility more than any other money factor in a relationship. This doesn’t mean that people who have financial disparities or a lot of debt can’t make it work. They absolutely can. It just means that  honesty and transparency are the values that build honest relationships, and I don’t want financial secrets kept in a relationship I get into. Unfortunately, hidden accounts, bad credit scores that people weren’t honest about, and debt that people deliberately choose not to mention are all recipes for disaster. I have worked incredibly hard to bring my credit up, and I want to be sure that if I get serious and consider marriage with someone, I won’t have their credit bring mine down. It would not mean I wouldn’t pursue the relationship, but I would want to work out their credit issue openly and honestly.

I want a man that is independent and self-sufficient. As I progress in my career, I keep getting the “sugar mama” requests, and it’s disheartening to say the least. It makes me trust that person so much less, and I don’t want to be in a relationship where I feel like I can’t depend on the other person. In my eyes, his test run is a single-person household. If he can’t manage that, why would I want to increase his responsibility? How can I trust him to manage our finances, if he can’t manage his own?

To circle back to the first date question I always ask, I will say that some guys have actually told me their scores. Others did not know their scores, and some balked at my audacity. For those with poor scores, I asked if they had a plan to raise their scores. Some did and some didn’t. I’ve even had guys ask me to help them with a budget, and I was willing, as long as they were willing to put in the effort too. I don’t immediately write men off for bad credit, I’m only concerned if someone doesn’t want to take responsibility for their actions, or improve their financial state. When I’ve met people who told me on the first date that they had good credit scores, that didn’t make them better people, but it was a way of showing that their financial values align with mine, even though it isn’t the only litmus test to find financial compatibility. When I’m dating, I’m searching for someone who is trustworthy, who shares my goals, and who I genuinely feel connected to. I would never write someone off for their mistakes, because we’ve all made them. What matters is how we recover from them, and I want to be with someone who wants to maintain or better their finances.