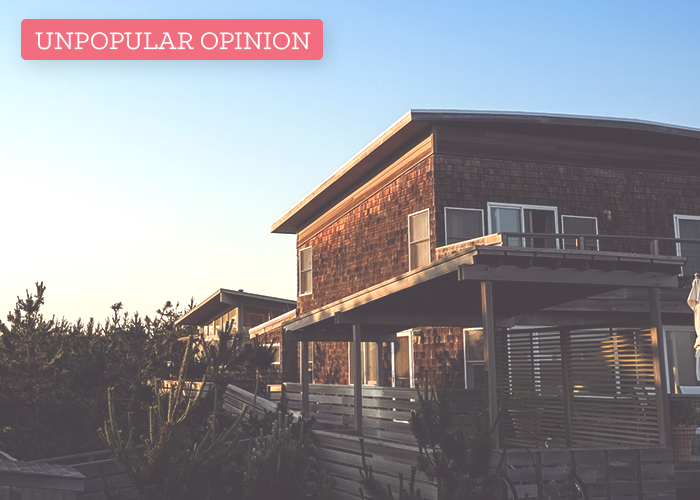 If you read any article on paying down student loans fast, one of the tips you’re bound to encounter is the idea of moving back home after graduating college. It was the piece of advice I heard over and over as I tried to figure out how to pay down my student loans faster, and build up my savings while on a modest entry-level wage. I was resistant to the idea for several reasons. Like many fresh-faced college graduates, I dreamed of having a cool apartment I could call my own. I wanted the freedom that came with my own place and finally feeling like an adult. In the back of my mind, I felt certain that I would be moving out of my home state of Texas and to a new place to start my career.

For the longest time, moving back home wasn’t an option for me anyway. My parents were divorced, so my dad lived in one city, and my mom lived in another. My dad was about to get married and live with his new wife, so moving in with them was out of the question. My mother, who I had a tense relationship with, lived in a smaller town without much job opportunity, so moving in with her didn’t seem like a strong option either.

I graduated college with $21,000 in student loans and no job lined up. Promptly setting out on finding a job, I got a few leads in places across the country, thinking for sure I was going to relocate to a new state for a job. Through the trials and tribulations of job-hunting, all of the leads ended up falling through, and I found myself back in Texas.

I felt defeated moving in to my mom and her husband’s house in a town outside of Houston, Texas. Despite the burning feeling of defeat, I told myself that what I was doing was the “right choice” since everyone recommended doing it, and it would allow for my student loans to be paid off faster.

I got a job in Houston and started making the 40-minute to an hour commute every morning to get to work. For a short while, things seemed to be going okay. Without rent and utilities to pay, I was able to put a good chunk of my paycheck toward student loans every month.

After the short feeling of contentment vanished, restlessness and depression set in. I started to realize living at home hadn’t been the best decision after all. While being able to pay extra on my debt was nice, several problems started to become evident.

Not being in close proximity to your friends anymore is one of those unfortunate things that’s bound to happen when you graduate college. What I didn’t expect when moving back home was the effect of being around no one I could connect with. Living in a smaller town, most of the people I encountered were a lot older. Traffic congestion made driving to the big city of Houston a time-consuming task. Not being around like-minded people, I didn’t feel as challenged and motivated anymore.

Working 50-60 hours a week at my full-time job meant I lived for the weekends. Every weekend, I tried to get out and do something. My mom didn’t share this view. There was this underlying assumption from her that I would help out around the house every weekend. She would get angry and talk down to me whenever I spent a weekend not helping out around the house. I felt less independent, and it meant I was working all the time, whether it was at my full-time job or doing things around the house on weekends. My social life became non-existent, and I felt stunted and unable to do anything.

A big part of life after college is trying out different jobs, being around like-minded people, and testing things out. Living in a smaller town, away from a bigger city, I didn’t get to experience things as much as I would have liked. The small town I was in wasn’t the place for me to grow my career. Networking events didn’t exist, jobs weren’t nearly as plentiful, and I wasn’t around other people who were starting out their careers. The people I was surrounded by — older and more established adults — often made comments about me needing to “settle down” and buy a house, which wasn’t what I needed to hear.

I knew moving back home would mean I’d have to give up some things: less independence, less privacy, and my dating life (who wants to bring a person back to their parent’s house?). What I didn’t expect was to be treated like a child. Seemingly every weekend I had free, my mom expected me to help her out with something. Usually, it was moving furniture, driving her somewhere, picking things up, or fixing something. Having the opportunity of living rent-free, I was fine with doing errands for mother, of course. However, every weekend, I was expected to help out with something and if I didn’t, I would be scolded at for being lazy or ungrateful. Everything I did was monitored and cast with a judgmental eye.

Living rent-free and being able to save more money was good, but the negatives ended up outweighing the positives. Because my mom always had a list of things for me to do, I never got enough time to pursue my various side hustles further. I lived in a small town and missed out a lot of networking events and things that could have helped me.

Once I moved out and to a new city, things changed quickly. I had more time to devote to my side hustles, opportunities started to pop up, and overall, I became more proactive toward my goals.

Looking back I realize just how bad living at home had been. I was stifled, limited, and without independence. Of course, I am grateful for the time my mom allowed me to stay, and I understand that she wanted me to pitch in in return. But I look back on the time and wonder if the aspect of saving money was even worth it considering all the limitations that had been placed around me.

Colin is a communications professional currently teaching English in Thailand. He is on Instagram.