What I Learned About Myself From My Complicated Interracial Friendships 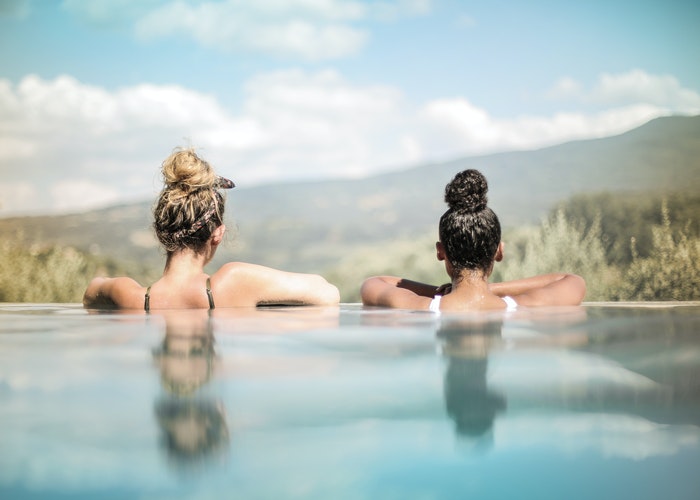 *Names in this story have been changed.

On a warm spring morning after my childhood friend Kim’s* sleepover, her mother asked if anybody wanted to lay out. When I asked why we would lay out in the hot sun, Kim’s mother explained their family commonly relaxes in the sun to get some color and read. Although I did not need the color they were seeking, I was an impressionable first grader. I did not need much convincing to participate —  I just wanted to keep the fun going. Kim and all the other girls ran over to get their sunscreen, but I was told I did not need any. As an adult, I know that Kim’s mom was implying that my melanin would act as a coat of armor, protecting me from the sun’s sting. The myth that Black people could not get sunburn plagued me. The whole experience was confusing.

I watched perplexed as the party-goers covered themselves in thick white cream. I mimicked the girls as they wiggled their weight into the lawn chairs, to then lift their shirts allowing the sun to evenly shine on their pale bellies. Once I lifted my pajama shirt, I found my familiar brown skin. The sun brought to light what I paid no mind to for the entire night: Everyone else at this party was white.

I decided to sit in the shade, then I went inside to call my parents to come get me. Deep down, I did not feel included.

In retrospect, I am pleased to say my discomfort got the best of me, thus keeping my first experience with sunburn at bay for two decades. I told my friend’s mom that I did not like how the sun felt against my tender brown skin. I also thought laying out was boring, but I did not tell her that. I was given the option to continue to lay out or sit in the shade. With slight hesitation, I decided to sit in the shade, then I went inside to call my parents to come get me. Deep down I did not feel included in that portion of the party.

When Friends Invalidate Your Experiences With Racism

It became glaringly obvious she was no friend to me or my community.

I never talked to Kim about the sleepover because we were in the first grade. At the time our similarities were more important. As we got older, we were able to process race and its complexities. Now when we have conversations about race, it does not always come easily, but we both understand why it is necessary. In Robin DiAngelo’s book, White Fragility, she notes that many people of color have told her they have tried to talk with white friends about racism, but their white friends either invalidated their experience or got defensive.

A personal example of invalidation came when Nancy* could not see a problem with her party guest chanting, “white power.” I thought I heard her incorrectly, but she went on to say, “if I would have known, I would have joined in on the chanting.” At that party in the backwoods of Pennsylvania, I was the only Black person. I feared that I could be the strange fruit hanging from a northern tree by the end of that social gathering. It also became glaringly obvious she was no friend to me or my community.

In recent protests, the notion that silence is complicity was used to rally people who were not speaking out for the Black people unjustly killed by police. As society faces the long-term commitment to dismantling institutional racism, I chose to take a reflexive approach by asking myself, how have I been complicit? Remaining friends with people who are racist was my form of complicity. There is no perfect anti-racist, but I needed to draw the line. I realized a handful of my friendships were sporadically harmed by racially insensitive incidents. These “friends”  told racist jokes, confessed their prejudicial beliefs to me, or sometimes, straight-up discrimination against me. These incidents directed our friendship to a place where I spent most of my time educating about social injustices rather than engaging in what used to be a healthy friendship. It is not my responsibility to continually educate people about issues that disproportionately affect people who look like me.

For the sake of my own mental health, I decided I cannot be a part of their anti-racist journey.

Being the Black friend can sometimes be lonely and frustrating. Just as clearly as I can remember the good times with Nancy, the experience we shared at her backyard party stuck with me, too. I could not understand how she did not connect their chanting to the history of white supremacy within the country. Her blind spot was a gaping hole that our numerous conversations about race could not fix. I cared for her, but I care about myself more. I refused to open myself up to attend one of her parties again. My boyfriend reminded me of a Madea quote that said some people enter your life for a season or for a lifetime. I have a problem placing lifetime expectations on seasonal people. When I do finally decide whether to end a friendship, that decision does not come easily. Ultimately, I am deciding whether I want to protect myself or a friendship that is no longer serving me.

When I start to realize that I am having a different form of the same conversation, I know that it’s time to end the friendship. Ending a friendship is the right decision when the relationship has become toxic. And it was obvious that these “friends” were not doing the work on their own. They expected to get their dose of cultural awareness from me. At the end of the day, I needed to accept that their personal beliefs about the Black community conflicted with mine. No matter the outcome of the conversation, they always continued to do the same thing we initially discussed. My patience with people like this has become nonexistent. For the friendships that did have to end, there were no hard feelings. For the sake of my own mental health, I decided I cannot be a part of their anti-racist journey. This does not mean that the friendship amounted to nothing. They will forever have a space reserved in my memory.

I appreciate that she’s willing to have conversations about race with me. Now, she is even willing to share her sunscreen with me.

The optimist in me still believes there is a way to develop and truly maintain cross-racial friendships. I do not believe there is a key to successful cross-racial relationships. Everyone’s relationship is unique, and it deserves to be treated as such. What makes Kim and my friendship successful may not be the answer to every friendship.  I appreciate that she’s willing to have conversations about race with me. Now, she is even willing to share her sunscreen with me. As I have gotten older, I have learned to build relationships based on a foundation of respect for cultural differences. It is unrealistic to expect my friends to get it right all the time. But when my feelings are consistently disregarded, I know it’s time to leave.

Tara Nicole is a budding writer and activist. A random fact about her is that she misses eating pizza with cheese, but she thinks pizza tastes just fine without it. Check out her instagram.