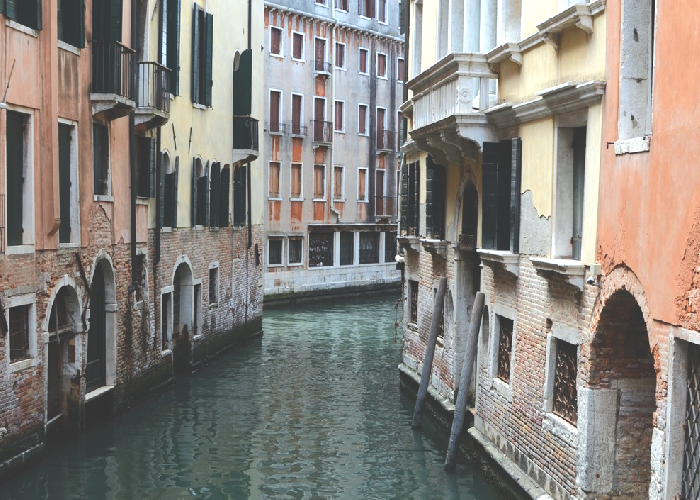 In 2013, I was waiting for my life to begin. My job wasn’t quite as fulfilling as it had initially been. The commute was torture and I got home so late that I didn’t have the energy for any of my side work. Half of my weekends were spent working, and cut heavily into my friends and family time. I passed up a lot of freelance opportunities, lost interest in my hobbies, and became seriously out of shape. I grew frustrated at my existence in general, yet felt helpless to do anything about it.

That was until a couple of friends and I decided to take a trip to Italy the following summer. We called it our “Eurotrip,” and even though I was the only one who wasn’t borrowing from the parents to fund our trip, we still were able to keep it budget-friendly. We decided to spend three weeks traveling through Italy, and then visit my sister and see Pearl Jam in Amsterdam at the end of our trip.

Suddenly, my life had meaning! I started consuming nomadic travel bloggers. I lapped up post after post on how to ditch it all and travel the globe. I devoted myself to lifehacks that would help me undo the leash that tethered me to my desk job. A simple trip with my friends had metamorphosed into something bigger. It was a gateway. It was the key for my new and better life. It was, I imagined, the true start of my life.

The trip bombed big time. Neither of my friends were able to go, in the end. So, I had to rehash most of the trip details, and ended up leaving by myself, for Amsterdam, at the beginning of the summer. After spending eight months planning my transformative trip to Italy, it ended up falling apart before it started. But, determined to salvage the remains, I found a way (and had the savings) to make my own Eurotrip. I spent the summer marveling at the beauty of the Netherlands and Belgium, while being annoyed at my friends’ complete inability to get their shit together. It was still fortunate that I had the financial means (that I’d worked very hard for) to go on my first solo trip, but it wasn’t what I expected, and that definitely brought me down. Here is what I learned along the way:

Travel isn’t an ultra spiritual experience where each moment is one life-changing revelation chased by another. I thought travel would make my life different. That I would take my place amongst the fairy folk that exist in Instagram feeds and aesthetically-pleasing Tumblr posts. I assumed, and I wanted, travel to magically make me into a different person with a resumé of fascinating experiences and a portfolio of interesting friends. I was convinced when I returned home, I would be transformed.

While some quiet introspection on the road can definitely help with self-improvement, the traveler is still the same person they were when they left home. In fact, some problems can be exacerbated by the loneliness of solo travel or by simply shoving them aside for a week in Ibiza. Your anxieties will get on that plane and come along with you. Not only did my trip leave me feeling vaguely unsatisfied, but when I arrived home, I had to add my depleted bank balance to my list of frustrations.

2. You are your own backup plan.

I spent the first week of my trip fuming on my sister’s couch in Amsterdam. One of my friend’s parents withdrew their support for her trip at the last minute and the other got her visa rejected days before our planned flight. I had funded my own share, but was unable to afford any of our plans on my own. I felt angry and betrayed that so much of my energy was spent on nothing. But, obviously, I needed to get over myself. I was in one of the most beautiful cities in the world with two months of unplanned vacation! I did feel lonely at many points and, though I met a lot of great people and learned so much, I didn’t meet anyone I’m still in contact with beyond casually clicking “like” on their Facebook posts or pictures.

However, I did realize I could survive solo travel. I learned that it’s okay to feel lonely, and tried to appreciate that a new city will always offer some distraction. I found great pizza places, hole-in-the-wall secondhand bookstores and made some great sketches. I rediscovered my passion for drawing. I had heart-to-heart talks at 3 AM with girls I’ll never meet again. I got to bug my sister after being apart for four years. Though I did get lonely at points, my resentment of my friends dissipated. My trip is over, but I still have them as friends.

3. There is no point (during travel or life) when your life magically “starts.”

I spent years after university wondering when the life I wanted would start. When would I be cool and be financially independent? Looking back, I have realized that each day I showed up at work, I did something important in a tiny way. My job was an important stepping stone in my career. I am proud that I didn’t have to depend on my parents to fund my trip. Though no miraculous “event” occurred to start my life, it happened in little increments. All that showing up to work and saving my pennies made my trip possible. It wasn’t the pivotal moment I thought it would be, but I made the best of it.

I didn’t feel like a white-clad yogi after my trip. I wasn’t the living embodiment of some Pinterest-worthy spirituality. I came back from my trip feeling as if I didn’t accomplish as much as I should have. However, taking a break did help me realize that I was unhappy with my job. And when I returned,I actually did something about it, instead of continuing to remain unhappy. I quit, and joined a bigger firm with more opportunity for vertical growth. I started eating better, exercising and made a concentrated effort to make my social life meaningful. But these positive changes weren’t a result of a “magical” travel experience, they happened because I took control, and did something about my situation. Most importantly, I learned that I’m not in competition with anyone, least of all with overly engineered, filtered travel pictures.

Amena is an architect and social media ghost. You will not find her on Instagram or Twitter.