Why We Believe Diamonds Are Forever 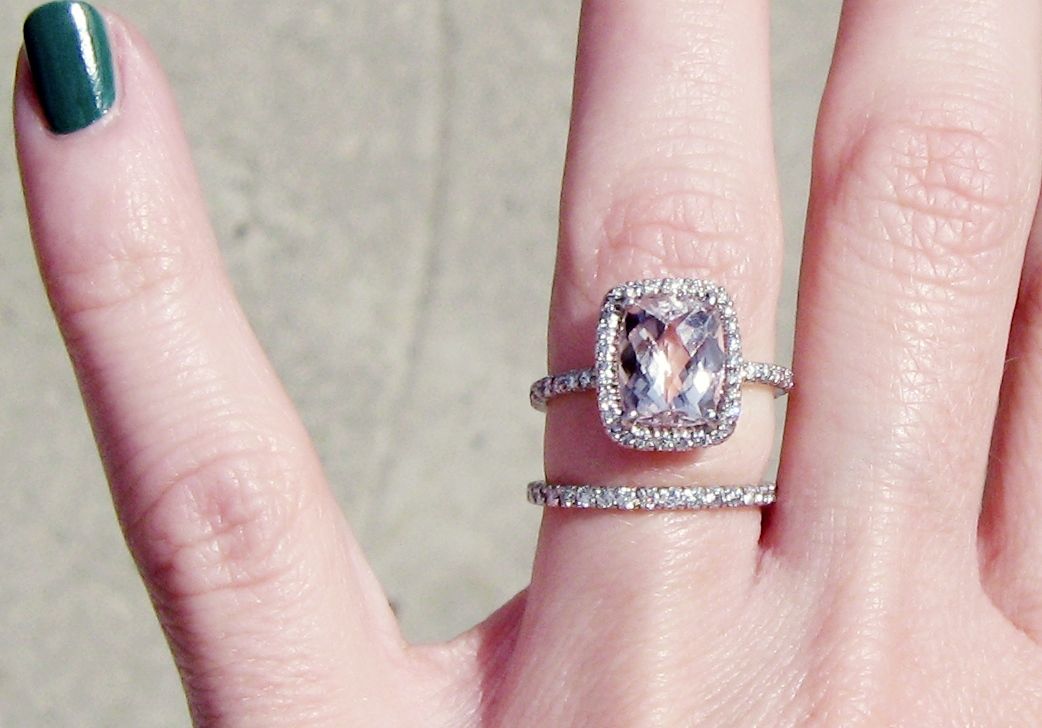 There are many conventional parts of marriage that, were I to be getting married, I wouldn’t go along with. For example, I think it’d be bizarre for my Indian mother and grandmother to see me parade down an aisle in a white dress and a veil. I have nothing against it, it’s just honestly not my culture, and I’m not enthused about the religious implications that come with the veil. Weddings have always been humble in my family— when my step-mother and father got married, it was a small, intimate ceremony, and my step-mother would’ve sooner died than been a flashy bride.

However, I have to admit, I like the tradition of wedding bands and engagement rings. I think engagement rings are beautiful, and symbolic, and I sure as hell prefer the engagement ritual to the Indian dowry situation. I wouldn’t want it to be a huge expense. I wouldn’t want to base it off my husband’s income, because as we’d likely be merging finances, I’d probably rather just have an open conversation about what we could afford. And at the end of the day, I’d prefer to put more money toward the down payment on a house, rather than have a larger carat size. But nonetheless, I am not opposed to the engagement ring culture, as long as we’re thinking critically about it, and spending wisely (on a conflict-free, fairly made product).

So, in the name of critical thinking, I wanted to dissect where the allure of the diamond engagement ring comes from. I found a Wall Street Journal video about how much someone should spend on an engagement ring, and they brought up an interesting point: Many of us assume we need an engagement ring to signify we’re getting married because we’re deadset on following the tradition that has, seemingly, always been in place. The video compares the engagement ring phenomenon to Mother’s Day— on the one hand, you know it’s a Hallmark holiday, but on the other hand, you don’t want to be the person who writes off Mother’s Day just because it’s made up by advertisers.

The culture of engagement revolves around the ring, and we think of it (or, at least, I think of it) as a beautiful tradition that has been experienced for generations. Except for one thing: It doesn’t date back generations. According to the WSJ video, diamond engagement rings only became popular starting at the beginning of the 20th century. In 1947, there was a major diamond campaign that sparked the revolution of the diamond engagement ring, and perpetuated the engagement culture we’re now familiar with.

According to The New York Times, the campaign, for DeBeers, was pioneered primarily by two women. Frances Gerety wrote the line, “A Diamond Is Forever,” in 1947. She was setting an example for females in the boy’s club of advertising, and was, in my mind, the real-life version of Peggy Olson. (The article says Peggy would’ve been eight-years-old when Gerety wrote that campaign for the DeBeers.)

Here’s one of the De Beers “A Diamond Is Forever” Commercials. It aired in 1999, which means, at that point, they’d been using Gerety’s line for 52 years.

“Neither Ms. Gerety nor Ms. Dignam ever married. But their greatest professional achievement arguably was helping to create a sense of emotional attachment to the diamond engagement ring.

It’s hard to imagine a time when diamond engagement rings were not the norm; today, even after a decade and a half of bad press about blood diamonds and working conditions in the mines, among other concerns, 75 percent of brides in the United States wear one, according to Kenneth Gassman, president of the Jewelry Industry Research Institute.”

The fact is, in the early 1900s, diamond engagement rings were considered a complete waste of money. In the 40s, we were still coming out of the depression, so it follows that there was major hesitance around spending on extravagances like diamond rings. But the ad agency (N.W. Ayer) had one main goal, and that was to make an engagement ring a requirement to the ordeal of proposing. In a way, engagement culture is one of the most concrete examples on the effect advertising has on our lives. As someone who’s worked in advertising, I can generally discern how something’s being sold to me, and why I’m the right market for them. I honestly love the strategy behind it, but as a consumer, it’s still easy to forget how much time a campaign has spent anticipating what you want to hear. I used to work on an ice cream account, and the strategy team actually had a name, an entire persona, and blog built around the brand’s ideal consumer. (We would refer to her as meetings as if she were a real person.)

But knowing when something is being sold to me doesn’t stop it from working. And I think that’s part of the lesson here. We know Mother’s Day was dreamed up in a conference room, and to a certain extent, the same is true for engagement rings. But the trend catches, and spirals, before we push it away. Rings get passed down, they become family heirlooms, and the seed that the campaign planted becomes a tradition we make our own.