Why You’re Not Getting A Promotion, And How To Actually Get One 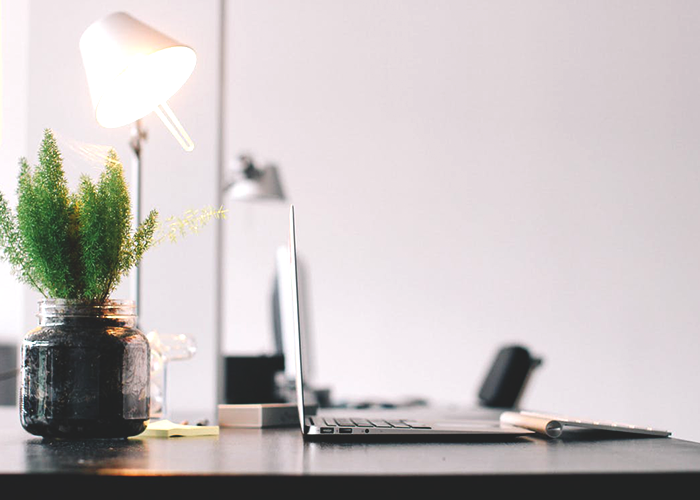 Some people are told there is no Santa Claus. Their dick cousin tells them, as vengeance for a lost game of Monopoly Junior. Or they saw Gremlins.

Others figure it out on their own. I was one of these. It took me eight years of cognitive development to get there. The physical impossibility and the logistical improbability pressed at my young mind, but the biggest question I had was one of motivation.

At eight years old, I had recently begun to understand money. I’d come to understand that one Breyer Horse was equal to approximately one thousand years of untouched allowance. I’d also begun my education in the concept of Stranger Danger. I had a newly honed ability to scrutinize adults for their intentions.

And I found myself wondering, “If this old man has such limitless wealth and power, what is his angle in using it to buy presents for children he’ll never meet?”

So I asked my parents, and they confirmed. “Yeah, that’s a thing adults made up to incentivize kids to conform to behavioral expectations,” they said, in so many words.

The thing is, Santa Claus is not an isolated incident. False or greatly exaggerated incentives exist everywhere to compel you to behave yourself. I’d like to talk about one of those false incentives today. The merit-based promotion is a comforting myth that took me thirty years to unravel. Much like with Santa, it was a rude awakening, but I’m much happier knowing the truth.

What reason does a company have to promote anyone?

Let’s consider a hypothetical situation. Mr. Bighead has worked for Conglom-O for six years. He makes $40K per year, with a yearly 2% cost-of-living pay increase. Mr. Bighead is highly educated. He is a hard worker, and widely looked to as a leader by his peers. He’s known to work late nights and weekends, and is deeply dedicated to fulfilling his role to the highest standards. Mr. Bighead thinks he’s poised for a raise any day now.

He’s not going to get one. Why?

Let’s apply my eight-year-old Santa-busting logic to this situation. You have to ask yourself what Conglom-O’s motivation is. Why should Conglom-O give Mr. Bighead a promotion?

You may be tempted to frame this question from an employee-centric perspective. “Because he’s earned it. He’s a hard worker, he gets results, he’s a natural leader, he’s put in the time, and he has great potential.” Assuming all of those things are true, a corporation has even less incentive to promote. Because here is the same idea, framed in the cold robotic voice of Conglom-O.

“This person has worked for us for six years, making $40K. Our budget for that role was originally $52K, so we’ve saved $72,000 so far by using him. Despite being cheap, he’s also done spectacular work. He fulfills the duties of a manager without actually being paid to do so. He works nights and weekends in exchange for a bare minimum of perks and recognition. Our HR department’s pay structure is such that managers make a minimum of $75K, so we would have to almost double his pay to get him into that level. So why on earth would we move him from his current role, where he is performing so optimally?”

You do not live in a meritocracy

I think it’s easy for young people to get trapped into a meritocratic way of thinking because schools are meritocratic.

You work hard, you get good grades, you move on to the next grade level. Rinse and repeat. The best singer gets the lead role in the spring musical. The best athletes are on the varsity team. The brightest and hardest-working students get the best grades. These expectations were so firm that any deviation would cause a school-wide stir. (That time the band teacher’s son got selected to be drum major? FIFTEEN MONTHS OF DRAMA!)

It’s little wonder that Millennials are so often accused of having an obsession with “fairness.” We expected it to be one of the governing principals of the world, and it ain’t to be found nowhere.

Your workplace will work hard to promote the image of a meritocracy. It flatters the people who control such messaging (the leadership, who did get promoted at some point) and acts as a dangling carrot to inspire sacrifice and hard work among individual contributors. Don’t fall for it.

Your parents used the mythos of the North Pole would inspire you to be your best self year-round. Companies use the promise of future promotion to do the exact same thing.

So what do you do if you want a promotion?

There are other ways to get promoted that aren’t easy or wise to try to harness. For example, I know a handful of people who were promoted to their current role because they were the only person chosen to survive a team-wide layoff. I also know people who shadowed someone of retirement age, and pounced when the role became vacant.

Do not do these things. It’s so unwise. Too much can go wrong. It’s true that some wildebeests successfully cross the river by charging wildly right past the crocodiles, but that doesn’t make it a good strategy.

In my career thus far, I’ve witnessed only two successful techniques for getting promoted that don’t rely on luck or circumstance. 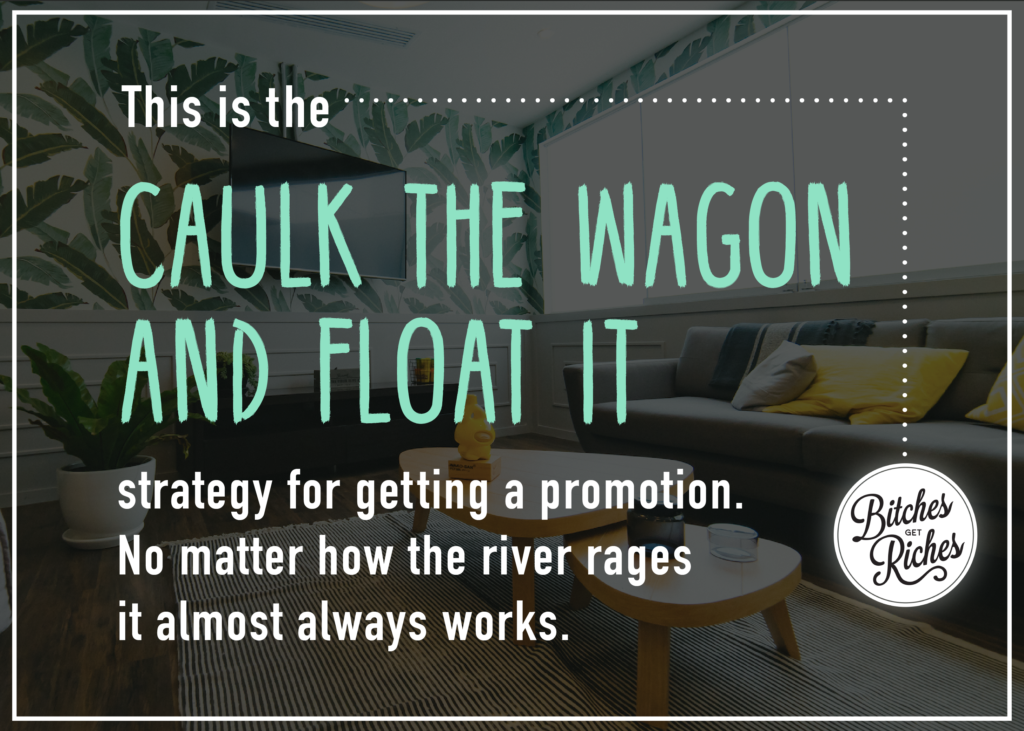 This is the “caulk the wagon and float it” strategy for getting a promotion. No matter how the river rages, it almost always works.

Our grandparents and parents were far more likely to stay in the same job for ten, twenty, or more years. Even now, workers aged 55-64 stay in one job for an average length of over ten years. Workers aged 25-34 average only three years.

There are a ton of reasons for this, but one of them is that those older workers are more likely to be at the job level they want to be. Young people who want to advance their careers are getting smart to the idea that moving up sometimes means moving on. Learn from your peers, and do as they do.

Additionally, it’s hard to change your perception within a company. A current coworker of mine is highly-educated, thorough, whip-smart, and extremely strategically oriented. She’s hanging around in a role she doesn’t like because she’s holding out hope for a promotion. It won’t come. The reason? She started at the company as a high school intern. And that’s how they’ll always see her. She now has her MBA, but it’s given her no luck in redefining expectations among her coworkers and leadership. In my opinion, she needs to move on immediately and start over in a workplace where she’s viewed as a serious young professional.

You always have the option to return if you leave on good terms. Any transition point can act as a springboard, even if you’re springing backwards.

2. Align your promotion to business interests

This is the “attempt to ford the river” strategy. It only works in very specific conditions. You need a cool head and ovaries of steel to attempt it.

Let’s go back to our earlier hypothetical. Conglom-O doesn’t want to promote Mr. Bighead because promoting him doesn’t align with their business goals. They like saving $12K per year on such a cheap, overachieving employee. They don’t care about such fuzzy things as “deserving it.”

Mr. Bighead has a much better shot of getting what he wants if he spots a way he can save the company even more money in a higher role. Let’s say his current duty is to put the bottle caps on all the bottles. If Conglom-O is currently paying $3M per year to buy the bottle caps from an outside vendor, and Mr. Bighead proposes a plan to do the same thing in-house for only $500K per year, he has a much higher likelihood of piquing upper management’s interest.

Saving $12K per year is cool, but saving $2.5M per year is a lot cooler. The company won’t mind giving Mr. Bighead his raise if the net is still a huge improvement to their bottom line.

Frame your request for a promotion as part of a larger business strategy, and make sure that strategy falls in line with the vision your leadership already has. Express this as a time-sensitive business need that you are eager to fulfill. Pitch it in such a way that your boss recognizes it as a huge potential win for them. And make sure you attach a dollar amount to it, if at all possible. Improving processes and quality and morale is all well and good, but remember that you’re talking to a business. Your ideas will carry more weight if they can be expressed using dollar signs.