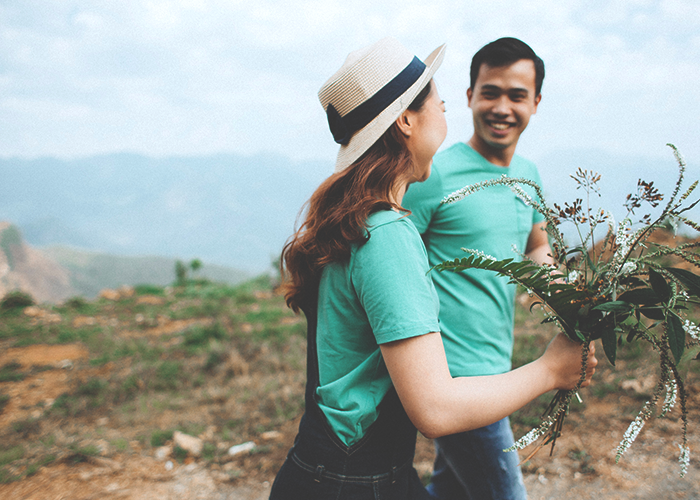 Several years ago, my wife Andrea and I were that couple. The pair who drove fancy cars, parked inside the garage of a nice house in a great neighborhood in Phoenix, and always looked like they had it together. Between our two careers — Andrea is a television news anchor, and I’m a firefighter — we made more than $100,000 a year. From the outside looking in, we were well off.

But it was a facade. The truth is that we had a negative net-worth, lived paycheck to paycheck and had zero in savings.

It all came to a head in February 2011, when I got a phone call from my wife that I’ll never forget. She was checking out at the grocery store with our 10-month-old and a line of people behind her when her credit card was declined. In fact, all our cards were maxed out, and we didn’t have any cash. It was a Wednesday and payday wasn’t until Friday. Andrea had no other choice but to leave the grocery store empty-handed.

We were broke, embarrassed and confused as to how this happened to us — but determined to find out. So we sat down at our kitchen table and looked at the last three months’ worth of bank statements and learned we’d spent a lot of money…on a lot of crap.

Between dining out and entertainment, we spent about $800 a month being the fun couple who always said “yes.” No matter the party, dinner or event, you could count on the Peaches to be there, and maybe even pick up the group check. We also spent an average of $1,700 on shopping trips. Target, Kohl’s, Lowe’s — we didn’t discriminate. It wasn’t uncommon for Andrea to drop $300 on a dress, or for me to spend a few hundred on a power tool from Home Depot. We liked stuff and told ourselves we deserved it.

At the time, we only had our son — though we eventually welcomed a daughter — which meant we bought diapers, formula and baby food for him each month for about $100. However, our monthly grocery bill averaged $1,200. Yep, we spent that much to eat at home, in addition to the $800 at restaurants and for other fun.

It didn’t stop there. We were frequent fliers of the $20 withdrawal program at the drive-through ATM — to the tune of $240 a month. Our cable bill was $220. Together, our car payments, at $1,210, added up to a few dollars more than our mortgage. And finally, we spent a whopping $650 a month on minimum payments to Visa and MasterCard.

Those are just the highlights, of course, but reviewing these charges opened our eyes to why we were so broke — and how we’d managed to rack up $52,000 of debt in just three years of marriage.

In the coming months, as we started learning more about money, we realized the consequences of our spending habits and debt were even worse than we thought, because we were neglecting other important things like retirement savings — I was compelled to invest 11 percent of each paycheck toward my pension, but Andrea wasn’t investing enough to get her full 401(k) company match — life insurance and college planning.

Facing these realities, Andrea and I made the decision to never live like this again, and promised each other we wouldn’t.

That’s how the “Promise Project” was born. We both knew we needed to make some serious changes to the way we handled money — to start behaving like responsible adults. So we wrote up a goals contract — detailing where we were then, and where we wanted to be — signed it, and hung it in our medicine cabinet. Every day, it was a reminder of our why. We knew the next couple months wouldn’t be easy, and there’d be days we’d want to quit. There’d be less sleep, less fun, and more work. But it’d be worth it.

The first thing we did was create a 15-month plan to get out of debt and back on solid ground. That meant we needed to create a real budget, earn more, and cut back. We also switched to an all-cash diet, which ultimately saved us $500 a month, solely because we actually felt the weight of each purchase, rather than absent-mindedly swiping a credit card.

We wanted a small amount of financial security to get started, so we made a goal of saving  $1,000. Luckily, we had so much stuff in our house that we just threw a few items on eBay and reached our goal in less than a week. Looking back, it almost seems silly how easy it was, but it was meaningful to us. It was our first real win!

In addition to picking up overtime shifts at work, I also found a side gig. Remembering the success I’d had on my pool cleaning route in college, I looked up every pool in my neighborhood and rehearsed my pitch. About one out of every 10 neighbors would say yes, and I earned an average of about $1,000 a month.

For her part, Andrea continued selling the contents of her closet on eBay — popular designer dresses, sunglasses, handbags and shoes. This started out as a painful exercise, but once she realized it was only stuff — and she could potentially replace it later — it was a no brainer. Altogether, these resales eventually generated about $4,000 we could throw at debt.

From there, we focused on cutting back our wants. We bought an HD antenna

for free local channels and canceled our cable bill, which brought the monthly bill down from $220 to $60 for Internet only. We used to say that as soon as we became debt-free, we’d buy cable again, but it’s been five years, and we still haven’t. I guess we didn’t need it in the first place.

While we were at it, we stopped going out to eat. This was tough because, as self-proclaimed foodies, we loved dining all over town at the latest and greatest spots. But we realized that a small break from the restaurant world wouldn’t kill us, and we actually enjoyed $10 date nights at home: Redbox rental, $3 bottle of wine, and grilled chicken. We also canceled vacations, remembering the promises we’d made to each other. How could we justify going away when our ultimate goal was to pay off debt? Finally, we sold Andrea’s Acura SUV, and bought a slightly-used Kia. The difference in car payments saved us $500 a month.

Seven months later, we were at the finish line. That’s right — we cut our 15-month goal in half. We’d hustled, hustled harder, and never quit.

Our last debt was owed to Bank of America. There was a local branch near our home, so we hopped in the car and paid it off in person. I remember giving the check to the teller and watching her enter it into the computer. She smiled, handed us a slip with our new balance: $0.00 paid in full.

That was the day we first felt free. We haven’t borrowed a single penny since, and never will. Now, we pay cash, save and invest like crazy. In short, we finally have control of our money and our lives.