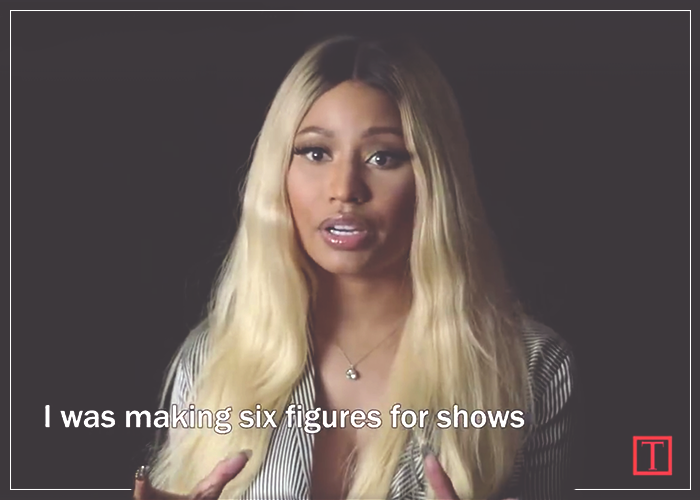 When it comes to powerful female pop stars who are unafraid of being brutally honest, I can think of no one who takes the crown more than Nicki Minaj. She is, to my knowledge, the only female performer today at her level of fame, financial success, and influence, who speaks so candidly about the realities of her life, even when they are unglamorous or risky to discuss, the way she does. Nicki talks openly, for example, about her abortion as a teenager, about her failed relationships, about her abusive and drug-addicted father, about her struggles to assert herself and earn the same as a comparably-successful man in her field. She’s also spoken, most notably in a now-infamous off-the-cuff interview while applying her makeup, about the dismissal and degradation women can face when they dare to asset themselves and demand their worth in a professional environment:

But this particular Nicki moment — no matter how much press it may have gotten, and how much people still remember it — is far from the only time she’s talked about these issues, and used her own personal experience as an example to follow. We may not be negotiating seven-figure contracts and touring the world for millions of fans, but we face the exact same hurdles when it comes to determining and advocating for our worth, and the same potential backlash and judgment when we finally do speak up. It’s easy for us to feel like it’s unseemly to insist on a fair rate, and it’s easy for a male colleague to perceive our refusal to settle for less than we’re worth as somehow vulgar or greedy. When a man is insistent on his worth, he’s confident. When a woman does the same thing… well, you know the drill.

In this short interview clip, Nicki describes her thought process behind asking, from a relatively early stage in her career, for the same things her male counterparts were getting. As obvious as it may seem now, with the incredible success Nicki has experienced, one can only imagine how difficult it was to put herself on the line (and risk being known as a “bitch” in the industry) by not accepting a lower rate early on.

Nearly every woman who has worked in a professional setting can relate to this conflict, and speaking personally, I remember very distinctly being embarrassed of asking for money at the beginning of my writing career. I was writing for several big outlets with huge names and deep pockets, and even then would write multiple pieces for free, because I was afraid it would make me look greedy or “in it for the wrong reasons” if I insisted on getting paid. Looking back, I can obviously see how ridiculous this was, and I haven’t made the same mistakes since in terms of always negotiating and advocating for the right price for my work. But part of my shyness was definitely a result of growing up as a girl and internalizing all that nonsense about how we’re supposed to behave (and not behave). It can take years for women to shake off those initial cobwebs of socialization, and once we do, it can take years to adjust to asserting oneself without feeling guilty about it.

Luckily for us, as always, Nicki has some thoughtful words to help us get there faster.