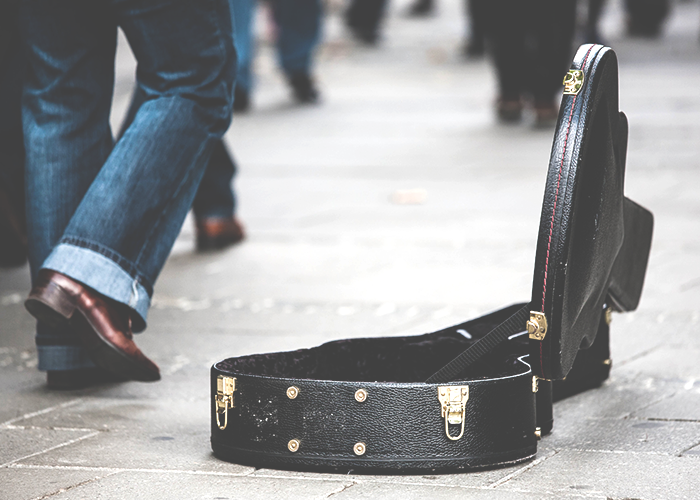 When it comes to making a quick buck, we’ve all probably done some things we wish we hadn’t. It’s easy to weigh decisions in dollar value alone, particularly when we just need the money quickly, and to forget all of the other factors that go into our work: our time, our health, our basic dignity. It’s often not until we’re months or years out of a work situation that we can realize just how toxic it was, or realize how much we justified in the name of cashing a check. And if we sell something to make that same money — well, chances are we might wish we’d waited just a few days more to make that money some other way, rather than getting rid of something we needed or truly loved.

For me, given that I was fired from most of the jobs I had between 16 and 21, I have a lot of regrets in terms of the things I did to make money. I was never good about being honest about what I could really commit to long-term, nor what I was actually good at. It took me about five nanny gigs to realize that I just hate taking care of other people’s children, and several coffee shop firings before I realized that waking up at 4 AM and being bossed around by a 24-year-old manager in a man bun was not my bag. I also agreed to do tons of things that were mostly-illegal and totally immoral, such as doing essays for other people in college. Most of my jobs were fraught with regret, because I never took them seriously, or took the ethical lines they skirted seriously, either.

So in the interest of learning some of the TFD community’s most regrettable money-making schemes, I spoke to readers over the weekend about what their most cringey moment is. Here are some of our favorite answers:

“Working for two days at a greasy diner near my mom’s house where I (wrongly) assumed I’d see no one I knew and make some quick cash before leaving the country. I had to wear a hideous t shirt, I think maybe even a hat of some kind (unsure, I’ve blocked it out). First day was funny, I actually enjoyed it. worked with a couple high schoolers (I was like 23) and one dude older than us who was a Pagan and told me about he and his wife meeting threesome prospects on Craigslist. Second day, a huge snowstorm uncharacterstically hit and we were the only place open for miles around. SO the place gets flooded – i have no idea what I’m doing and am making a huge mess of milkshake machine, etc. Halfway through the day, I look up from the register and see a dude I dated briefly in college and had a huge crush on still, who was just returned from military school, to erase that interaction alone I would give back all $200 I made that day.” – Jessica

“Parted with some of my grandmother’s jewelry. The sentimental value FAR outweighed the tiny bit of cash I got.” – Angie

“The most regrettable thing I ever did for money was spend one of my New Year’s waitressing a job with a catering company at some super-rich woman’s house.The money I made was truly NOT worth the stress and shitty attitudes I was subjected to for nearly eight hours. The job was in an extremely wealthy town, and the party was filled with all these wealthy asshole couples who were all lawyers, plastic surgeons, and wall street investment advisors. For the entire duration of the party I was subjected to snippets of down right a w f u l conversation, vaguely racist comments, and sexist remarks from leering middle-aged men. The woman weren’t eating, could barely keep their hands up with the weight of their globe-sized diamonds, and shot me nasty looks all night. It truly felt like I was in some kind of alternate universe. I vowed I would never ever again subject myself to that kind of situation, and the $200 I made that night will never be enough to erase the crappy feelings/emotion I have from it.” – Jo

“One of my perks at my first career job was a new laptop that retailed for about $1600 — but I desperately needed money to pay off credit card debt, so I immediately sold it and said it got stolen along with my purse. My boss found out a few weeks later, and I was fired, and had to pay that employer the full price of the computer or I would get sued.” – Korrin

“Okay, this was technically for charity, but every now and then I’ll remember it and shudder a little. In my second year of University, our campus bar ran a ‘Men’s night’ and put out a call for hostesses to work the evening and help raise money for charity. I knew it would be possibly morally dubious but being the shameless attention seeker I am, I put myself forward to help. For a good cause, right?

In actual fact the night resulted in a bunch of us girls dressed in corsets, stockings and suspenders and towering heels, being plied with free booze then lined up on the stage before a bunch of leering men, and ‘auctioned off’ for charity. The worst part of it all, we were pitted against each other individually to see who could ‘win’ the highest bid. Some girls had no bids and were actually booed off.

I ended up being ‘bought’ for £200 by the University football team, with the condition that I’d go round to one of their houses and make them a full meal from scratch in my underwear and serve it up to them. I left that night with a dirt on my skin that I couldn’t shake for a while, which reappears every now and again from a certain look in a man’s eye. I never did go round and make them dinner.” – Katie

“I definitely regret the two-month stint I spent as a ‘web editor’ for a pretty well-known women’s publication. My job basically consisted of plagiarizing other stories from the web and rounding up photos of celebrities. I was paid minimum wage and was constantly doing unpaid overtime. I was also once told, indirectly, that I should eat less by my boss.” – Clara

“After graduating from college, living back at home, a high school friend and I decided to sell our underwear on Craigslist. Both of us were trying to find jobs, and we figured it was an easy way to get mad money for movie tickets and lipstick and goofy stuff like that. We set up a burner email (this one, haha) and an elaborate Google spreadsheet to track our sales (via Amazon gift cards), and had “business meetings” at coffeeshops. It was reasonably successful, and I definitely relished being able to afford little luxuries while dealing with my weird limbo-state between school and the ‘real world.’ Things got too real when 1. we ran out of underwear we were willing to give up and 2. one guy emailed me a video of some ducks in a fountain because he thought I would like it. I don’t totally regret it, but it’s absolutely a secret we will both take to our prude-y little graves, and although we met afterwards, I feel a little guilty not telling my S.O..” – Maddie

“When I was in college (in New York City) and really desperate to stay in school even though I couldn’t afford housing, I turned to Craigslist and looked in the shadier sections to find housing situations that would fit my needs and budget (aka basically zero). There was a guy who was looking for a female roommate who would clean and cook for him in exchange for a free queen sized bedroom in Manhattan. This also required that, once per week, you wear a maid’s outfit. I know that looking back this sounds absolutely fucking insane and like a good way to get murdered, but I did it for an entire semester. I got a bolt lock for my room and avoided him like the plague if I wasn’t doing one of my mandatory cooks or cleans, or walking around in my maid outfit. He never physically touched me, but his constant leers and comments were more than enough.” – Jana

“I got prescriptions I didn’t need from my doctors and sold them at really high prices (Xanax, Ambien, Adderall, etc). Using my mom’s excellent government insurance to become a suburban drug dealer basically paid for most of my college expenses. And while I don’t regret what I did with the money, I regret how much I treated it like ‘not a big deal’ just because I was some nerdy white girl in her mom’s house. I was a privileged piece of shit and I should have been arrested.” – Alexis

“I was working as a babysitter, and my roommate’s girlfriend (who was also working as a babysitter) asked me to cover one of her shifts. I showed up to a lavish Upper West Side apartment with the mild warning that the mother of the kid was “quirky,” expecting to spend a few hours playing board games with the kid and putting her to bed while her parents went out for drinks or dinner. Upon arrival…it became clear that I was on an hours-long audition of sorts. The mother stayed in the same room with the both of us for the entire four hours, watching my every move. The child was a nightmare — bratty, manipulative, fussy, impossible to engage in simple playtime activities or feed at dinner — and the mother would occasionally pull out her notebook and TAKE NOTES on what I was doing. As she handed me a couple twenties, she asked me to come back. I smiled, politely referred to prior engagement, and got the fuck OUT. Creepers-town, USA.” – Sam

“During Christmas time in 2013, I had just moved to NYC and was broke and in a new relationship. In need of extra cash, I definitely sat through a grueling seven-hour taping of Beat Bobby Flay which was a gig I got through one of those “paid audiences” set ups. Definitely worth the $60, but wouldn’t do it again. The best/saddest part about it was there was a group of people who were there because they ‘won’ tickets to the taping.” – Kat

Career / Climbing The Ladder 3 Prompts I Use To Decline Working Below My Rate (While Negotiating A Higher One!)