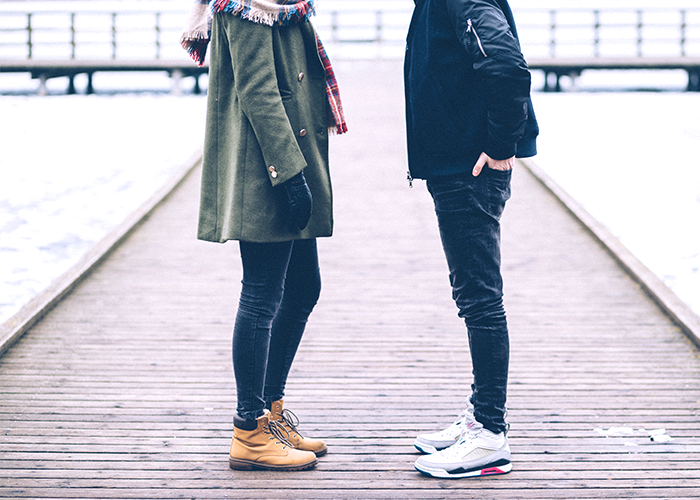 When Taylor Swift sang “Find out what you want, be that girl for a month,” I cringed into another dimension — because I very much used to be that girl. There was a couple-year period where I dated an incredibly disparate cross-section of men and attempted to shoehorn myself into each new aesthetic in order to impress them. Of course, this meant spending a lot of money I really didn’t have on everything from clothes to concerts to online classes on a subject they were interested in (yes, I realize this is humiliating and borderline-sociopathic behavior — it was a weird time). Anyway, the point is, there were a good few purchases I made during that time in the interest of impressing a man that I deeply regret, and feel some serious embarrassment over.

And yes, part of this is ~society’s fault~, as we are often taught as women that it is our job to adapt and fit into what a man is already interested in, but it is up to us, as we mature and become more comfortable with ourselves, to shake ourselves free from these patterns. It is up to us to look at that one time we bought tickets, clothes, and a new tent for a three-day jam band festival when we absolutely hate jam bands, camping, and music festivals (not saying this was me, but also not saying it wasn’t), and feel that raw sense of shame. Not a single dollar should go to impressing some dude (or woman!) on false terms, nor should any relationship be predicated on transforming oneself to fit another’s taste.

So to give us all that extra kick in the pants, I spoke to 11 women about the worst thing they ever spent money on to impress a guy. Here are their answers:

“Before my first date with [now-boyfriend], I bought a push-up bra because I’m bad at dating/being a person, and I thought he would only like me if I had boobies. I haven’t worn it since our first date, and it was like $60 at Victoria’s Secret.” – Caty

“I was really obsessed with this guy in college who felt ‘out of my league,’ which should have been a sign right there, and I kind of decided that I would do any and everything to get his attention. At the time I didn’t have a ton of money to get myself a new wardrobe or do some fancy thing to attract his attention, but I definitely had enough money to go to the Duane Reade and get a box of cheap hair dye, which I used to dye my hair a truly atrocious shade of red, because he had at one point posted a Facebook status about how redheads were ‘God’s gift to the Earth, after beer.’ The fact that I would do that, and the fact that I would do it for a guy who posted Facebook statuses like that, still makes me cringe to this day. Oh, and he still didn’t want to date me.” – Lindsay

“Brooklyn Half-Marathon participation. I mentioned to my boyfriend on our first date that I wanted to be a runner (he mentioned he had done like 2-4 half marathons by this point) and it was a ‘bucket list’ item to run a half marathon (not really, the Disney one would have been cooler). So a month later he held me to it, and I got in (he almost didn’t), and I had to run. I made it to the finish line under 3 hours but I now swear I will never do it again.” – Brittany

“The most embarrassing thing I ever bought to impress a guy would probably be a veggie burger on a date with a guy that regularly ran 7+ miles. I would’ve gone with a regular burger, but I wanted to come across as healthier. I don’t usually find veggie burgers particularly embarrassing, but when you’re at a great burger place and you’re pairing it with a beer… I should’ve spent my money on the real deal. ” – Marissa

“When I was 13, I was not exactly flush with cash, which makes the fact that I spent 40 hard-earned dollars — made from actual manual labor on my family farm — on a terribly-made, red, black, yellow, and green knitted backpack emblazoned with Bob Marley’s face seem extra terrible. BUT the boy I was crushing on at that year’s county fair (who was white, 15, and probably couldn’t point Jamaica out on a map) LOVED Bob Marley. So I loved Bob Marley, and until about two years ago, I had the backpack to prove it.” – Laura

“This guy I dated always commented on my perfume, which was a Nirvana Black sample that I had gotten at Sephora with another purchase. Despite not totally loving that perfume myself, I went ahead and bought a bottle of it just because this guy liked the smell. If only I had saved that money, I could be spritzing myself with Tom Ford Black Orchid.” – Hailey

“I told this guy that I was into surfing… I had never surfed… I literally bought a cheap surfboard that I found on Craigslist to keep up the ruse, which literally just sat in the corner of my living room until he and I broke up about two months later, at which point I gave it away to a friend of a friend who actually enjoyed surfing.” – Olivia

“One of the most embarrassing memories I have of money I’ve spent for a guy was buying two tickets for my friend and I to go to this alt-rock music show (called Bamboozle) that I knew a guy I had a huge crush on was going to be at. (Hey, it was 2006, and the idea of us getting dressed up in our ‘rock show’ all-black best and sneaking a cigarette felt EXTREMELY COOL AND SCANDALOUS.) Anyway, we had to hitch a ride from a friend to the show, we got stuck in a huge amount of traffic on the NJ parkway, and we ended up missing the very set I knew my crush would be at. (Sigh, I’d just have to *pretend* I was there so as to impress him into thinking I was much more badass than I was.) My friend and I ended up sitting on a grassy hill in the parking lot casually waiting for the dude and his friends to come out so we could collectively relive how awesome the show was. That $100 was seriously painful to part with at that age, especially when the guy turned out to be 100% uninterested in me…lel.” – Alex

“This guy I liked in high school mentioned that he liked ‘country girls’ (which I am very much not), so I bought a wife beater because that was as close as I was going to get to being a country girl. Obviously I never wore the wife beater, because it was heinous and I’m not dead inside.” – Ella

“I was in a two-year relationship where I never really felt like I could be myself, and I spent untold amounts of money trying to keep up with his lifestyle. Basically, he was this very traditional, WASPy guy from a ‘good family,’ and I had an extremely humble upbringing with a blue-collar family. I never felt good enough for him, and would constantly buy things like Lacoste polos and tennis skirts and Lilly Pulitzer dresses whenever we’d go to visit his family. I felt like I was essentially playing a character for him, but receiving a compliment from his mother felt like the ultimate validation, as weird as it sounds. I think I was going through this whole class-insecurity thing of being the working-class girl who went to an Ivy League school, and it manifested itself in this extremely wonky relationship. It didn’t end up working out, and I absolutely hate all the clothes I bought for it, but lesson learned. I am who I am.” – Bea

“I went on a date with a guy to a restaurant I couldn’t afford in college (because I wanted to seem fancy and chic), and went to do the wallet fake-out when the check came, and he was like ‘Thank you for treating me!’ and I literally had all three cards declined in the middle of this fancy restaurant, until the guy was finally like ‘Okay’ and paid for it in cash. Never, ever again did I do the wallet fake-out unless I actually have the money to back it up. Those were the most excruciating 10 minutes of my life.” – Phoebe