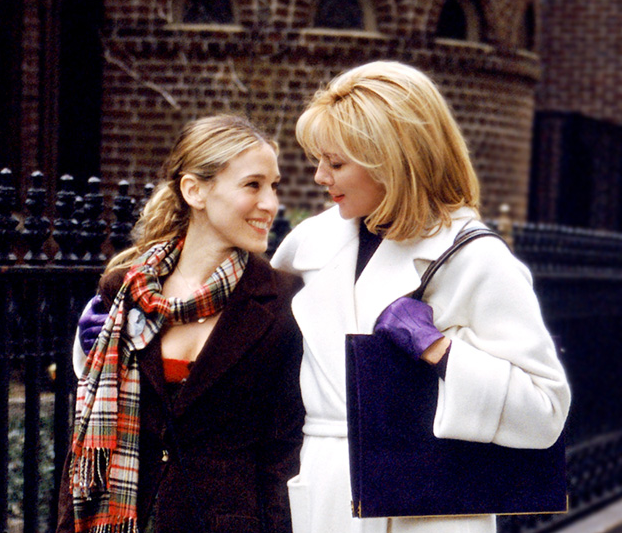 Yesterday, I wrote about the friends we have in our lives who may be holding us back from making the professional or financial progress we’d like. It’s a sucky topic, to be sure, but it’s also an important one to consider: Are the people in our lives making us more happy and productive, or are they making us feel bad for going after what we want? For most of us, the answer is both. And what’s important as we get older and start really setting our sights on what we want out of our young adulthood, is not feeling as though we’re obligated to keep everyone around at all times.

We should be spending more time with the friends who get us, who know why we’re putting in long hours or cutting out certain spending habits. And we should remember that we’re not in high school anymore, and no longer obligated to keep around friends

who no longer support who we want to be. We need the people who are going to lift us up and make getting to the goal line easier. These are people who are motivated, confident, and have their own dreams in life — which does not mean that they aspire to be millionaires or celebrities, simply that they have a clear sense of self which reinforces and encourages your own. We all (hopefully) have friends like this, and these are the things they do for us.

1. They listen, share, and give real feedback when you’re talking about work stuff. It’s not a superficial conversation of “Oh, how is work going?” and “Fine.” It’s a real exchange of ideas where you can be a sounding board for one another and actually make tangible improvements. Whether you work in totally disparate industries, or even the same company, work talk is not mindless gossip with them, but rather serious, productive (and yes, sometimes gossipy) conversation.

2. They have their own goals, which could be anything from ‘a family and a beautiful home with a big kitchen’ to ‘paying off my student loans by 30’ to ‘getting the corner office.’ It doesn’t matter what their dreams are, just that they have them.

3. They are the first person to congratulate you on a piece of really good news, whether via gchat or an insistence that the both of you go out for drinks. Your success is cause for the both of you to celebrate, and vice versa.

4. Because they’re so supportive, they’re always the first person you think to tell about the good news.

5. Both of you feel incredibly comfortable sharing your dreams with one another, even the ones that sound a little unrealistic. Something about talking with them always makes the crazy stuff feel possible, and they’re never snarky about your ambitions.

6. When one of you needs to buckle down and save some money, it’s not an awkward moment of judgment or a drop-off in seeing one another. You help each other be smarter about money, even when that means a month without restaurants and fancy cocktails. You can have just as much fun at home with some cheap wine and dollar slices.

7. They don’t just let you complain endlessly. They want to find practical solutions and actually work toward making you happier and more fulfilled.

8. (But they still let you do some bitching because they know that sometimes, venting is what you really need and having someone be overly-pragmatic all the time is kind of its own bummer.)

9. When you were at your most broke and broke-down, they didn’t judge you. Whether you hit a streak of unemployment or had trouble paying your bills one month, it wasn’t a reason to doubt you as a person or value you any less. While some people might treat someone having a hard professional time like a leper, they were always by your side.

10. They are the person you go to when you’re about to explode at work from stress and fatigue. They’re the person you can gchat at four PM with “margaritas tonight??” and know that you’ll get just the steam-blowing-off session you need.

11. When you’re having to put in overtime at work because you’re really working to finish a project, get a promotion, or even change careers, they never guilt trip you with “Come onnnnn, can’t you go out? You’re no fun anymore.” They get it, and respect it. (And you repay them by taking them out first thing when you’re back to the world of the living.)

12. If you need company for an all-nighter or a crazy working weekend, they’re there to make sure you eat and don’t pass out. (They’ll also be working on their own stuff in the meantime, with a healthy dose of laughing at stupid internet shit together.)

13. They include you in their perfect version of the future, just as you would a romantic partner, because planning for the future isn’t exclusive to the person you’re sleeping with. You share fantasies of taking trips to beautiful destinations together, and treating each other to the finer things.

14. You know if they ever make it to the VIP table, you’ll be right there with them sipping champagne. And vice versa.

15. They actually care about your mental health and well-being, and if they sense you’re working too hard or depriving yourself too much to make something work, they’ll be honest with you and give you real feedback about slowing down.

16. They also know when you’re being an asshole, and will tell you that, too. They care enough to be honest.

17. Your long-term goals feel simply more reachable because you know that you have them to support you for your short-term ones in the meantime.

18. You feel genuinely inspired by their own life, sense of self, and commitment to working on what they want. It’s not that they live a perfect life, or are already super rich and successful, it’s that they know what they want and go for it — by their own definition. And that gets you jazzed to do the same.

19. One of your dreams with what you would do if you had a ton of disposable income is to do something really, really nice for them.

20. They are always there for a little pick-me-up call or text if you’re feeling like you’re losing steam on a project. They’ll actually give you good feedback, and maybe even provide a new way of looking at something that helps you move forward. It’s more than just a “it’ll be okay, that sucks,” like you’d get from some other friends.

21. The best part is, you know that even if you don’t make it as big as you’d like to or reach all of your goals, they’ll still love and respect you for who you are. Their love and support is not conditional on what you have or how impressive your resume looks, and that safety net makes reaching for the big stuff feel all the more possible.

Image via Sex and the City