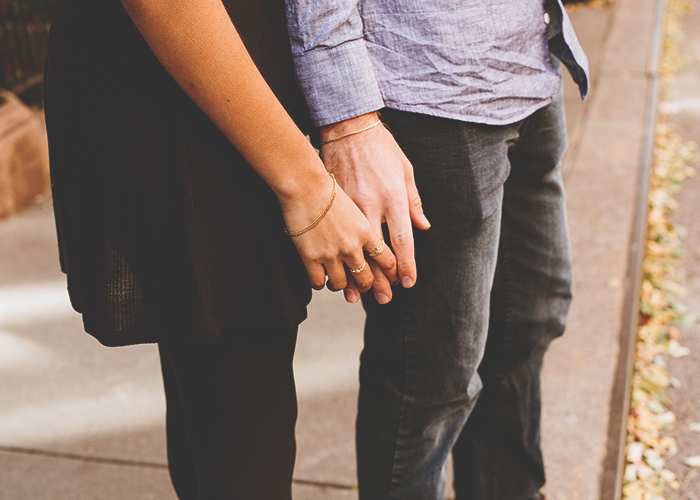 That initial moment when you lock eyes with someone and feel a spark of connection, you’re hardly thinking about whether or not your financial philosophies are on the same page. But as a relationship progresses, money matters become more important: planning for a shared goal like a vacation, or deciding to move in together should be a way to see if your values are aligned for the long-term. Money magnifies the ways we try to impress or conceal at the beginning of a relationship and, as time goes on, the places in our lives where we feel more invested.

I’ve always been one of those people who trusts some vague notion of intuition when it comes to falling for someone, but in hindsight, I can see that certain relationships revealed our incompatibilities through our financial differences. After all, money is often difficult to discuss even with people you trust implicitly, never mind in an early stage of getting to know someone — especially someone you are trying to convince to spend more time with you and eventually love you forever.

By now, I’ve got plenty of dating experience, and in an effort to shelter you from my own mistakes, I’ve singled out four types that you might want to avoid as you travel down the path to financial wellness.

1. The One With “Daddy Issues”

“Peter will pay for it,” was one of his classic lines, and he would swipe the AmEx to fill my gas tank, or to pay for coffee. He wasn’t speaking in third person; Peter was his dad, a guy I’d never met, who supposedly worked at a supermarket and funded his estranged son’s extravagant lifestyle. Red flags? Everywhere.

Eventually, it became clear that Peter didn’t work at a supermarket, but for one, in a corporate office somewhere — hence his ability to pay the bills. Most notably, this ex would only flash the credit card when there was someone else around to impress, so I didn’t reap its benefits unless we were on a double date or out in a group. I remember one time specifically looking around for him at a bar and being told he had bought a round for everyone and promptly left. Ultimately, things ended in a breakup at the beginning of a 22-hour car ride — should have guessed. Longest car ride ever. And yes, Peter paid for the gas.

I once lived with a guy who was extremely secretive about his finances. Although he refused to buy a laptop, he would happily use mine, and then slam it shut when I caught him on the Wells Fargo homepage. I always felt like the secretive behavior was because he was embarrassed about being broke, so I’d find ways to overcompensate, and often pay more than my share, simply because I didn’t want him to worry about money.

I decided that if you’re ready to live together, you have to be willing to talk openly about where you stand: how much you make, and how much you’re willing to contribute. You don’t have to talk to everyone about money, but if you live with your significant other, it’s time to undress, financially, and show what you’re working with. No surprise endings here: his secrets caught up with him, and not just financial ones.

There was an older man who was extremely generous, almost to a fault. I’d wake up with plane tickets in my inbox that he had purchased to fly me somewhere for the weekend. After an especially lavish little vacation, I wanted to pay for our last dinner, to feel like I was contributing. He refused, and sneaked off to give his credit card to the waitress before the bill came. He said, “When you make more money, you can pay.” I admit: I felt undermined.

This one was a blast for a little while, but for long-term, I want to feel like I bring something to the financial table, that my voice and my money counts. Just goes to show that you can’t buy love.

I love-love-loved this boy for a long time, and then he drove my car off the highway and into a guardrail, and I saw our deepest differences start to show. “I’m afraid I won’t be able to forgive you,” I remember saying. Not for losing control — it was raining; I was playing with the rearview mirror; it wasn’t totally his fault — but for not stepping up, for not pitching in and helping out when I didn’t have a car for a while, waiting for insurance to process and to find a new car I’d like to drive.

I thought about what I would have done if the tables were turned, and if I were the one who wrecked something important to him. I would have done anything not only to replace it, but more importantly, to make his life easier in the meantime. To show some care.

A few months ago, he apologized to me for the thousandth time. “I still think about that,” he said, over a fancy coffee (his treat), “and I still feel bad about it.” I forgave him a long time ago, but difficulties test a relationship, and ours wasn’t up to the test.

Ultimately, it comes down to the same question you might ask your SO in any other area of your life: what do you value? I prefer openness and equality with a healthy dose of reciprocation, but you might have other things in mind. Perhaps you truly value your financial privacy, or you see generosity as a trait superior to all else. Money can be an awkward topic, but it isn’t going to leave your relationship anytime soon, and even if your financial lives don’t align at the moment, it’s important to at least express what you appreciate.  As long as your SO can respect your values and you can do the same for them, you’re working toward a happy and abundant financial life.

Jamie Burgess is a writer from New England currently living landlocked in Northwest Colorado and writing for Cinch Financial. Her financial goals include: paying off her graduate degree in English, eating well while traveling the world, and loving her job so much that retirement becomes optional. One day, she might open one of those farms where people can do yoga with goats.