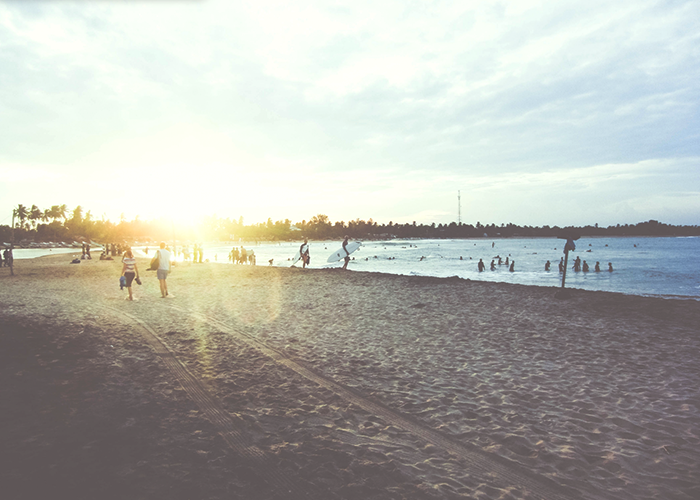 One of the hardest things about your 20s, or at least one of the hardest things about your later 20s, has to be the expectation that one day you will “feel like an adult,” which never, ever happens. When most of us are 20, we are very much in an extension of teenage-dom, often in school or floundering just outside of it, figuring thing out and more focused on the pursuit of our next night out than anything having to do with bettering ourselves. We look at Real Life as a thing that is yet to come, instead of something we are actively living — all of our mistakes and self-defeating behaviors seem justifiable when we think of ourselves as just taxi-ing on the runway.

But by the time most of us turn 30, we have a whole host of expectations about what we’re supposed to be, do, have accomplished, and want. We look at where our parents were at that age — often married, often with us already –and shudder at how far away that might feel. The growing up that does happen, and the progress we do make, often happen while we’re too busy paying attention to other things. With so many of the traditional goalposts of “real adulthood” out of the question, financially or otherwise, we never really know when to consider ourselves grown-up. We’re not home-owners, we’re not parents, we’re not in some corner office with an assistant to get our coffee. How can we really tell how far we are from 20, and more importantly, how can we satisfyingly quantify it?

I don’t think anyone “feels like an adult,” maybe in their entire lives, because that sentiment was always associated with some kind of all-permeating understanding and confidence about life that never comes. We imagine that “adults” have some kind of master key to life’s problems, and are never confused or scared or hesitant in the way we are as kids. This is nonsense, of course, but we don’t really accept or understand this until we’ve already berated ourselves for not feeling grown-up enough.

So it feels important, then, to force yourself to note the progress you’ve made, and to look at your life through the prism of who you were even just a few years ago. We have to create our own goalposts, our own expectations, and our own markers of adulthood. We have to learn to create that confidence, and defeat that near-universal impostor syndrome, on our own terms, because no one is ever going to approach us and hand us some kind of plaque marked “Adult” to confirm our entrée into the new bracket of life. If we want the quiet, self-assured attitude we most respect in our elders, it is up to us to decide that we are worthy of it, and we can only do that by fairly assessing our own pathways. It’s not about who you are in comparison to him or her, it’s about who you are in comparison to yourself.

So, as someone who has always been exceptionally bad with money, I wanted to take some time, at the halfway point of what has been the most professionally-chaotic (and fruitful!) year of my life, to think about the progress I have made with money. I haven’t become some financial maven, of course, but I’ve managed to seriously overcome some big, bad habits, and instill some productive new ones. I’ve made choices that felt natural and good, choices that only a few years ago would have been avoided at all cost, to my own detriment. I’m slowly making better choices with money because I care more about myself, I respect myself more (and deeply respect my partner, who deserves my good choices), and because I want my future to be something of my own construction. I am no longer happy to make mistake after mistake with money and assume I’ll figure it all out at some undetermined point down the road — I want to be building things, intentionally, block by block.

These are the four biggest financial goals I’ve reached this year, without really trying. They may not be up to some mythical, arbitrary standard of adulthood I set for myself when I was a kid, but they’re progress. They’re growth. And I’m going to savor my successes.

1. I pay my credit cards in full as a first priority, and enjoy doing it.

It was very odd for me, when I got a large check recently, to see that my instinctual reactions were two-fold: 1. I put away 90% of it, and only kept a bit for spending on something fun and reward-like, and 2. Out of the small part I kept for myself, I used a third of it to pay off the balance on my teeny-tiny rehabilitation card I got when I first moved back to the States, when my credit score was disastrous. (I have three credit cards total, two of which are much, much higher-limit and have things like rewards and points, and both of those are shared with Marc. I could theoretically get rid of my peasly rehab card, but I find it’s important for me, mentally and financially, to keep a small card with a few things on it that is entirely my domain. Most of my now-pretty-good credit score has come from those shared cards, but I wouldn’t feel good about it if I couldn’t say that part of it wasn’t from my own little card.)

I hated that I had a balance for a few tight months between checks, but I was determined not to ask Marc for the money, and I was also determined not to count paying it off in the 90% of the money I was doing “smart things” with. I spent that money, I should take it out of my fun money, because that’s what happens when you don’t pay it off. That I actually wanted to clear that balance, instead of paying the minimum and doing something more fun with the money, was shocking to me. 23-year-old Chelsea wouldn’t know me, but here I am.

2. I give money to someone if I don’t feel I can handle it.

I should also be transparent here in that I handed off that aforementioned 90% to Marc who allocated it to various things — paying for certain things we’d been putting off, replenishing an emergency fund, holding it for rent, etc — as I directed him to. To some people, this might seem either deeply un-feminist or deeply immature of me, or both. But the truth is that a big part of my growth, and a personal goal I have in light of my incredibly irresponsible financial history, is that I don’t trust myself with large sums yet. If I have a big number in my account, I’ll be more lax about how I allocate it, and spend it on at least a few things I’ll regret. If I take most of that money out of my hands and have someone else click “send” on the various deposits, and only leave myself a small fun allowance, I’ll be much, much more judicious. My next goal is, with my next big check, to handle it all myself. But for now, the fact that I was willing — excited, even — to hand off the vast majority of my hard-earned money to someone I knew would do the absolute smartest things with it feels like a victory.

3. I take stock of my belongings — literally, in writing — before buying anything new.

Whether I am going on a trip and want to make sure I have 99% of whatever I’ll need, planned down to the outfit, or I’m thinking of a bigger purchase I’d like to make and go through about 75,000 options for it online before settling on one, I have become much more methodical about assessing what I actually have, and what I need. I used to never take stock of what I had, and that resulted in things like chaotic travel packing (which meant buying a bunch of stuff while on my trip), or re-buying the same thing I already own in different versions because one night I was impatient and remembered I have Amazon Prime.

It’s been really useful for me to start actually using things like Google Sheets (which I was formerly allergic to), and taking the time to consider purchases for at least a few days — as well as check all of my options for how and where to buy — before settling. It’s resulted in a year free of fast fashion, with much less spent in general on shopping and a much more confident feeling when I actually do go to buy something. Writing lists and making sheets have become sort of a calming default activity, and I don’t hate it.

For many of you, this “goal” is probably something you’ve never even considered, but for me, not feeling the temptation to just shop for the sake of shopping as part of any good ~travel experience~ is huge. I will, of course, buy something if I actually need it, but part of my spreadsheet-making before any trip includes a column of “thing(s) I want to get while there,” usually stuff that’s either way more available where I’m going or something that’s overall missing from my wardrobe/life and would be fun to acquire while away. This means that my shopping is pointed and planned-out, and therefore doesn’t result in me just wandering the shopping district aimlessly for an afternoon, looking for a reason to spend. And while I will always prefer urban travel, and part of that will always mean walking through the markets/shops/high streets, I now have learned to go with a mission, instead of a nagging feeling that if I didn’t get a little retail therapy in, it wasn’t a complete trip. (I’ve even left my cards at home on days I knew I was going to be doing some market-wandering, so I could limit myself to a tiny bit of cash for random trinkets.) It’s a small mental shift, but a big one that, in a year of unusually-heavy travel, has already saved me hundreds of dollars.