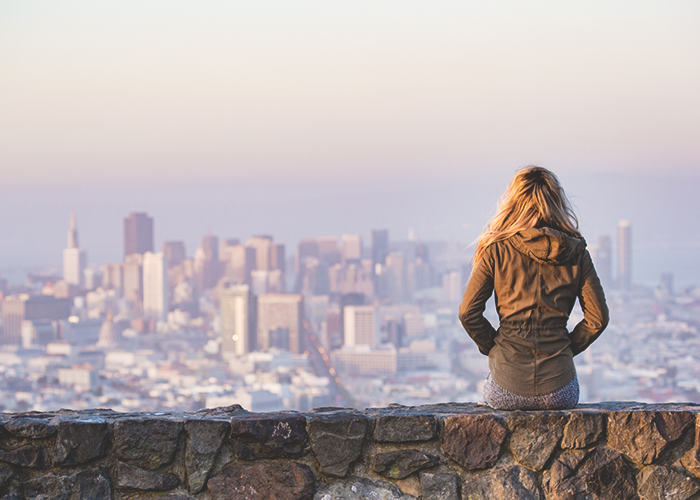 It has been a solid amount of time since I’ve had a block of days without any work to do. This isn’t because any of my jobs or responsibilities on their own are particularly terrible or demanding, but more the fact that I have so many different jobs and responsibilities that it is nearly impossible to coordinate a time where I actually have no outstanding work to be done for at least one class or job.

I’m a person who loves the idea of having a totally blank slate, but when it comes down to it, I get bored really quickly if I don’t have anything I need to do. (I’m sincerely just a boring person deep down inside, and the only thing interesting about me is doing shit that I love, like working, writing, being active, etc.)

This week, however, was different. TFD took a lil’ holiday (sorry y’all, we missed you, but goodness did we need it), and I also spent the past week in-between jobs waiting for a new one to start early next week.  Since I am also currently on winter break from school, and my new internship doesn’t start until next week, that meant I had one full calendar week with zero responsibilities (besides, like, being human).

When I first realized this (Thursday, December 22nd – a very blessed day indeed) I wasn’t quite sure what I’d do with the time. I toyed around with the idea of scheduling myself as if TFD would still be posting, and writing every day as usual (or extra, if I had the time) in order to create a little arsenal of articles to use on days when I felt overwhelmed and uninspired. I thought about calling neighborhood contacts, and telling them I was newly free to pick up some extra babysitting hours. I even drafted an email to my internship supervisor to ask if I could start working early.

The fact is, I’m used to working, and I do it often, not because I have to, but because I want to. I’m not a workaholic by any means — I hate being bored. One agenda-less day is enough to make me crazy. In fact, as I write this, I am in the middle of my week off, and I’m fidgeting around at 11:17pm working on articles for TFD because I’m too bored to relax. That’s just me. I don’t think it is lazy or unproductive to take a break from everything (especially during the holiday season), and I see so much value in the ability to take time off to relax and recharge. I’m certainly not overworked (I live a pretty easy life, to be honest), but I definitely like to keep myself stimulated most of the time. Even though I’m not entirely capable of turning off my brain in the name of rest, this week off is amazing. I feel like even the lifted pressure of having somewhere to be or having a deadline for a project is enough to have relaxed me, and make me feel like I got what I needed out of my little vacation. I got a lot done, but just felt way less stressed about it because I had no strict timeline to get things done – I was just doing them because I wanted to. That is my favorite kind of productivity.

With that, I’ve decided to detail all of the wonderfully relaxing, enriching, and somehow still productive things I’ve been up to during my past few days off. When you’ve got hella #2017goals, it never hurts to get started early on them, and that’s exactly what I’ve been doing. Here are the actually-productive things I did with my winter break, to squeeze every minute of sweet, relaxing productivity I could out of my long, empty days.

1. Began to design/plan out my new home.

Which I ~officially~ moved into this week, and I couldn’t be happier to wake up in a home that is mine and Drew’s. I know it is kind of an “extra” expense to spend on home décor that isn’t necessarily essential, but it is really important to me to live in a home where I feel comfortable, and am surrounded by things that make me feel happy. I set aside little bits of money over the past few months to put toward building my new little home, and Drew and I spent a few days this week going out together and collecting things to make our place a little more “ours” (like these

— omg). It was so fulfilling to do something this week that was so productive and had such a beautiful end result, especially because it felt like so much fun instead of feeling like work.

Since I’m now officially moved, I spent a lot of this week figuring out the financial side of leaving my parents’ house. I like to be organized with my money, and although my income hasn’t changed much over the past few months, I now have the added expense of paying rent. Because of that, I’ve had to adjust the general monthly budget I’ve been using for the past year to include my new expenses. I also had to take into account a few money goals that Drew and I plan to work towards over the next few months. (Stay tuned for more on that later this week!)

3. Made a detailed list of goals for the upcoming semester/New Year, complete with actual working tips on how I plan to meet them.

Last January, I wrote a little list in the notes section on my phone of both short and long-term goals I had for myself. I worked really hard at them, but eventually totally forgot the list on my phone existed. When I was searching through a few weeks ago, I saw the list and realized I had accomplished every single goal (!!!). I was so shocked to see that, and so proud that I accomplished all of the things I’d set out to when the year began. I’m low-key hoping for it to serendipitously happen again, but as a backup plan, I spent some of this week outlining a gentle timeline for myself of how and when I want to accomplish certain things over the next few months.

This includes scheduling and time-management between the two jobs, in accordance with my school schedule and general operating capacity. Between the new job (which is very early in the morning – like, 5 a.m. -9 a.m. early) and new internship, I need to figure out how to add two new things into my manageable-but-slightly-tight school-plus-TFD schedule. This week, I focused on planning

a weekly schedule I can follow that I’d actually be able to get pumped up about by sneaking in some new activities that excite and motivate me, like scheduling an early-morning workout after my morning job.

Not just like, 20-minute-power-nap sleep. Real, blissful, eight-to-twelve hour nights of sleep. Like I’ve pretty much not gotten in years, and like I might stop getting once I start my new job on the 9th and go back to school a week later. Yaaaassss. Let 2017 be the year of me getting sleep every night, and not acting like it is ~chic~ to cover my all-nighter under-eye circles with concealer in the morning like a badge of honor. Overworking yourself is never chic. Losing sleep is never ever chic.