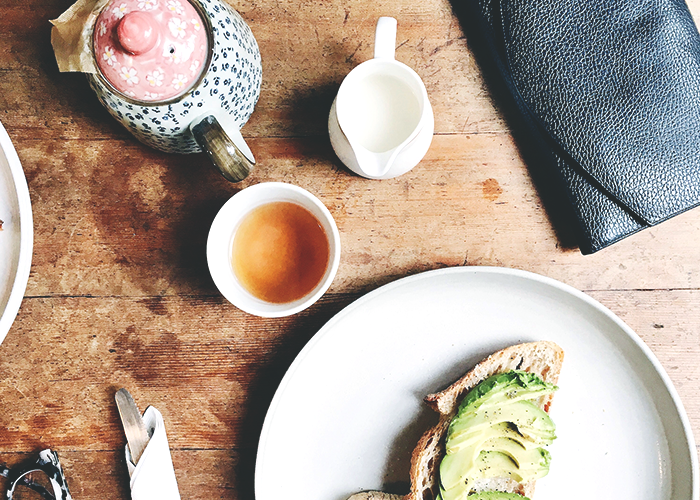 I absolutely love cooking. It is one of my favorite things to do — in fact, oftentimes when I’m in the kitchen cooking or baking something, I will actually say “This is my favorite thing to do.” out-loud to myself. (Mostly because I’m a loser. But also because it seriously is something I love doing.)

When looking for a new place to live, I always think first about the kitchen. I’ve always pictured myself in a big, spacious, white kitchen — one with big windows and plenty of natural light — where I can wear some sort of Anthropologie-chic apron

and cook up a delicious hot meal for Drew and I at the end of a long workday. However, that is really hard to find in Connecticut on a $1000/month budget.

When it came to picking this apartment, I had to make some sacrifices. We had important boxes that needed to be checked off: a convenient location for Drew and I to get to work, pet-friendly for our little Frenchie, two bedrooms because we require some sort of home-office and host guests semi-regularly, and an in-unit washer/dryer, (because that was a non-negotiable for Drew — I could have lived without it tbh). We eventually found a place in our budget that had everything we wanted except for the nice kitchen that I wish I could have. In fact, our kitchen — although a bit more aesthetically-pleasing than our old one — is actually a bit of a downgrade from our last one in terms of size, layout, and overall functionality.

I wish I were the type of person with the budget (or the energy) to keep searching for an apartment that was ~absolutely perfect~, but we eventually decided that this one was just close enough to being perfect for us that we had to jump on it.

We’ve lived here about two weeks now, and I love it in spite of the kitchen. In fact, I’ve Pinterest-ed the shit out of it, and have spent a good chunk of our time here researching  I’m figuring out how to make it work for me. Here are the five ways I’m making my small-as-heck kitchen work — and how you can make yours work, too.

This isn’t exactly a ~secret hack~, but my lack of cabinet space in my new place has made me a lot more creative with how I store kitchen-things, and I’ve become a firm believer in shelves. Vertical storage is often forgotten about, but it is easily the best way to squeeze extra space out of a small room.

We plan on putting up shelving of some sort on the one empty wall in the kitchen to put pots/pans on that don’t really fit nicely or conveniently into our kitchen storage, like this. Having certain things sit on shelves in the kitchen rather than tucked in the back of a cupboard also means that they are easily-accessible and convenient to grab, which is a super-win if you’re in a tiny kitchen that you’ll already be fumbling around in while cooking.

Similar to shelving, hooks are a great addition to a small kitchen because they fill up empty space that would otherwise go unused. I got really pretty rose-gold looking ones in the Target dollar spot (although these copper ones

are really similar and equally cute!) and I’m in the process of hanging them on the wall behind my stove top, and behind the sink to hold scrubby brushes, cooking utensils, dish rags, etc. — meaning those things won’t get lost in overstuffed kitchen drawers.

I used to have a pantry, which meant that there was a designated spot in the kitchen for most non-perishable food-things to go. However, even though the new apartment has a prettier-looking kitchen, it doesn’t have a pantry, and the lack of cabinet space means that some things need to be sacrificed. We’ve realized that in order to achieve the functionality we want, we may have to stretch our kitchen a little outside of the kitchen. For the most part, we just plan to keep a small beverage bar right outside the kitchen door in our dining room (think bar cart, except mostly with all of our different coffeemakers rather than alcohol bottles — we have a regular coffee pot, a French press, and an amazing Nespresso

machine I got for my birthday this month — thanks, Mom!) We’ll also probably keep a few other less frequently-used appliances stored in that unit, since we’re planning to get one that is more of a piece of furniture than a cart. Kitchen appliances like toasters and blenders are bulky and suck the space out of kitchens, and although I use them often, I definitely don’t use them all regularly enough to justify giving them any of the very little easily-accessible kitchen space I have.

I have a pretty small fridge, which is totally fine except for the fact that it often means that I push stuff to the back to make space for other stuff, and then forget I even have the things in there. This sucks because I’m always wasting food that’s spoiling before I remember that it is in my fridge, and also because forgetting about a tub of yogurt that got kicked to the back sometimes means I’ll find an extremely moldy tub of yogurt in two months time, which is never pleasant.

Luckily, Pinterest has a lot of little hacks and ideas for fridge organization — something that I’ve really never thought twice about — that seem like they could actually be really helpful. I want to organize the fridge in a way that makes sense, and allows me to make the most of the space, and gives me the ability see all (or most) of what is in there at a glance, so I don’t start spoiling food items that I can’t see tucked behind the carton of milk in my tiny, cramped refrigerator.

Taking advantage of the unused space on the inside of the cabinet doors (via vigorous Pinterest-ing) is another way I’m going to save space. The cabinet next to my stove that is filled with herbs, spices, and sauces (affectionately and formally referred to as “Flavortown”) is overflowing, due to my love of well-seasoned food. Popping some of the contents of Flavortown on the door like this looks like it’ll be a quick-fix for my problem — and it looks pretty good, too!