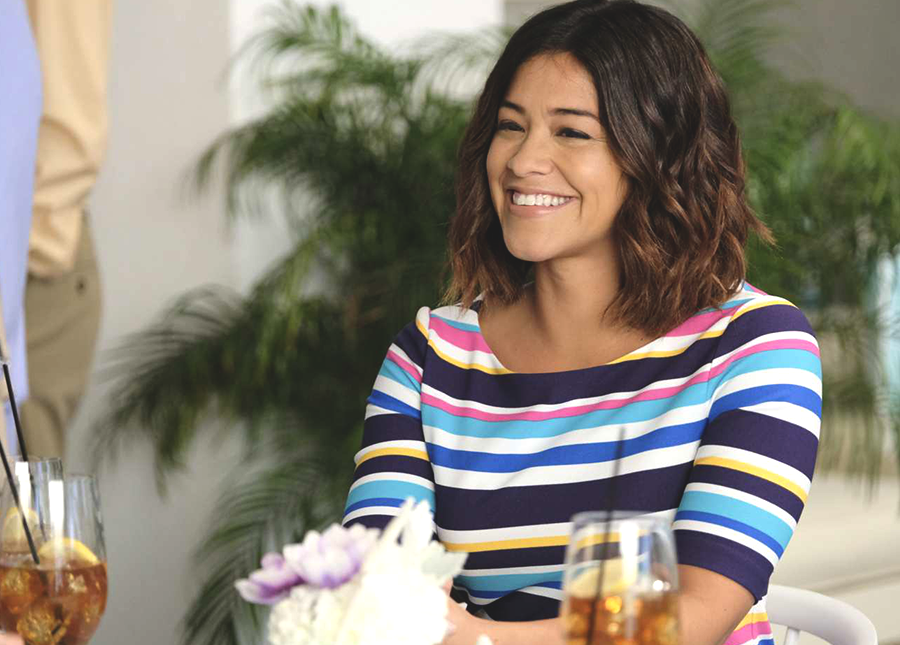 Ask me what my current favorite show is, and I will without hesitation reply with The CW’s Jane The Virgin. For me, it’s the kind of show that reminds me of why I love TV, because I truly believe it has the power to make our society more empathetic and understanding. When I watch an adult, female character with a college degree and aspirations to be a writer, like Jane Villanueva, live in her grandma’s house and not feel ashamed of it, I can relate, and I begin to feel a little more okay about my own situation.
Now, Jane The Virgin is first and foremost a telenovela, which means in keeping true to the genre, there are some fantastic elements that divert from it being totally realistic. For one, there’s the fact that Jane has a child only because she became accidentally-artificially-inseminated-with-a-rich-dude’s-sperm (the rich dude being Rafael), and the fact that she’s the daughter of a wealthy actor whom she didn’t meet until adulthood. There’s also a love triangle between herself, the wealthy sperm-donor, Rafael, and her cop husband, Michael; some evil twins; backstabbing; and plenty of hotel crime mysteries.
Still, even with all the “unrealistic” parts of the show, one of the biggest reasons I like it is because it’s honest about money. For one, it’s careful to highlight the various ways money influences literally everything we do in our lives — from the jobs we take to the very goals we set for ourselves. Rafael’s intense desire to be a seen provider who never has to say no to his son drives him to do some shady things for money, like get involved with insider trading. Jane’s desire for rigid stability leads her to make sacrifices, like give up a dream opportunity to move to a big city to pursue her writing.

4. Money does not define who you are.
There is a tendency for men to define their masculinity in terms of their salary, and lately, for independent women to view their financial status as a measure of their success as a feminist taking over a patriarchal world. I’ve always taken issue with this, because I know money should never be seen as more important than values like respect or honesty.
So when Rafael loses his massive inheritance due to a birth certificate scandal, he undergoes an identity crisis, because he defined so much of his existence in terms of his wealth. As a result, he goes through many humbling experiences. He goes to jail for insider trading, and is forced to move into Jane’s family’s house when he has no place to go. He also takes up a job working as a bartender at the hotel he once owned, which causes him to feel embarrassed. And yet, Jane is the one who tells him to not be ashamed, and reminds him that she would be there for him no matter what his job was.
In any case, Rafael’s story cautions defining self-worth by one’s net worth, but it also serves as a more positive reminder that the ones who truly love you will stick by your side regardless of what you have (cue “21 Questions” by 50 Cent).
5. Money can do a lot, but it can’t do everything.
I think the realest thing Jane The Virgin does with money is present us with moments where an exorbitant amount of it saves the day in deus ex machina fashion, but then, it undercuts us with a tragedy where it’s utterly helpless. The biggest example of this is when Rogelio, Jane’s wealthy father, pays his staff to build a replica of Jane’s home on his studio sound stage after her living room is flooded by a burst pipe. This allows her to have the “backyard wedding” of her dreams in the nick of time. However, just a few episodes later, her husband, Michael, dies an unexpected and tragic death — and the saddest part is that no amount of money can fix the situation.
In another episode, when Rogelio tries to apologize to Jane for being absent during most of her childhood via a series of expensive gifts, Jane feels insulted because she knows he cannot buy back the childhood he missed out on watching. And when Rafael watches Jane choose to marry Michael over him, he’s forced to confront his personal issues — he learned all the money in the world cannot make someone fall in love. In watching these moments, I am reminded how money is important, but it is not everything. And as powerful as it may be, I think it becomes a lot less scary knowing there are some situations that it just can’t control.
Savanna is a freelance writer in Northern California whose hobbies include all things theater and dog-related. She hopes for a world where avocados will be included in the price of her entrée and a 12-step program is widely available to people who obsessively collect air miles. Follow her on Twitter here.

Image via The CW