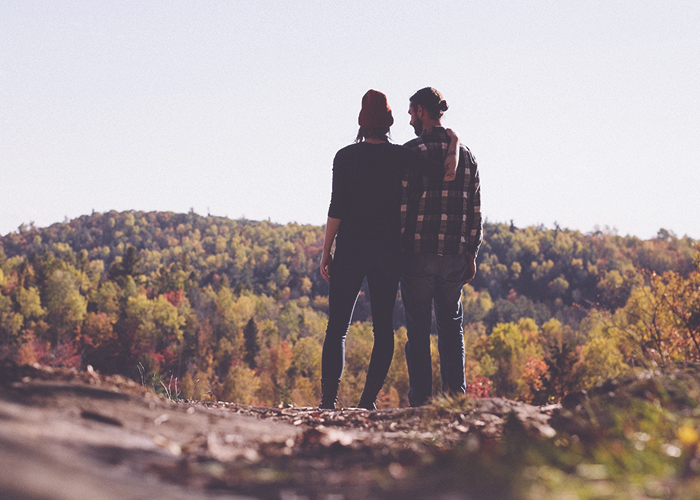 In the interest of “baring it all,” I’ve returned with more (yes, I have more) thoughts on love and money. I’m currently entering new relationship territory, and I’m entirely terrified. I know that dating new people and getting to enjoy all the exciting “firsts” that come along with new relationships is supposed to be a fun time, but as someone who has had two consecutive failed (not just “ended,” seriously miserably failed) relationships, I’m almost too scared to dive in, for many reasons. Although I’m unsure of whether or not I’d consider any of my relationships-past to be financially-abusive ones, I do know that there were things about them that were just “off,” especially in terms of the role money played in each relationship.

I often felt like a caretaker for one of my last few boyfriends; I felt financially responsible for him, and stressed out as if I were a 21-year-old single mother with a 20-year-old child. I felt like he drained my resources, and gave nothing in return. I felt obligated to care for him, even though I knew it wasn’t my responsibility. He made me feel that way. In the other relationship, I mostly felt confused. I felt judged by him and often by his family for not making or saving as much money as him, even when I knew I was working twice as hard and just had more financially responsibilities to manage. There was a period of time where I had more money than him, and a period of time where I had none, and he had it in excess. During both of those times, I felt responsible for funding the relationships, and felt like a disappointment if I wasn’t able to foot the bill for our love myself. Simply put, if I (or we) wanted to do anything, I knew it was coming out of my wallet. If I wanted to leave the house, it was going to be solely my job to fund the journey (even if the journey was just to the gas station for a cup of coffee).

As I’ve mentioned before, none of these concerns I have with my previous relationships (which I consider to be, at worst, financially unstable) are to say that I believe I should be treated like a ~queen~ and showered with gifts or free meals. But I do believe in teamwork, and I believe in give-and-take. I believe in taking care of the people you love, and being taken care of back.

I’m still working out the kinks in my belief system. I’m still living and learning, and developing a more stable list of non-negotiable terms I plan to carry out in my relationships from this point on in life.

But I have also learned lessons. I have learned a few things the hard way, and these five in particular will remain with me forever. I’ve always thought I was loving the right way — the best way — until it suddenly became very apparent that I wasn’t. I always thought everything was perfect, until suddenly it wasn’t. Going forward, these five lessons are what I will reference when I’m unsure, and will be the building blocks from which I will expand and learn with each new relationship or romantic situation I find myself in.

1. You shouldn’t choose someone to date based on whether or not they make good money, but you should choose someone to date based on whether or not they have goals and aspirations.
I’ve dated people with prestigious jobs, and didn’t feel any more impressed by their money or power than I was by the struggling creatives I’ve dated (who were at least working hard and actively pursuing a goal). It is the brooding artist types who say they are working on some super-secret big creative project that never seems to come to fruition that I’m skeptical about. Being a motivated human being is far sexier than sitting on a fat stack of cash (although I’m not going to lie, the fat stack of cash doesn’t exactly hurt your case).

2. It will never be your job to fix someone else’s financial mistakes. Or any other mistakes they make. You can be there to support them, and you can even help them clean up their mess if you want – but it isn’t your responsibility.
I have given loans to men before to try and help them out financially, and ended up never seeing a single penny of that money again. I was strapped for cash at those times too, but I often felt like since he was more strapped for cash, it was my duty as his girlfriend to fork it over. It wasn’t. I vividly remember sending an ex off on a trip and draining my bank account so he could bring extra money, because he was scared he wouldn’t have enough for food while he was away. Once he left, I promptly went to find my parents and burst into tears telling them how stressed and sad I was about it. It was sad that he was in that position, but he shouldn’t have been traveling in that situation, and he definitely shouldn’t have made me feel responsible for funding it. I shouldn’t have sacrificed my own security so my crappy boyfriend could live a cushy life, and be further enabled by me to not make better financial decisions, or actively job-search.

3. If the person you are dating makes you feel shitty about what you do for a living, make them feel shittier by dumping their rude, judgmental ass.
Sometimes, if someone comments negatively on what you’re doing with your life, they are just trying to help you. If someone who loves you sees that you’re stuck in a job you don’t love, or a job that makes you no money and consequently feels like a job you can’t love, then that advice is probably not coming from a place of judgement, but rather from a place of care. However, if the thing you are doing is a thing you love deeply, and a thing that you profit off of in some way, and you feel satisfied with it, they should be supporting you. Even if it isn’t prestigious or impressive. If they don’t support that, then you’re not the one for them. That is okay, too! It doesn’t even necessarily mean they are a bad person. ~Love~ isn’t always enough. People are attracted to certain things, and want certain things for their futures, and if the ability to afford a different future than the one you are comfortable with is one of them, then you two might just have no business being together anymore.

4. If you ever spend money on your partner because you think you need to in order to gain their affection/forgiveness/attention, your relationship is not healthy.
I will never be against buying a “for being you” gift for my SO for no reason other than the fact that it is a fun and nice thing to do. But in my last relationship, when he was treating me like dirt and I felt him slipping away, I found myself spending money on him left and right to try and impress him, or prove to him that I was ~worthy~ of his love. (Spoiler — he wasn’t worthy of mine.)