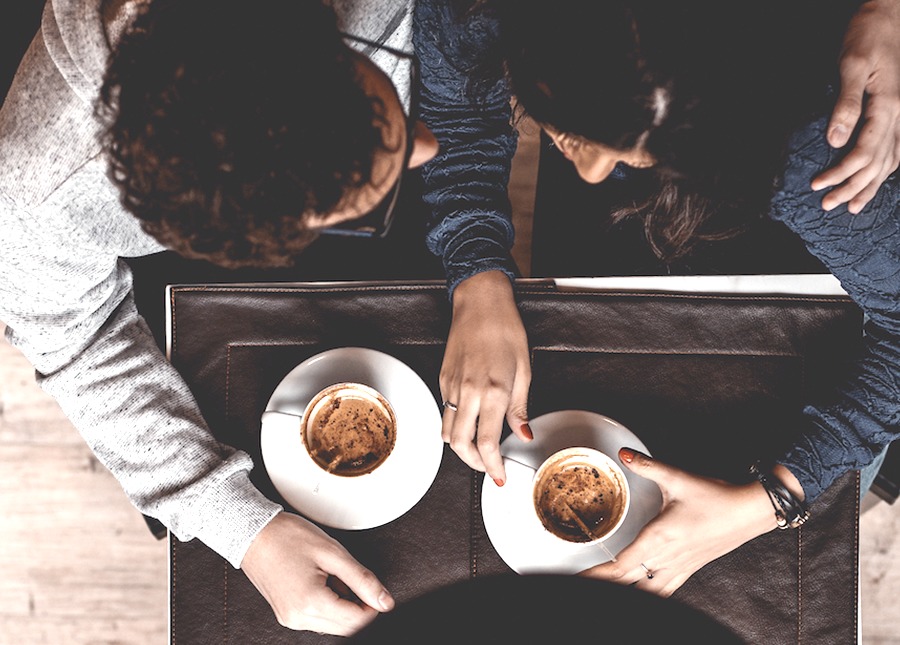 If you are a woman in the workplace, there’s a good chance you will receive unsolicited male attention at some point in your career. It can be incredibly frustrating to ward off unwanted advances in a discrete and professional way while also maintaining a friendly demeanor. How do you firmly let someone know you’re not interested without water cooler gossip gaining you the reputation of that B in cube 23? Turning down someone in any circumstance is difficult, but it gets even more complicated when you have to interact with that person day after day.

When I began my job at a male-dominated engineering firm, it wasn’t long before I received overly friendly attention from a coworker. At first, his welcoming personality helped to ease the nerves of starting a new job, as he would often stop by my office just to chat and see how I was doing. I didn’t mind the bit of small talk to help break up the monotony of the day, but eventually, his visits became excessive. I started to get uncomfortable every time he dropped by. I share an office with a different coworker, so I felt awkward with him talking to me for 20, 30, even 40 minutes at a time while she was trying to work. Since he was coming to my office, I felt like I couldn’t escape by just walking away, so I tried making subtle hints that I wanted him to leave: turning my chair away, shifting my attention towards answering an email, short “mmhmm” or “yep” replies that wouldn’t prolong the conservation. I once even tried leaving for the bathroom so he would take a hint that I was done with the conversation, but when I came back, he was still sitting in my office.

In  retrospect #1: Instead of trying to use body language to communicate my discomfort, I should have met with him in private and said something along the lines of, “ I really appreciate how welcoming you have been to me, but I don’t feel comfortable chatting with you in my office while everyone around me is trying to work. From now on, let’s catch up in public office spaces only so we’re not distracting anyone.”

The next time he came down to my office, I did try a somewhat more direct approach; I let him talk for 10 or so minutes, and when I was ready to be done, I turned to my computer and told him I had to get back to work. I expected him to reply with something like, “Alright I’ll see you later!”, but instead, he made the situation more awkward by saying, “Oh so you want me to leave then?” in a very taken-aback sort of way.

A few days went by without any unsolicited visits, so I thought I was in the clear — until I ran into him in the hallway and foolishly asked how his weekend was (as I would do with any other coworker). Well, he took this as an invitation to resume the visits, during one of which he said, “I thought I was annoying you.” I replied, “No I just don’t have time to chat for too long when I have work to do.” For the record, I really didn’t mind talking to him occasionally, and he is a genuinely nice person. But the over-friendliness erring on the side of flirting made me uncomfortable.

In retrospect #2: I now realize that him taking disproportionate offense at my attempts to be direct was his way of manipulating me into second-guessing myself and thinking I was being too caustic. While I expected him to be apologetic for not realizing his visits were becoming overbearing, his negative reaction shifted the dynamic towards him being the victim. I’m not sure this was intentional, but if I had seen through the wounded puppy act, I would have been stronger in continuing with the direct approach.

After I told him I didn’t want to spend work hours indecently chatting, I started getting invites to lunch. At first, I tried to dodge them by saying I had a meeting or was working on a project, but you can only turn down a lunch invite so many times before you start to feel like an antisocial asshole. Now, I know what you’re thinking: Kara, why didn’t you just tell him outright you weren’t interested? Well, it seems simple from an outsider’s perspective, but for one thing, I didn’t actually know if he was interested in me in “that way” or if he just had a hyper-friendly personality type and didn’t pick up on social cues well. For another, my office is within earshot of six other people, so I didn’t want to confront him while everyone else could listen in. I was partly protecting my own reputation, but I also felt somewhat responsible for preserving his ego and avoiding turning the office into an awkward environment for both of us.

Even though I typically don’t take a lunch break, I eventually agreed to go to lunch with him. I naively figured that if I agreed to go once, he would be placated and stop asking. At that point, I felt sort of pressured into spending time with him since I told him I couldn’t talk in my office anymore. He continually mentioned how he found me interesting and wanted to spend more time with me to learn more. These compliments simultaneously softened my resolve and made me feel guilty for refusing the relentless invites. The dynamic shift again portrayed him as the victim and, in turn, made me feel like I owed him something. Consequently, what I thought would be a one-time lunch resulted in even more lunch invites, so finally I worked up the courage to tell him that I just don’t have enough time to take long leisurely lunch breaks.

In retrospect #3: Once again, I believed this would be direct enough to finally get him to leave me alone. I was proud of myself for telling him outright I didn’t have time to chat during the workday or to take lunch breaks, but this was apparently not enough to dissuade further persistence on his part. I should not have incorporated the excuse of “not having time” in order to soften the rejection. As difficult as it may be, sometimes people just need a strong NO THANK YOU.

Since I used my limited free time during the workday as an excuse not to talk to him, he figured it would be a good idea to ask me to hang out outside of work when I would have more time. Once again, he asked this within hearing distance of six other people, so I begrudgingly (and foolishly) murmured, “Ugh, sure.” I attempted to blow him off by telling him I was too busy with other plans every time he would ask. I once even told him I had something planned every single day for the entire month of August. You would think at this point, he would surely take the hint, but alas, he persisted.

Eventually, instead of asking me if I was free on certain days, he would presumptuously request I tell him the date of when I would be free next. I would always counter with “I’ll get back to you” or “I’ll have to check my calendar,” but one day I ran out of quick excuses and reluctantly agreed to go hiking. Luckily, one of my friends agreed to tag along to make it less awkward.

In retrospect #4: I now realize his rose-tinted glasses prevented him from recognizing my disinterest and excuses as subtle rejection. In his mind, he surmised my constant refusals as me just being extraordinarily busy. He believed he was doing me a favor by coming up with a solution to spend time together without interfering with work. Since I had given him the impression of being so busy, my eventual “yes” became that much more meaningful because he thought I must have really liked him if I was willing to fit him into my crazy schedule. Unfortunately, the combination of stress from evading his advances, fear of being perceived as bitchy if I was too direct, and desire to maintain positive relationships with everyone at my new job prevented me from mustering the confidence to be straightforward.

After the hike, he got even pushier in his attempts to hang out with me outside of work. He even took up rock climbing as a hobby because I used it as an excuse so often in dodging his advances. It was at this point that I finally reached my breaking point. Rock climbing was my avenue to decompress from the workday, and now I felt like he had intruded on my space. Climbing became a source of anxiousness because I was constantly afraid I would run into him. If I ever wanted to feel comfortable in my sanctuary again, I had to confront him honestly.

After weeks of incessantly asking me, not if I wanted to, but WHEN we were going climbing, I agreed to go solely so I could speak with him in a non-office setting. The days leading up to it consumed me with anxiety, but I was determined to follow through. I practiced what I would say in my head multiple times, and consulted my close friends for advice. Finally, the day came. I kept the climbing session as short as possible, and I walked with him to a secluded space in the parking lot at the end. I told him I needed to talk to him about something; I took a deep breath and calmly explained to him that I was only interested in being friends and that I did not want to spend time with him outside of work. He took it very well, and although he admitted that he thought our lunches, hike, and rock climbing session were in fact dates, he amicably agreed to stop pursuing me.

In retrospect #5: I was shocked at how easy it was to say what I was feeling once I actually did it, and I immediately felt a weight lifted. I now realize that I was giving mixed messages by trying to let him down easy and coming up with excuse after excuse as to why I could not hang out, then ultimately succumbing to his requests when I felt guilty making up fake excuses. I could have avoided months of added workplace tension if I had been upfront from the get-go.

I’m getting better at speaking up when someone does or says something that makes me uncomfortable. Sometimes I have to remind myself that saying no to someone never obligates an explanation. My coworker’s request to consistently provide him a reason as to why I was not available was presumptive and manipulative. A counter to statement of “I have other priorities,” “I’m not interested,” or simply “It’s not possible” are all perfectly acceptable and professional responses.

Rejecting someone, in general, is difficult, but it adds another layer when you have to find a balance between maintaining a friendly working relationship and gently, but directly, turning someone down. It’s always better to be honest than to let things drag on. However, if a coworker continues to do something you are uncomfortable with, don’t be afraid to involve a manager or human resources to help you. Remember you are there to do a job and you do not owe anyone more than that.

Kara is a working 20-something from Maryland who enjoys personal finance, succulents, traveling anywhere and everywhere, and trying out new hobbies every six months or so. She’s constantly dreaming up new inventions and hopes to one day own her own business.