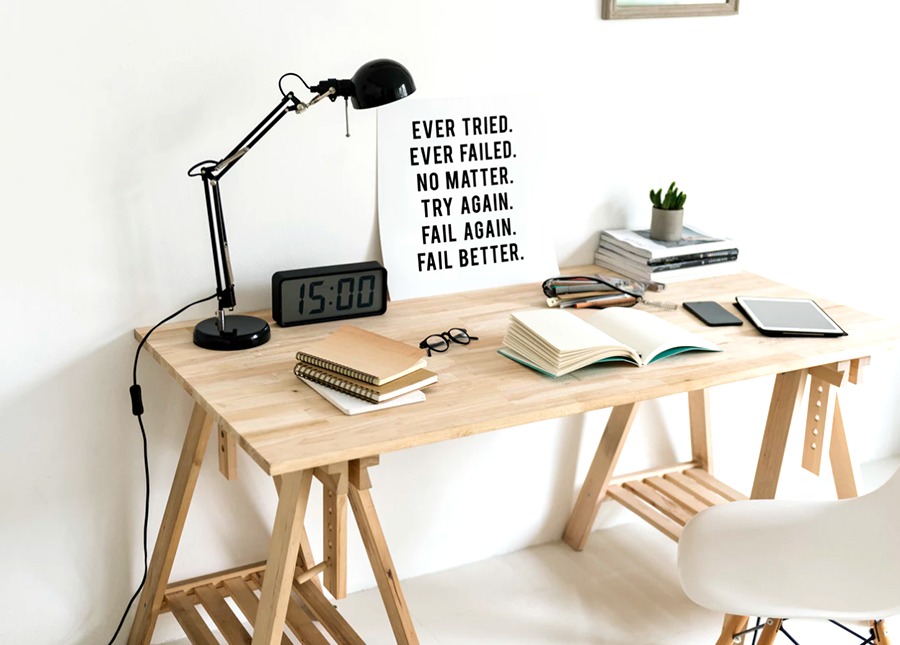 Landing the office job was such a relief. I’d previously spent six months getting two buses to sit under the stairs at a hardware e-commerce retailer, writing product descriptions about sand like an arts degree Harry Potter. But that was in the past! Now I had a nice desk and a phone extension and a porcelain Mac. But then it was two years later, and the complacency had set in. I was starting to get depressed on the bus. It was time for something else.

So I stashed away half my wages for three months, got a part-time job and handed in my notice. The plan was to spend half the week working in the kitchen of an artisan coffee shop, making enough to cover bills and basics, and the other half writing things, reading interesting books and napping in the afternoon. How romantic, I thought. How European.

In online entrepreneurial rhetoric, quitting your dusty ol’ 9-to-5 is framed as an escape, a thrilling act of sunshine-embracing abandon, a fuck-you swerve into a subversive alternative. And, yes, sure, co-workers will widen their eyes and joke about taking them with you, like you’re a breakaway hostage running into the embrace of an FBI windbreaker. But there is loss, too. On my last day, while talking my replacement through his duties, I felt suddenly and unexpectedly bereft. There had been so much mental planning, so much anticipation — lengthened by an extensive notice period — but here it was, and I felt vaguely, unexpectedly sad.

Maybe it’s that nothing hits home the essential pointlessness of your job like schooling a new recruit in the time it takes for a pot of tea to cool. 40 hours a week x 2 1/2 years.., had I really spent 5,000 hours doing this? Then Monday rolled around. Day 1 of life on the other side. I didn’t know where to start. Liberation had arrived and I was totally depressed.

2. You Still Won’t Have Enough Time (But You Can’t Complain About It)

This one’s kind of embarrassing to admit.

Over the course of any given week, I have more freedom and leisure time than anyone I know. I am a young, healthy, child-free single man, with parents still in good shape and no scary debts besides the obligatory student bill. Some weeks I only have 24 salaried work hours and carry home zero stress from it. Outgoings are slim, so extra hours are useful but not necessary: I pay no insurance, don’t care about holidays, and own one pair of trousers and one of jeans (both all-weather black). Aside from scheduled personal training sessions and film preview screenings (I write about movies), my days off are wide open. I am time abundant. I am the Scrooge McDuck of unstructured hours.

And yet. I still, very often, have the feeling that I don’t enough time to do the things I want to be doing, or feel like I should be doing. This is an unreasonable feeling, and an unfortunate reminder that “not enough” is not simply a question of actual resources, but of strategy and, the internet’s favorite phrase, “mindset.” Overcoming this feeling requires new skills like prioritizing, planning, balancing short-term and long-term projects, maximizing the time you have by what is fashionably called “deep work” but might be more accurately titled “good work.” It also, and this is a bit more difficult, means accepting that you’re probably going to always have to deal with “not enough”-ness, and just find a way to press on regardless.

3. You Will Really Want Confirmation You Made The Right Call (And You Won’t Get It)

This is a big one. Shifting out of full-time work is a scary and uncomfortable change to make, especially if you’re naturally risk-averse. At parties aunties will ask, “what are you doing with yourself?” and “how’s the writing going?” And you’ll bristle because what you’re hearing is “are you sure you didn’t mess up here?” and, honestly, you have no idea how the writing is going. So you say it’s going fine, but now you’re thinking about when you slept in on Wednesday and spent the day watching “Your Mom’s House” Youtube clips and you feel scummy and guilty and feckless.

So you race through material, because you want to have something to show for your experiment. Medium writers with shiny headshots will tell you to focus on “process” not “outcome” and you think that makes sense and I’ll definitely do that, just after that after I blast this word count and get this piece up for claps. This is what Gary Vaynerchuk, who is so annoyingly on-point about the delusions of self-styled creatives and self-starters, calls “short-term vanity metrics.” Affirmation-chasing isn’t just a bad strategy — there’s no better way to turn a lover off than to ask them every day if they still like you — it also makes you feel unsteady and unwhole. More satisfying, and trickier, is to accept that you are on a long timeline, and you just have to keep working. Eventually, maybe, you will be able to give yourself the confirmation you so want from others.

4. You Will Have To Define Success In Your Own Terms (Maybe For The First Time Ever)

School and jobs are really good ways to outsource self-esteem and responsibility. Education and career provide clear top-down paths with tangible measurements of progress — where you’re doing well and where you’ve fallen short. There is a sense of direction. I’m not ragging on this. Life is terrifyingly open-ended; pathways and tunnels are useful to minimize daily decision-making so you can focus on the tasks in front of you and quell some of that Big Life Dread in your gut.

Then that’s gone. You’re on your own. To be 32 and so undefined in work and career is scary, but now you have the opportunity to re-evaluate what it means to be successful, and what kind of work is worth doing. You can’t measure progress against the people around you who don’t share the same the baseline. You have to measure it against your own judgement, which means self-awareness about where you need your energy to go.

I used to think of success as a shiny thing handed to you by an external authority. A pat on the head or a shake of the hand. Outside of the system, it becomes a thing you have to come to terms with on your own, and this is an ongoing process. For myself, “success” now includes things like feeling present, rested and able to do good work; writing things that feel true; noticing other people and the world around me; putting myself out there in ways that feel low-key uncomfortable. The shitty thing about having standards is dealing with the discontent when you consistently fall short, and calling on reserves of forgiveness and tough love. You will need to measure yourself against your own internal bullshit meter. You will have to be very, very honest with yourself, and you won’t enjoy that.

5. YouWill Have To Take Care of Yourself Because You Are Your Most Important Resource

The regular rhythms and routine of steady full-time work provide a good way to check out of your head. But now you’re going to be spending a lot of time on your own. There is so much time to fill, and it’s easy for your screwy, scratchy head to fill it with self-sabotaging junk. And there’s no one to keep you on point, no one prompting you to finish and submit work. As a self-directed person, the most important resource you will have is your own capacity to be present, do good work, make decisions and plans, weather the inevitable uncertainty, and be self-aware enough to know what’s working, what isn’t, and what you can’t compromise on. Everything else proceeds from here.

And this internal reservoir is not something that just happens: it needs to be cultivated, carefully, over time, in the ways that make sense for you. There is the work, and it is non-negotiable, but there is also the work before the work. It’s invisible and easy to ignore, but boy it makes all the difference in the world.

The primary immediate benefit of drastic-feeling realignments is the resuscitation of a dormant sense of personal agency. This is what will sustain you. But it’s only the beginning. It’s best not to get romantic and attached about what “following your passion” looks like. Sitting frustrated in some office, you will inevitably daydream in great detail about what the perfect life looks like. But when reality knocks up against it, you will feel annoyed and scared, like the world is trying to crack your precious little china doll.

You’re dying to write this book of yours. Cool. Maybe you should, but maybe you would be better at turning it into articles instead, or a podcast, or a video series, or doing something else entirely, something that feels truer and more honest. You should probably be doing a whole bunch of stuff.  It’s the trade-off. You will have to go without a lot of things. You will be afraid and your life will look boring. But what you have is the chance, finally, to actually try.  What else could you want?

Conor Smyth is film editor at Irish culture rag The Thin Air. Like everyone else, he writes on Medium.