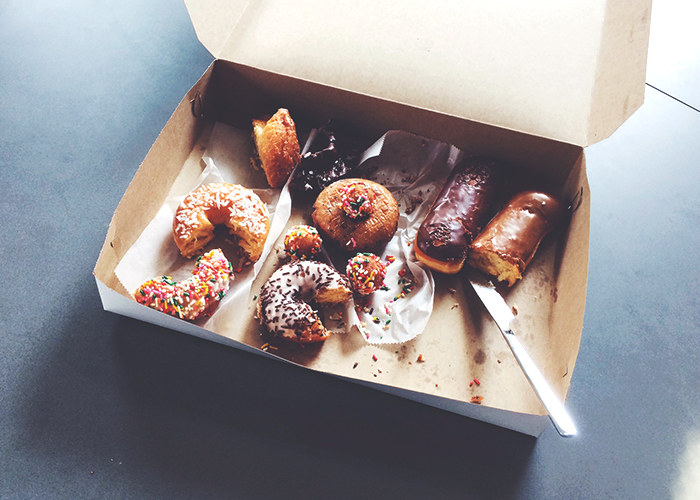 Any avid TDF-er already knows that I recently moved (because I truly haven’t shut up about it — sorry, I was v excited). What you don’t know (and, to be honest, what I didn’t even know) is how much it would end up costing me.

I knew that the move was going to cost me in a big way, because I was adding a pretty big expense (rent) into my life that I hadn’t previously had while living with my parents, and had knew there were also many life-things I’d need to acquire once I moved in. Although I had carefully budgeted and planned out how I would live post-move, I didn’t exactly consider how much money would be spent during the actual moving day (or in my case, moving week) itself.

Aside from the fact that I chose to move during the last week of December, which is already arguably one of the most expensive weeks of the year, I made a good amount of choices that led to a shit ton of overspending during the days leading up to (and the few days after) my move. Here were the biggest ones:

Drew and I have a few food-related goals for the new year, but the few days leading up to my move definitely weren’t a good example of what we hope to accomplish in the coming months. We’ve both been so busy and all over the place (him working, me packing, moving, and unpacking) that putting any focus on grocery shopping, meal planning, and cooking has felt sort of unimportant. I remedied this by buying a lot of random meals at random times and in random places. (I’ve eaten donuts for more than one meal this week.)

2. Buying replacement versions of things I left at one house while staying at the other.

Moving into the apartment where my boyfriend already resided meant that I had the luxury of moving my stuff in slowly over the course of a few weeks, rather than having to lug it all over there at once. This was objectively awesome, but it also meant that I often found myself at one of my homes without something I absolutely needed because it was currently living at the other home. Example: this post about my $4 skincare routine details a lil’ story from a few weeks back, when I accidentally left my face cleanser at Home #1 while spending the night with my boyfriend at Home #2. (If my face soap was more than $4/bar, I would be hurting a lot more about that — shout out to African black soap

.) But aside from just the soap incident, I also found myself without my toothbrush once or twice (prompting me to buy a few extras, which is actually never a bad idea if you travel between two places a lot), a hairbrush (prompting me to buy an extra, which, to be honest, I probably didn’t need), tampons (prompting me to buy a shit ton to stockpile at each home, because I definitely do need those), and even underwear (which I also needed to run out and buy asap, because your girl wasn’t about to go commando in jeans). The process of my move required a lot of planning depending on where I would be staying each night, and apparently I wasn’t able to do all of that successfully.

3. Buying things I didn’t think I needed (and therefore didn’t budget for) because my boyfriend already had them, that I’d deemed unacceptable one day into living with him.

Basically just all of his cookware. We are replacing it all. He doesn’t know this yet, as he is currently at work and I’ve made this decision today. Drew, if you’re reading this…we need new pots and pans

. Yours are pretty gross.

4. Spending a small fortune on alcohol.

Because the act of moving makes tons of beer feel very necessary, even though it is probably not. There have also been a lot of “celebrations” during the past week, some having to do with New Year’s Eve, but others dedicated to celebrating my ~big exciting move~. It is time for me to stop buying prosecco on the reg and treating it as an everyday essential.

5. Replacements for shit that I broke mid-move.

This isn’t a “moving expense” so much as it is a “Mary expense,” because I’m a natural disaster and I break things by just looking at them. I cannot stress the importance of bubble wrap when moving. The aforementioned solid amount of alcohol definitely didn’t help my clumsiness. This was mostly small stuff, like glass jars and cheap plastic hangers — but they add up.

6. A decent amount of extra gas driving back and forth between my new place and my parents’ because I keep forgetting things.

Exhibit A: I’m at my parents’ house right now while writing this, because a) I’m a terrible child and I missed them already, and b) I left a bunch of sweaters hanging on drying racks in the basement the day I moved. Oops. And now my gas light is on again. Sigh.

Here’s to next week being a little bit easier, and a lot less expensive!