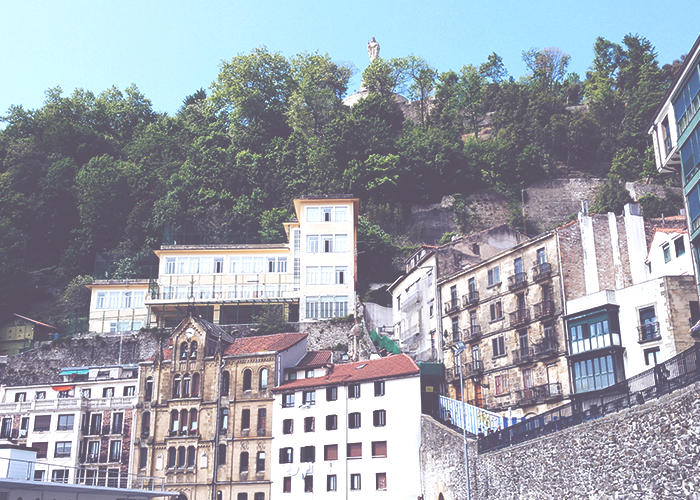 Last week, I read an article here on TFD about things American spend on that one European woman can’t understand. As an American from a suburban town in Maryland who has been living in Europe (first France, now Spain) for going on four years now, I have to admit that I found myself nodding along at nearly everything written in Gia’s article, but I also understood the scores of frustrated comments from Americans underneath. I know, first of all, that not all Americans live in the way the “McMansion suburbans” do, and that it can feel frustrating to be painted with that brush. But the truth is that a lot of us do live this way, and are raised to not question many of the things we consider necessary to our daily lives, and spending.

I am someone who was raised not in a McMansion, per se, but definitely in a green-lawned suburb where the pantry overflowed with pre-packaged foods to grab in our rush out the door, and bottles of water to drink whenever we were thirsty. I lived in central air that was freezing in summer, whether at work or school or the office, and I drove pretty much everywhere (including to the gym, where I would sit on a stationary bike). When I moved into my apartment in my medium-sized city, takeout was a frequent reality, and so was meeting at bars instead of at people’s houses. All of these things in Gia’s article rang true to me, and I know they were common if not universal for most of the people I know in America.

Now, I know that these things can feel like an unfair accusation if you didn’t live this way, but I also think it’s unfair to not accept and admit that many if not most Americans live this way (at least middle to upper-middle class ones), and that we could stand to cut back on some of the things we think we “need.” Part of our financial problems as a society stem from the fact that we don’t often question our way of life, or realize just how much of what we deem a necessity are actually luxuries. (For example, many people pointed out how AC is obligatory in America because it’s so much hotter than Europe, but first of all, where I live in Spain is just as hot as most of America in the summer, and that mentality is also dismissive of the many countries directly South of America where the weather is much hotter year-round and AC is still not universal. It’s all about mentality.)

And for me, the mentality really changed when I started living in Europe and confronting my lifestyle. There are a lot of things that I realized I no longer need, and it’s been amazing for my finances and my overall happiness to let go of them (or treat them as the luxuries they actually are). To give the American view of the debate, and hopefully inspire you to question some of the things that are taking up your budget, here are my 7 biggest things that I no longer need in Europe:

When I lived in America, like many women, I felt a pressure every day to look like the best version of myself, which in my mind translated to “made-up and perfect.” I wasn’t necessarily on the Instagram contouring-level of flawless, but I was definitely someone who did the full routine every day (foundation, mascara, bronzer, lipstick, eyeshadow, etc etc), and felt like I couldn’t be taken seriously or really feel beautiful if I didn’t. When I first moved to Europe, it took me a while to get used to the idea of being a more natural version of myself, and to pare down my morning routine to something more manageable. Now, I consider the times I put on foundation and bronzer and eyeliner to be special occasions. My daily routine is just a little mascara

, a little lipstick, and out the door. And I feel so much more comfortable in my skin, and and my overall “glow” is a million times better. Instead of just feeling beautiful when I’m dolled up and ugly when I’m not, I feel like myself at all times: imperfect but lovely, which is the beauty standard I have found most of Europe embraces.

This one has already been discussed at length, obviously, but here’s the bottom line: I live in Spain, it gets hot as hell, and I still get along just fine without AC. I promise you that I don’t melt, I don’t get heat stroke, and I am very much used to the feeling of being hot in the summer. The thing is, once you accept that that is what summer feels like, you come to embrace it in its own way and don’t mind it the way you used to. My summers are no longer a desperate search for AC, because I consider the feeling of “summer warmness” to be normal.

3. Meat with every meal.

Like many Americans, I used to think that meat was the “center” of my meal around which the rest of the dish would turn. I looked at it as not just my primary source of protein, but the focus of recipes and something that had to be included with nearly every lunch and dinner (and weekend breakfasts, because who doesn’t love sausage and bacon?). But now I have shifted my eating focus to a more balanced diet that’s much more focused on vegetables, grains, and starches as the vast majority of the meal, and meat as a more treasured treat. I’m by no means a vegetarian or vegan (I frequently eat eggs and dairy, much more so than meat), but I would say I eat meat with about four meals a week now, total. This means I buy much higher-quality meat, and eat it in smaller quantities. I look forward to the times I stop by the butcher to grab whatever looks good that day, and make myself a special dinner with it. It’s much better for my waistline, and my wallet.

This is probably cliché at this point, but living here has gotten me into cooking in a way

I never was in America. The biggest shift for me has been thinking in terms of ingredients, and not in terms of finished foods. I look at my cabinet and see what I have components for, and I go to the grocery store or market and look for the items on sale that I can get a ton of use out of in different recipes. When in America, I would either go for more prepared foods, or I would look up a recipe and shop specifically for that recipe, and often throw out the rest of the ingredients after a week or so because I had no clue what to do with them and wasn’t thinking in terms of the ingredients themselves. Now that I have switched to a from-scratch way of thinking, I treat my kitchen as something to be emptied and refilled, and recipes that I specifically go out of my way to buy everything for to be a more rare thing, like going to a restaurant.

I can’t believe how long I went paying for cable that I almost never used. At one point, I had like 700 channels, which just seems completely insane to me now. I know it may sound pretentious to be the person who “doesn’t watch TV” now, but it’s true that not having something to aimlessly flip through whenever I’m bored means I really look forward to the few things I do watch, and I find myself doing many more leisure activities that aren’t TV.

Before you get on me: I don’t live in the center of a city, and my most common form of transport is a bus, both of which I easily could have done when back in suburban Maryland. But when I was there, the solution of “car to get everywhere” was just the obvious one, and I thought it would be weird or sad to actually take the bus or bike

everywhere. Now, I generally do a combination of the two, depending on the weather. This means that I save an enormous amount of money every month on the expenses of owning a car, and I also have cut out my gym membership budget because my exercise comes from biking and walking a ton every day. And again, while I do live in a suburb adjacent to a city, I don’t live in the city itself. I’m not coming from a place that is impossible to recreate for most Americans. It’s just a question of mentality, and priorities. Yes, it would be occasionally more convenient to own a car, and some people in my neighborhood drive to work in the city every day, but I choose not to for financial, environmental, and health reasons. It’s completely a choice, but it’s one I didn’t consider making until I moved here.

Probably the biggest mental shift for me has gone from seeing a “house with a yard in the suburbs” as the ultimate goal of adult property ownership/living situation, to a wasteful thing. First of all, lawns are bad for the environment and commutes are bad for mental health. But beyond that, a house is more space than I need, and I am more than happy living in my current situation, which is a duplex with a little garden. (It’s why I moved to this outskirt in the first place.) But living here, I’ve realized that the trade-off of not having all the space or property I don’t use means that I’m a quick jaunt from museums, culture, and the vibrancy of a city, I don’t have a crazy commute, I’m not taking up more space than I need, and I’m making the most of everything I have. Ultimately, my goal is to buy a space similar to the one I have now (two-bedroom duplex with a garden), and if I ever expand to a bigger family in the future, I may upgrade to a three-bedroom max. But my goal is to always have just what I need, and to especially not create a huge commute in my life for work simply to have a giant green patch of land I claim as my own. It may be the American way for everyone I grew up with, but it’s not the way for me anymore.

Jessica is a 20-something living in Spain. She is taking a two-month hiatus from Instagram, which is very good for the soul.