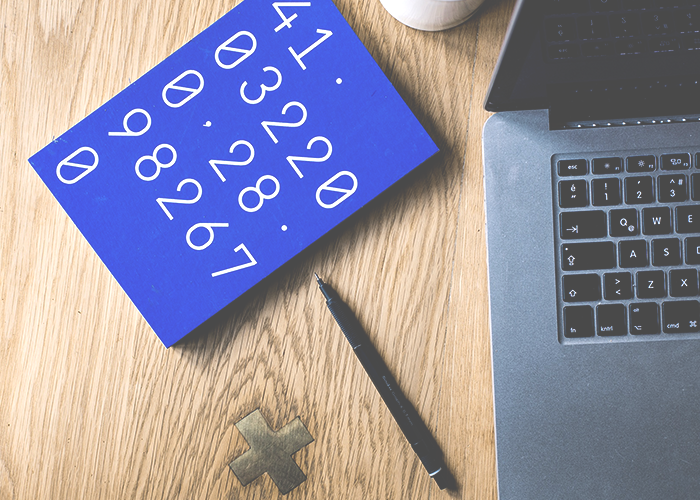 “I was working late at the office, and my boss creepily asked me to come over to his place to watch a movie with him one night — I froze. Two weeks later, I left the job; I just knew something was seriously off about him.” I remember a close girlfriend of mine dropping that bomb on me over brunch a few years back when we were in college, and it was the first time I had heard anything about sexual harassment happening IRL to someone I knew. Sexual harassment was always a vague part of some on-the-job training course I would take, but I never paid it much attention. I would also walk by posters outside the women’s center on my college campus, which would have statistics about harassment, but again, I never thought to look into more. It took a personal friend experiencing it for me to sit up, take notice, and realize what a huge problem it is.

Fast-forward to today, I’ve heard more than my fair share of inappropriate comments directed at other women and on occasion, myself. Some of them were very innocent but still uncalled for, while others were downright creepy. Comments about bringing the “good-looking girls” to a client holiday party, or promoting X individual to a client-facing role because she was “easy on the eyes,” were just a few I’ve heard. Nearly every woman I know has at least one example of an inappropriate or sexist comment they overheard at work.

Sexual harassment is still alive and well, despite the fact that there is so much awareness around the issue. Here are some very top-level statistics to help you understand the extent of the problem. 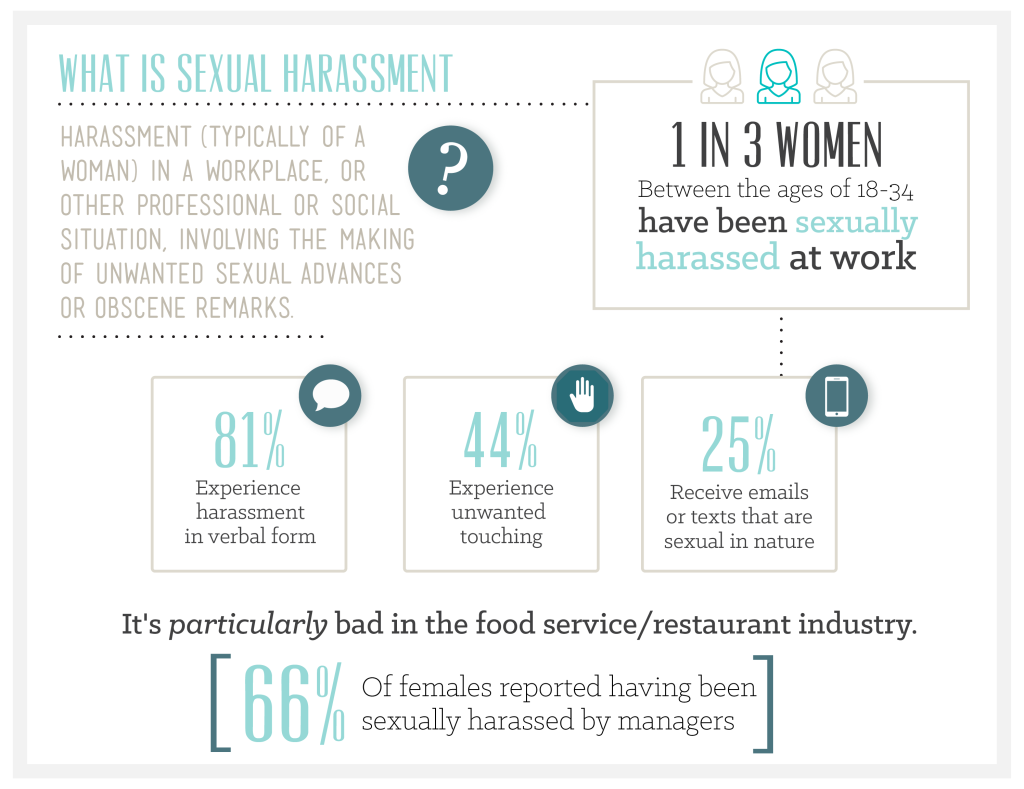 Below, I’ve rounded up seven horrifying-yet-totally-true stories about workplace sexual harassment that a variety of women experienced. These stories serve as a reminder that if you’ve had similar experiences, you aren’t alone, and it’s best to come forward with the truth if you can. If you want to remedy the situation, make sure you know your rights and know what steps to take to make sure it doesn’t happen again. Check out the nightmarish stories below.

1. I Was Sexually Harassed At An Informational Interview 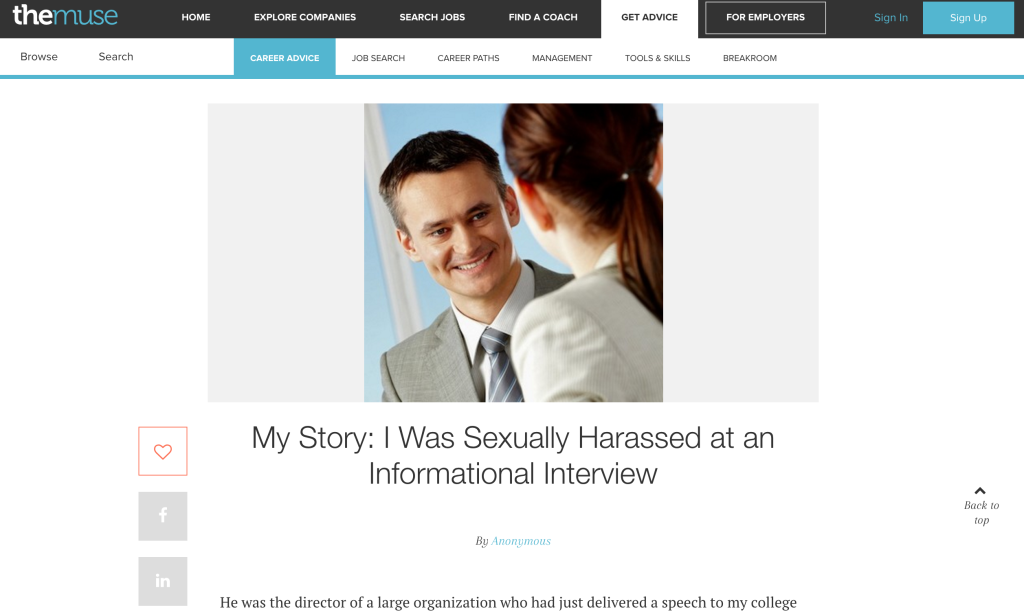 As if you didn’t have enough to worry about when going out for a new job, this article just made it way more stressful. One woman shares her experience of having to fend off a creepy hiring manager who a) sat next to (instead of across from) her during an interview, b) put his arm around her, and c) KISSED THE TOP OF HER HEAD as they parted ways. Just please go read this story, it’s unreal.

2. My Boss Sexually Harassed Me, And A Jury Awarded Me $18 Million 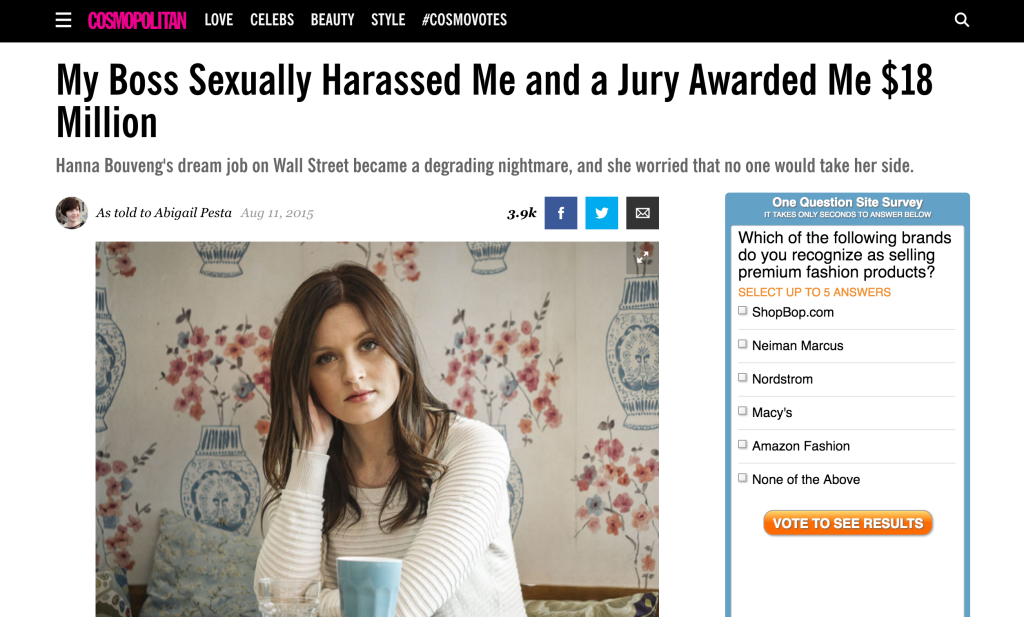 Hanna’s story is particularly devastating. She was a Swedish citizen who began working in NYC on a Visa, which was taken care of by her high-powered Wall Street executive boss (who turned out to be a monster). He knew he had power over her and her future, because he could fire her at any point, forcing her to lose her green card status. Hanna’s boss made a number of truly deplorable moves that made me feel nauseous as I read them. In one part of the story Hanna says, “After dinner, I was shocked to learn that he had booked one room for the two of us. I felt paralyzed. He started kissing me and tried to get me to have sex with him without a condom, saying he was ‘clean.’”  And while Hannah’s story, thankfully, is one that ends with a $3 million dollar settlement for her suffering, it’s important to remember that financial compensation like hers is rare.

3. I Was Sexually Harassed By My Boss 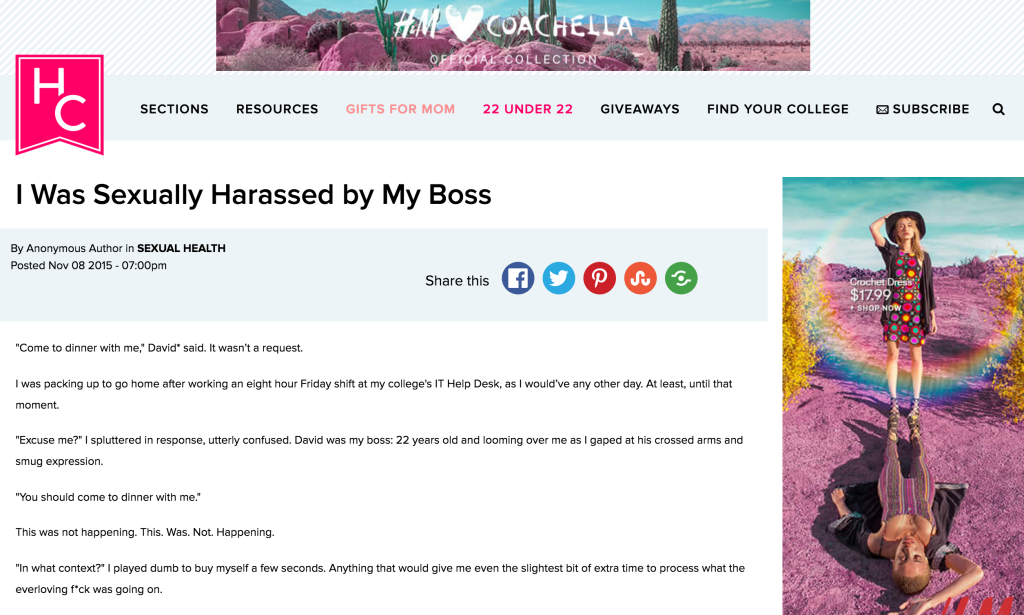 When your supervisor is not behaving appropriately, it’s difficult to confront, but impossible to ignore. One young woman shares the story of her boss who insisted they take things outside the office and hang out alone together. The woman was scared to mention anything to her coworkers, and she convinced herself the situation wasn’t that bad because he was so good at what he did. However, she learned that allowing the behavior to continue made things worse, and she couldn’t afford to ignore his behavior any more.

4.  IT HAPPENED TO ME: My Lecherous Boss Made Me His Executive Editor Because I Was 19 And Cute (And He Tried To Pay Me In Weed) 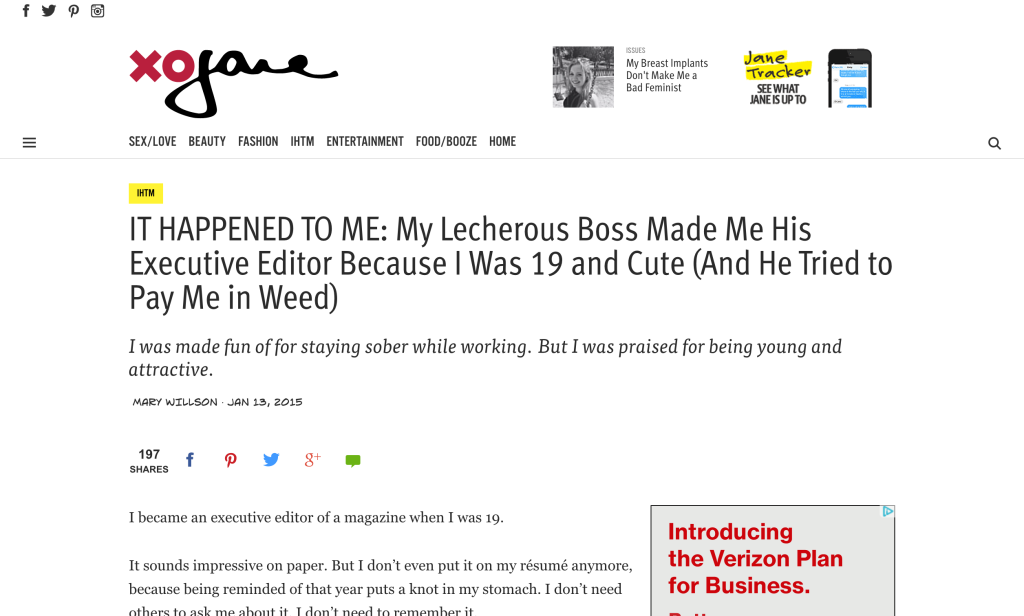 Hard to believe this story is true — I mean, trying to pay someone in weed?! Yikes. Just a brief intro to set up the kind of boss Mary had, she says, “He would later tell me he only hired women, because they’re ‘easier to work with.’ Then he would tell me he liked having me in the office because I was ‘easy to look at.’” Easier to work with, eh? That comment is only the beginning of this insane story of a young woman who was taken advantage of because she was working at what she considered to be her “dream job,” and she didn’t want to screw up the opportunity. Even when office working sessions included a bottle of whiskey, weed cupcakes, and joints, Mary felt like she couldn’t give up and become a “failure” for quitting.

5. Supervisor Sexually Harassed Me At Work. I Made A Complaint To My boss, And He Told Me That I’m Hurting My Supervisor’s Feelings By complaining — He Wants To Fire Me. 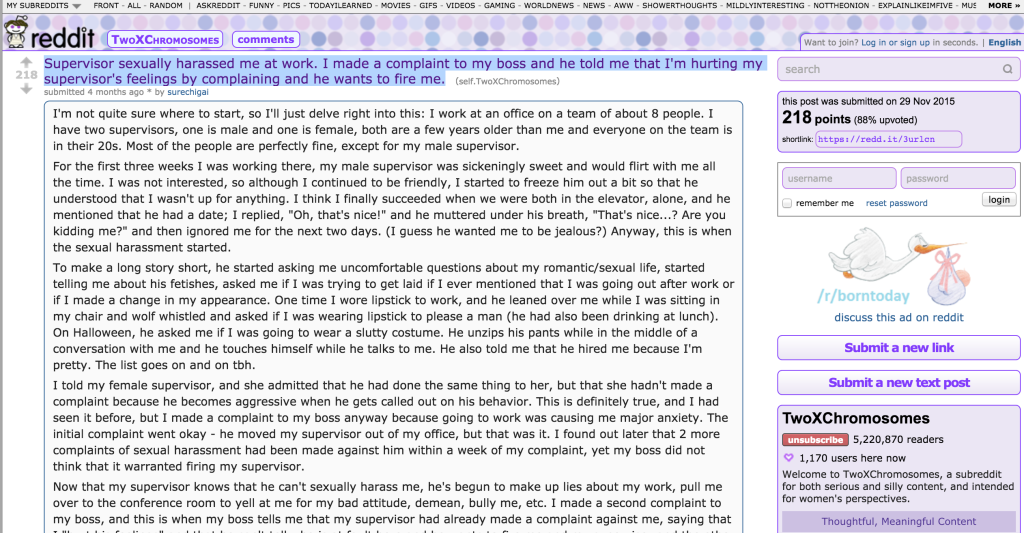 I came across this Reddit thread on r/personalfinance the other day, which was truly shocking. One woman writes about a very common issue among women who are sexually harassed — not wanting to speak up about their experience, because they don’t want to upset anyone (or worse, get fired). The author mentions just a few of the wildly inappropriate things her boss said and did to her saying, “One time I wore lipstick to work, and he leaned over me while I was sitting in my chair and wolf whistled and asked if I was wearing lipstick to please a man (he had also been drinking at lunch). On Halloween, he asked me if I was going to wear a slutty costume. He unzips his pants while in the middle of a conversation with me and he touches himself while he talks to me. He also told me that he hired me because I’m pretty.” I can’t imagine experiencing that degree of sexual harassment. No one should have to live in fear of coming forward to address the issue, because they anticipate such harsh retribution.

6. I Was Forced To Have Sex With My Boss For Positive Performance Reviews

This story is honestly too much. Being forced to have sex for the sake of positive performance reviews sounds like the lowest possible rung a guy could stoop to. The situation involved Dr. David Zagzag, an NYU doctor, and Dr. Irina Mikolaenko. According to the article, the complaint was brought to trial, and the details of the claim say, “Zagzag — whose wife is a registered nurse — repeatedly forced Mikolaenko to engage in sex, sometimes in her office, according to the suit. On one occasion, he lured Mikolaenko to the hospital’s lab for sex, knowing that the technicians had already left for the afternoon.” A truly nightmarish situation that I can only hope happens to as few people as possible, because the effects are devastating.

7. My Boss Sexually Harassed Me At The Work Christmas Party

The young woman explained her situation saying, “At last year’s Christmas party he asked if I was having enough sex and told me I look frigid.” This article was a really useful read, because it not only presented what happened to the young women, but it provided step-by-step advice for what she should do next. It’s not enough to simply hear endless stories of sexual harassment, and it’s important that we spread the word about how to handle it, and recover from an experience like it.