7 Professionals On What Actually Happened When They Got Fired 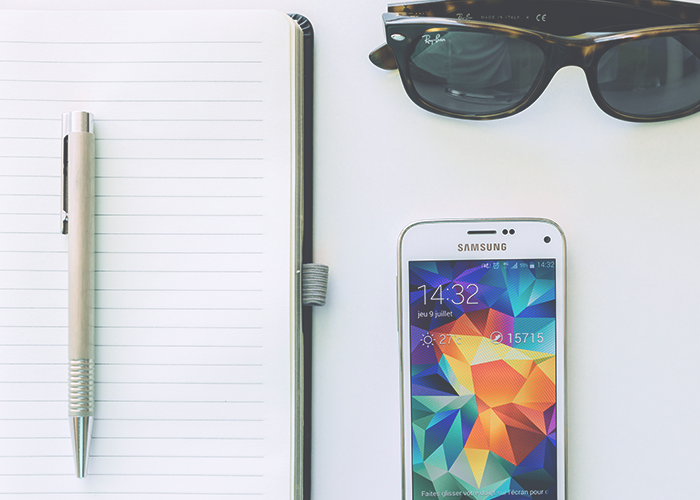 Getting fired is one of the Great Fears of nearly every working professional I know. The experience is one that dredges up an array of emotions: guilt, fear, anger, confusion, and sadness, to name a few. People from every field have written about what it’s like to get fired, and just reading their vivid stories makes me feel like I, too, was in the room the day they found out they lost their job. The experience seems jarring, and yet, so many people go through it at least once in their careers. In fact, according to this website that offers stats on the American workplace, “An average of 57,887 people have been laid off or fired each day (including weekends and holidays) in 2015.” That’s just last year alone.

Getting fired doesn’t have to mean the death of your career or complete loss of confidence in yourself. In fact, a lot of people say they turn their otherwise-crappy situation into something positive. There are also a ton of articles online that chronicle the career paths of the rich and famous who were fired, and who went on to (much) bigger and better things. (<– That always makes me feel better.) Experts say that there are a number of tangible steps one should take immediately after they get fired (great articles on that here, here, and here.) These steps include: retooling your resume, job hunting, networking, brainstorming goals, and drawing up a short and long-term plan for yourself.

If you’ve even been fired, leave a comment in the section below to share how you dealt with it, and what you did next. The more we talk openly about the ways in which we recovered, the better off everyone will be as a result of the shared wisdom. Below, I’ve rounded up seven stories of people who got fired from their jobs, and what they did next to get their life back on track. For some people, it meant starting their own business so they would never have to be fired again, and for others, it meant pursuing a dream they had previously been afraid of. Read on below for inspiration and tips!

1. Why Getting Fired Was The Best Thing To Happen To My Career 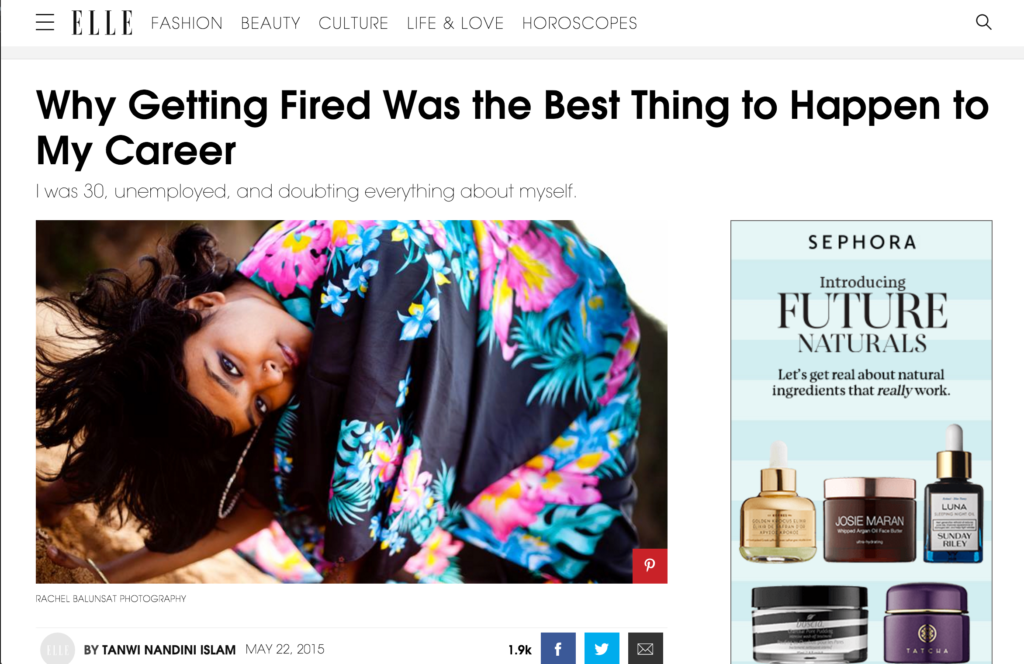 Tanwi Nandini Islam talks about her experience getting fired from a job she loved right after her 30th birthday — a time in her life when she previously believed she would have had all of her shit together. She talks about how she was able to spin the devastating situation into something positive, and capitalized on the wake-up call she was given, and uses it to pursue her dreams, travel, and write with abandon. She says, “Outsider, impostor, unworthy, not enough–this is what we tell ourselves when we struggle in the workplace. Despite the years I’ve put into my writing, whenever I experience rejection, I question my authenticity. That part never goes away. Each day is a new lesson in something I’ve probably never done before.” It’s a fantastic read that shows strength and determination to make the absolute best of something crappy.

2. Moving On: How I Found Happiness After Getting Fired 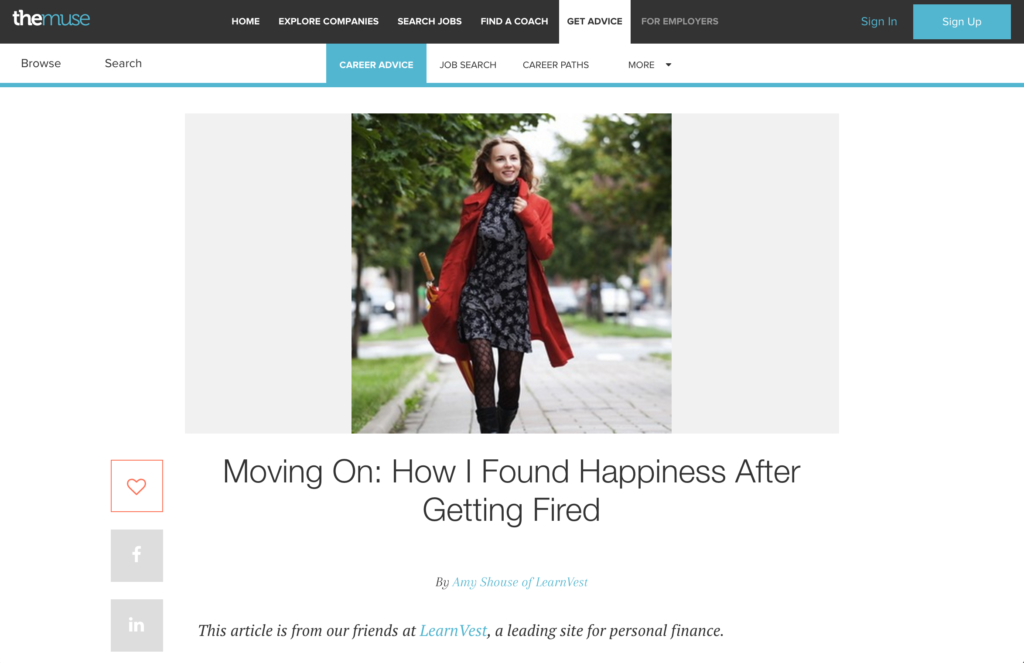 Amy Shouse talks candidly about her expeirience getting fired from a job that she knew was going nowhere. (In fact, she half expects it, and ends up having nothing at all to pack up on the day she gets let go.) She discusses, with great detail, how she picked herself up post-firing ,and worked harder and more passionately than she ever had before. She lays out her five-point strategy for how she moved forward after getting fired. One of those strategies was creating a daily rule to do five things. She writes, “Do at least five things daily that will work toward securing your dream job. If you don’t know what your dream job is, do five things that feel momentum-creating, such as research, calls, book store or library trips—actions that keep new energy flowing.”

3. Getting Laid Off From My Six-Figure Job Was Exactly What I Needed 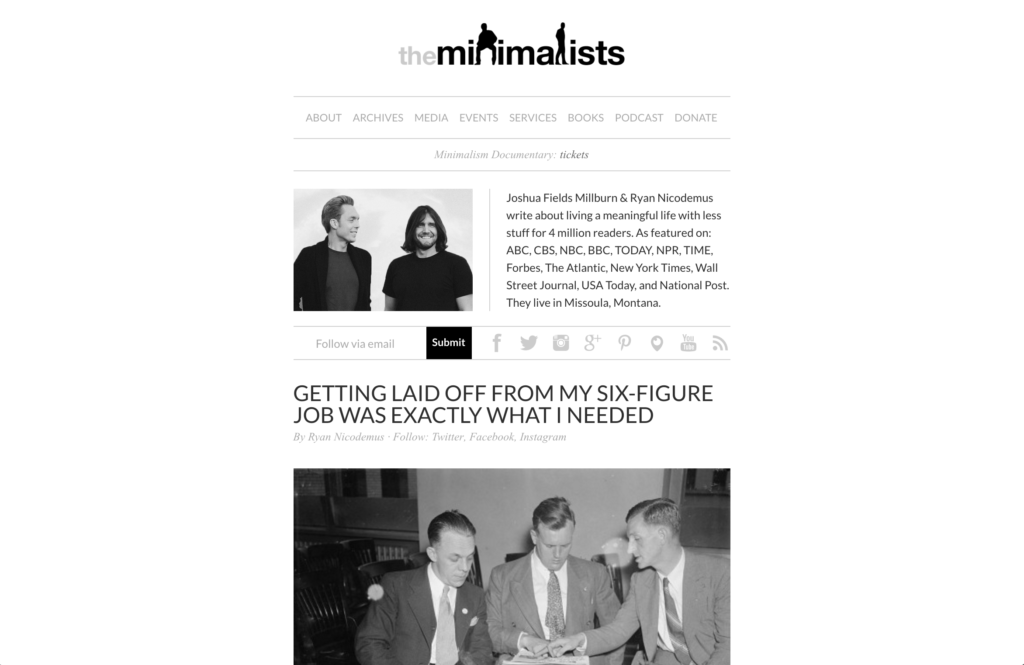 It’s definitely not fun to get fired from a job, let alone getting fired from a job with a comfortable six-figure salary. Ryan Nicodemus talks about getting fired from his corporate job, and it’s not the reaction you would expect. He said he felt “genuinely thrilled” to be fired saying, “It was as if a gigantic weight had been lifted off my shoulders. I knew it was time for me to move on, and this was the nudge I needed to jump off Corporate America’s cliff…umm, I mean ladder.”  Ryan, along with his friend Joshua Fields, began a mission which they chronicle on their website The Minimalists. Check out the story in-full to see what happened next.

4. How Getting Fired Gave Me the Freedom To Start My Own Business 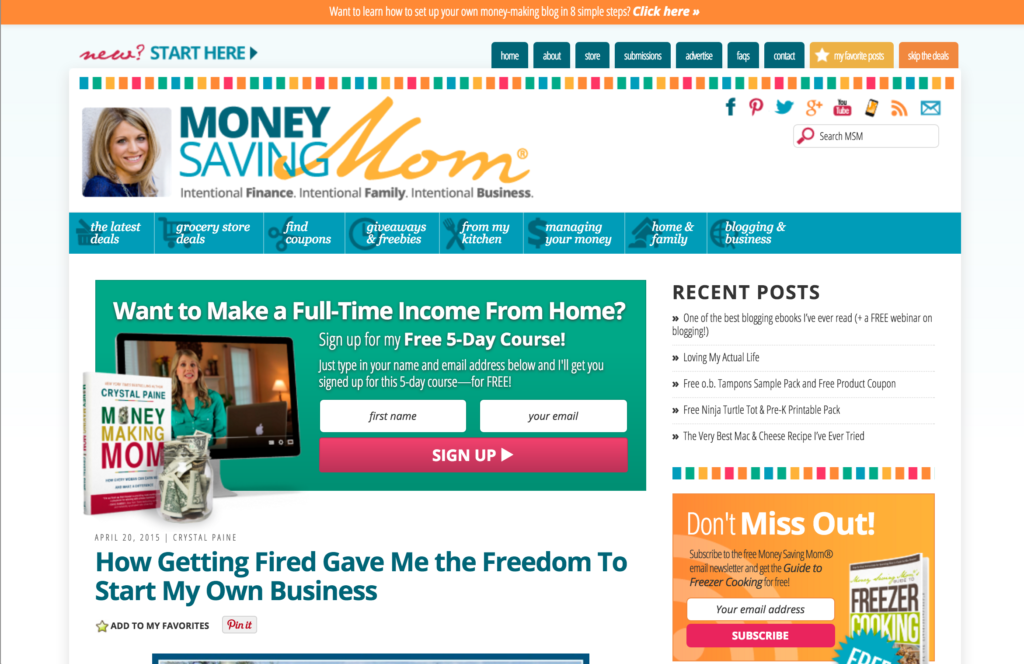 This is a crazy story of a woman who was fired in the worst possible way — by getting personally attacked for her work ethic and working style. Crystal Paine describes her experience, saying, “I was called into a conference room to meet with three managers (I’ll call them Randi, Candi, and Mandi). There was a huge stack of paper that had printouts of my Internet activity and screenshots of my activity were displayed on a TV. I definitely deserved to be fired, but they also chose to attack me personally. They told me I was trash, called me horrible names, and they even went so far as to say I shouldn’t have children because I had no morals.” Crystal goes on to talk about what she did next, and how she turned her career around to start her own proofreading business called Proofread Anywhere. Check out the article in-full to read about how much $$$ she made moving forward.

5. Why Getting Fired From My First Job Was The Best Thing To Happen To Me 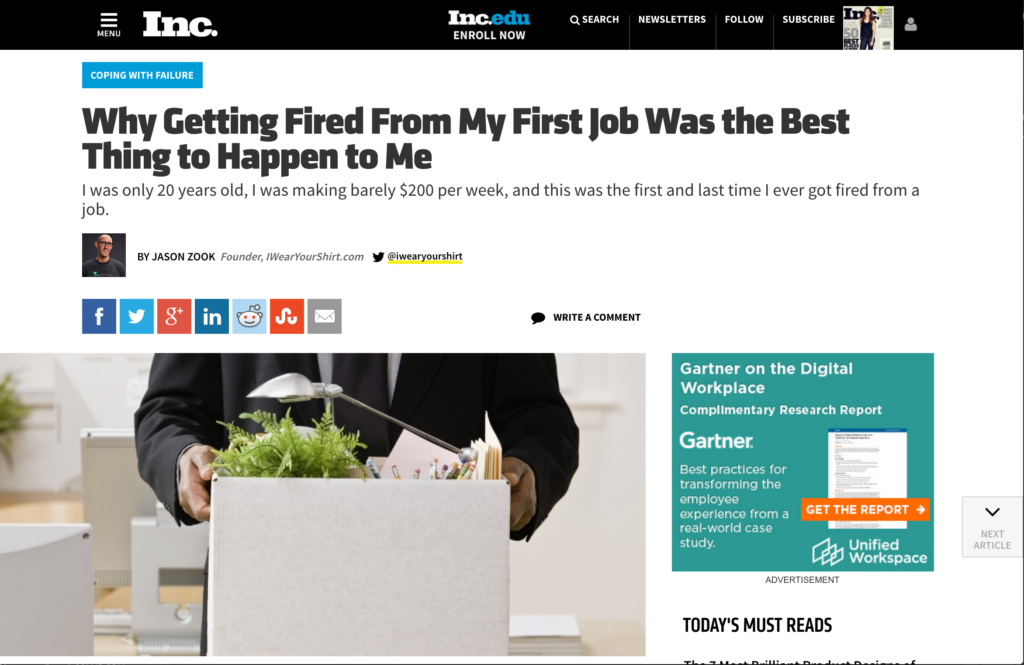 Jason Zook writes about his experience getting fired from an internship when he was 20-years-old working as a part-time graphic designer. He says that in the moment he was fired, he vowed that he would never feel that way again. He writes that the experience taught him incredibly valuable lessons about flexibility, work, and his personal values, and he says he would never have had the career he has today without having gone through that experience. Jason writes, “We’ve all felt this way. Like there’s only one path. Like there’s only one “right” way to do something. But what I’ve learned over the years is that there are more paths than we think, and it’s up to us to invent our own path when the one laid out in front of us doesn’t feel right.”

6. What Getting Fired From My Dream Job Taught Me About Life 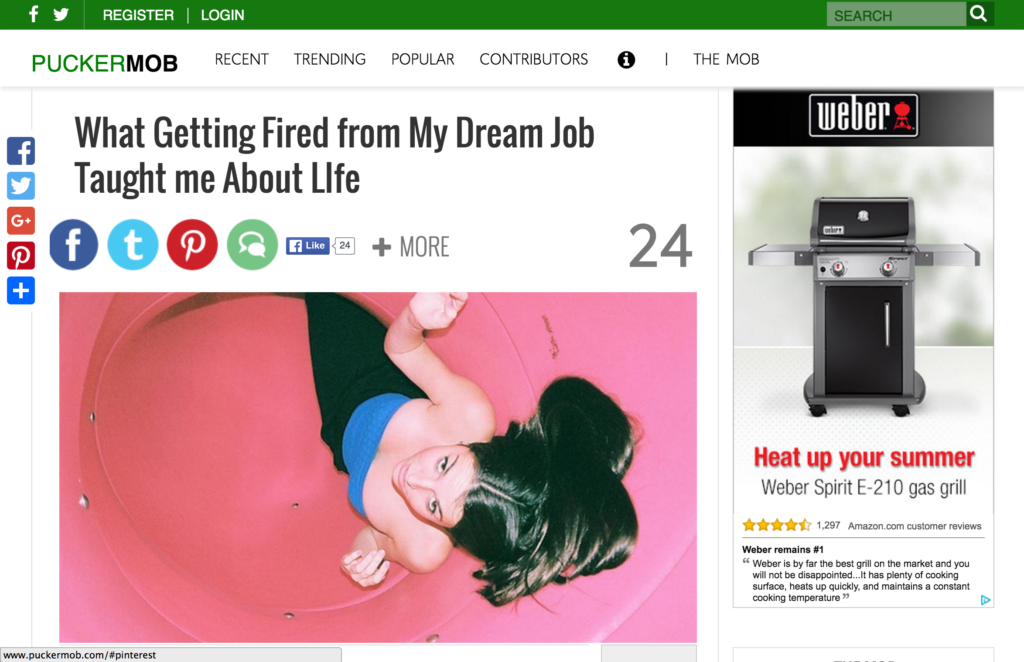 Kristen Corey’s situation is like so many others I’ve read about — she gets fired out of nowhere, and never sees it coming. She had been working in the NYC publishing industry for nine months after graduation, and said that she worked her ass off at the job. However, she knew she didn’t really enjoy it, and didn’t want to admit it to herself. Kristen’s says that if she was never fired from that job, she would have wasted years there doing something that she wasn’t into simply because it felt safe and comfortable. Read the article in-full to see what Kristen learned about life, and where her career took her next.

7.  Why Getting Fired From My Dream Job Was The Best Thing For Me 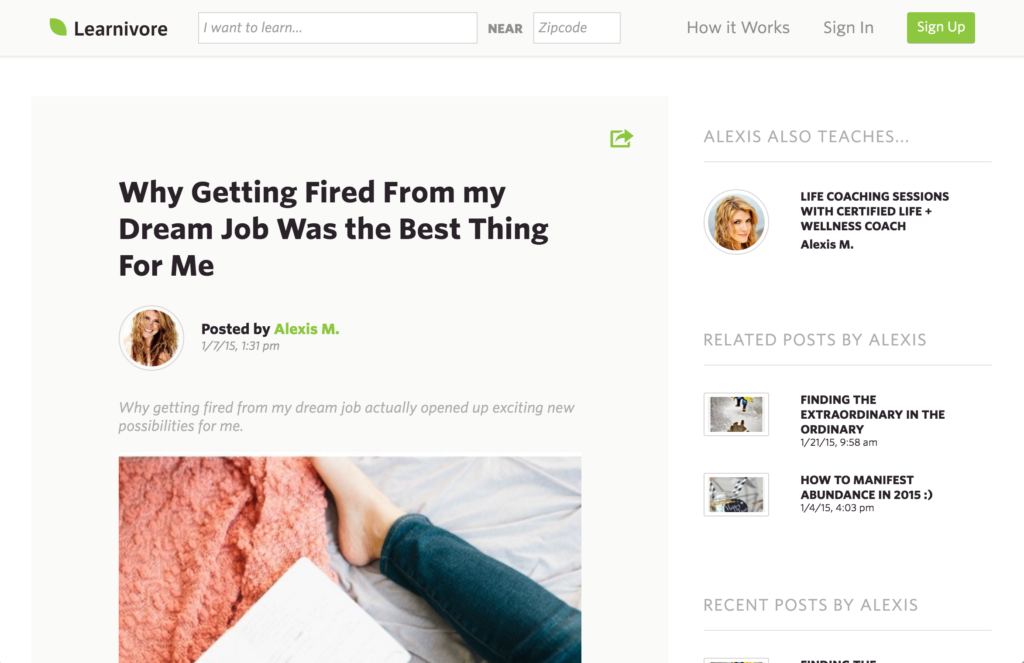 In this article, Alexis talks about her experience across a number of years where she went back to school to pursue a dream, failed, moved far away, took risks, fell in and out of love, and got fired. In the midst of her darkest moments, she pursued her dreams and followed her personal journey toward self-love and self-care. Alexis says, “I realized that my original deep desire to heal the environment wasn’t shattered, but that the best place to start was through my own self-healing and helping others self-heal.” Alexis talks about how she created a website called Crazy Wild Love, which connects hundreds of women who empower and push one another forward. Alexis now works as a full-time life coach, writer, and dating/relationship mentor. Read her story in-full for the details of how she turned her life around after a string of unfortunate events.