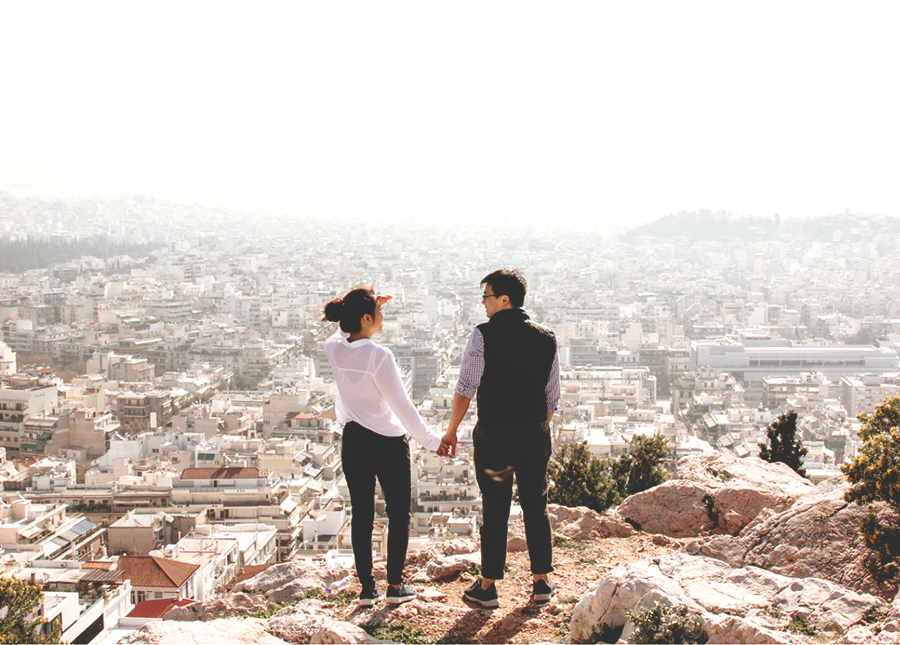 I’ve been dating my boyfriend, Peter, for about two and a half years now. We just moved into our second apartment together, and for the first time for both of us, we have a guest bedroom. That necessitated spending quite a big chunk of money on a new bed, mattress, sheets, etc. We also used a significant part of our leftover moving budget (and then some) to update our existing living room furniture (which made me personally very happy because much as I love him, Peter’s post-collegiate furniture taste was uh utilitarian at best). We still need to invest in three air conditioners for the space.

Needless to say, we’ve been spending a lot of money, and a lot of it basically all at one time. And though we have our squabbles like any couple, I must say, being on the same page for everything in regards to spending has been crucial for making the transition easier. It’s always been very important to me to invest in my home, and I’m not sure I’d be happy in a relationship where the other person didn’t at least understand that value, even if they didn’t outright share it. (We’re not by any means buying designer furniture, but doing any sort of home decor project is going to take some money, especially when you’re starting from scratch.)

This is my first long-term relationship, so I don’t have anyone to compare it to — but I can tell how much of a strain it’d be if we weren’t on the same page when it comes to money. In any relationship, I think it’s so important to have similar money values and goals in order to make it work long-term, and work hard to be understanding if you can’t spend the same amount in the short term. I know money is a pain point in so many relationships — and money can even bring up problems that sometimes aren’t fundamentally financial.

To that end, I reached out to the greater TFD community to hear about readers’ worst fights they’d ever had about money as a couple. It was eye-opening, to say the least, and can hopefully provide a bit of perspective (and catharsis) to anyone who’s had their own share of money-related arguments in their relationship. Here’s what they all had to say.

1. “Usually our money squabbles are fairly minor and almost jokes at this point because we just have very different instincts on what’s worth a splurge (for me, overpriced dinners and drinks with friends; for him, going to shows and movies, or new toys like a fancy guitar or speakers) and both of us can get annoyed at the other for these expenditures. But I wouldn’t say those were ‘fights.’ The only time I really upset him is when he wanted to loan money to a family member by taking out a loan rather than using his savings, and I argued against it because I think it’s always better to avoid debt. But ultimately it wasn’t my money and thus not really my place, so I accepted that and we moved on.” – Ashley

2. “A former partner pressured me for months to take a trip to Okinawa with her after we had already been to Japan twice. I refused. It would have cost at least twice our monthly expenditures, and I was building my emergency fund at that time. While I am not opposed to traveling at all, such an expensive trip was completely inconsistent with the budget I had committed to for the first years of my working life. Unfortunately, she bragged to her parents about our ‘plans’ and when I corrected her, I must have come across like a penny-pinching killjoy. In retrospect, I am glad I didn’t give in. My ex has vanished from my life but my emergency fund is still there.” – Christine

3. “So basically I met this guy at a friend’s concert and we had a whirlwind weekend where we went on these long, romantic dates and only ever kissed but clearly left on a note of ‘to be continued.’ So because I am a complete idiot, I agreed for him to fly out to stay with me in the house I shared with three roommates for TWO FUCKING WEEKS. On essentially day two it was clear that we were a total mismatch and it was a huge mistake, but I wasn’t about to literally force him to be on the street for the remainder of the trip. But the awkward thing was that I had, like, $80 in my checking account and he came from a lot of money and expected me to be like ‘showing him around,’ and was so verbally abusive and terrible that I literally went into debt while he was there doing whatever he wanted socially so he wouldn’t deride me for being poor and embarrassing again. I distinctly remember us getting burgers at a Whole Foods counter one day and me being utterly panicked that I wouldn’t have the $16 in my checking account to cover it, or that I would run out of gas on the highway and not be able to get us home because I couldn’t afford to put enough in the tank. The entire affair was a fucking nightmare and above all it taught me not to invite men you don’t know to your house for two weeks with no alternative, but secondly, it taught me that people who shame you about money are fucking Satanic and should never, ever be dated.” – Dana

4. “I had my worst money-related fight(s) with my ex-girlfriend. She was terrible with money, and whenever I brought it up (because at the time we thought about moving in together), she started getting angry and defensive and told me ‘only rich people talked about money’ and she grew up poor and ‘what did I know.’ At the time she earned the same money I earned and had fewer expenses — but somehow she was never able to save anything. One time she yelled at me that I was behaving like ‘a rich kid,’ and I realized how deeply she must have hated to have any money herself, and maybe that was the reason why she never managed to save anything. I also realized that I wouldn’t be able to share my life with someone who a) kept yelling at me and b) kept treating money like something inherently evil and was not at all prepared to change.” – Victoria

5. “The worst money fight I ever got in with my ex was right after we moved in together. He offered to support me while I was in school (he had a really good job), but I insisted on paying my fair share (I was also working full-time). It would have been easy to let him pay for our living expenses, but I didn’t want to feel dependent on him.” – Heather

6. “My partner didn’t let me know she spent her tax refund frivolously, even though we had agreed to save our refunds for a vacation. We have huge income disparity — I’m a communications director and she’s a server — so it definitely tore a hole in our relationship and caused financial stress.” – Eva

7. “My ex-girlfriend and I decided to go out to dinner one night, and we both looked at a bunch of places and agreed on one. When the time came for the check, I asked her if she wanted to split it. She agreed but once we left, she got visibly upset — it turns out she wasn’t really in a position to split the bill for a dinner out, but didn’t want to make things awkward, so just agreed to it out of hand. I obviously felt badly and offered to repay her, but she refused. As it turns out, the money wasn’t really the issue so much as my not realizing that she couldn’t afford it.” – Steven

8. “I recently moved in with my boyfriend and his roommates. When his roommate asked me for my part of the security deposit, the deposit was literally $300 more than my boyfriend had told me it would be. When I went to him to ask WTF, he was like, ‘I absolutely did not give you that number, why would I have done that?’ And I had to dig up the text messages to prove it, and he had literally no idea why he’d given me a lower number. Then we had to have a long conversation about what was fair for me to pay, and if he should contribute, because I’d planned for a lower amount.” – Christopher