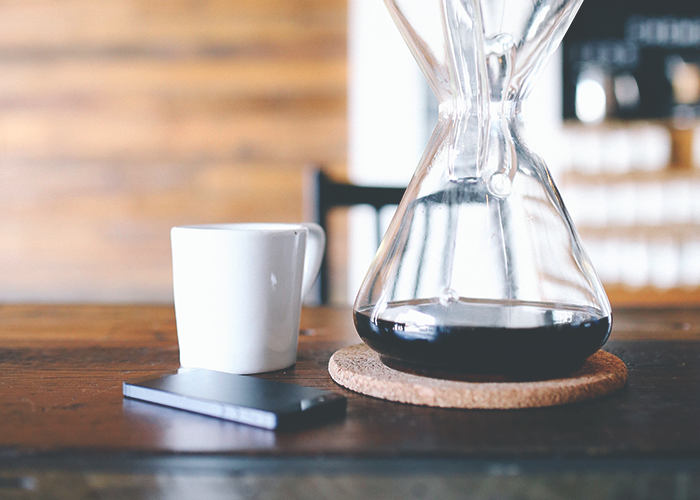 Paying back debt — no matter if it’s credit card debt, student debt, a big mortgage, medical debt, or repaying a very unexpected expense — is never an easy task. And, when it’s six figures of debt, the journey to pay it back can seem truly life-altering. I’m married to someone who graduated from college with six figures of student debt, and I’m intimately familiar with the way it impacts life and the tradeoffs we’re forced to make to accommodate it. Some people fall into debt by accident, while some people chose to strap themselves with it as an investment for something greater. Whatever the story looks like, to getting to the point of having six-figures of debt, the repayment process looks roughly the same: patience, lots of time, determination, and consistency.

I rounded up nine stories of 20-somethings who are repaying various forms of extreme debt that spills into the six figures, and what paying back that debt means for their lives. Check it out below! 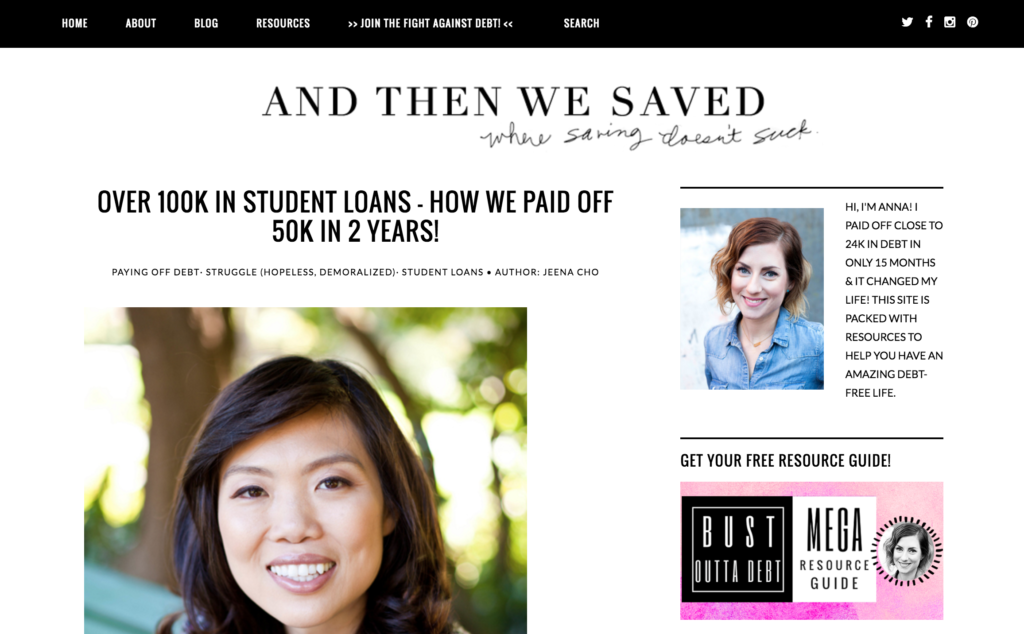 Jeena Choy shares her story with repaying 100k in student debt, which she accrued after going to law school. She walks us through how her and her husband were able to pay off the first half, roughly 50k of student loans, in two years, which is a pretty amazing feat. She says she was able to do it once she finally got into the ~zone~. She says, “The most difficult part of getting out of debt is changing your mindset. Once we changed our mindset from ‘we need nice things now’ to ‘we need to get out of debt’ it was easy to change our habits.” Check out the story in full to read exactly how her and her husband did it. 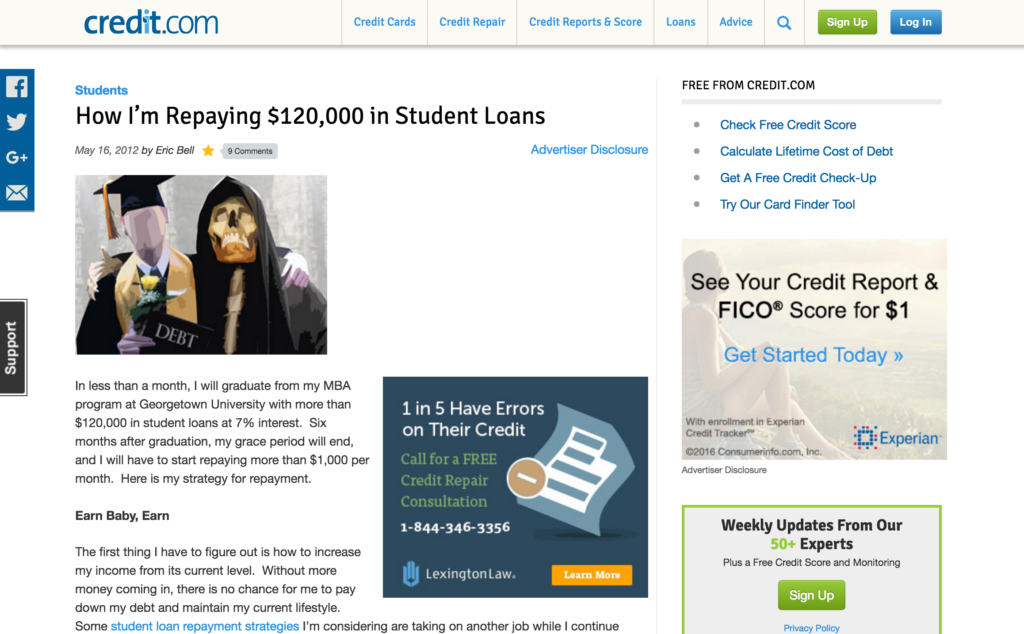 After graduating from Georgetown University with 120k in student loans, Eric is forced to map out a detailed strategy for how he’s going to pay back his loans and make monthly payments of (gasp) $1,000. He expands upon his thought process behind why he wants to get himself out of debt quickly, saying, “Debt repayment requires discipline and sacrifice. While I want to take bonuses and gifts and buy fun stuff, I simply cannot. The top priority after graduation is to eliminate my student loan debt as quickly as possible. In the past, my priority was building up my emergency savings fund. My new goal is to repay my debt. The choice is simple.” It’s interesting for me to read through Eric’s plan, and I think it can offer a lot of useful advice to people looking for help. 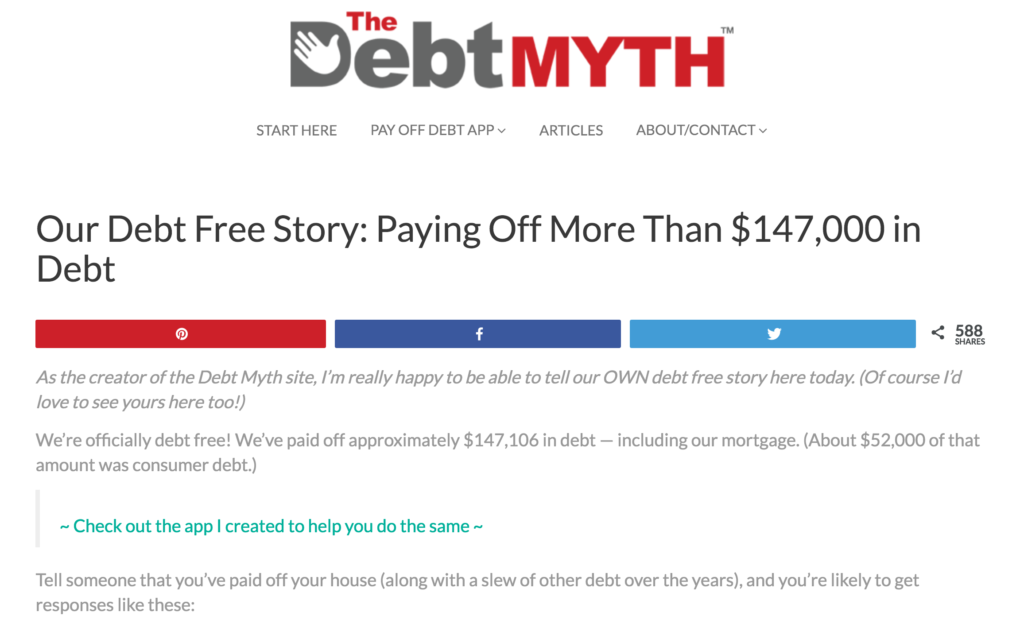 This article is a write-up about debt repayment from the founders of the site The Debt Myth. It’s a husband and wife team, and they talk about how they were able to pay off more than $147,000 of debt (1/2 mortgage debt, 1/2 consumer debt) between the two of them. They talk about how it’s essential to be hard on yourself and (and brutally honest) about the stuff you can and cannot afford. They drive home the need to get ahead of debt, so it doesn’t consume your life, saying, “You CAN get by (and AHEAD) without using debt by saving up money for emergencies, planning for regular and irregular expenses, saying no until you’ve got the money for stuff you want, and getting creative about what you do spend money on. That’s how you do it, and how we did it.” It’s a really inspiring story, so read it in full for yourself. 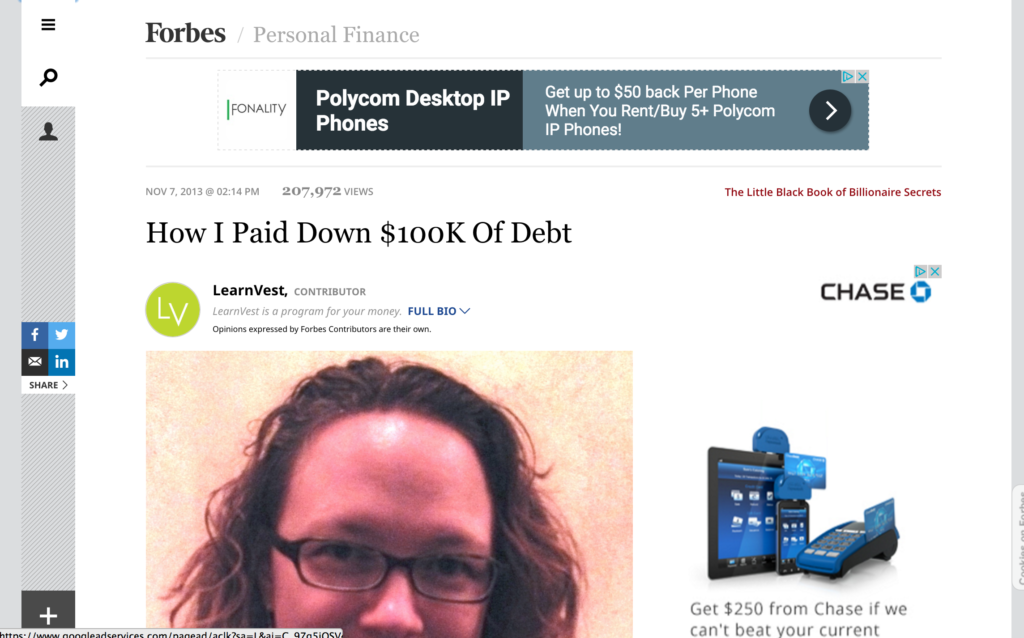 Catherine talks about how she fell into just over 100k of debt after a combination of unfortunate life decisions. She talks about the areas where she took out too much money, on school loans and credit cards, and how a lot of these small bad choices added up. She comments on the effect  her weight and health had on her finances, saying, “I smoked, drank too much and gained weight. On top of that, I found myself in a bad marriage (I had even paid for the $8,000 wedding on my credit card). I paid my $1,200 attorney fee for the divorce with a credit card, too. But what difference did another thousand dollars make?” It’s interesting to read how small payments such as $1,200 start to feel insignificant once you’re already in trouble (similar to how it’s easy to say “fuck it” to your diet when you’ve already had a bad cheat day). Catherine ends up coming out the other side, so be sure to read how she does it. 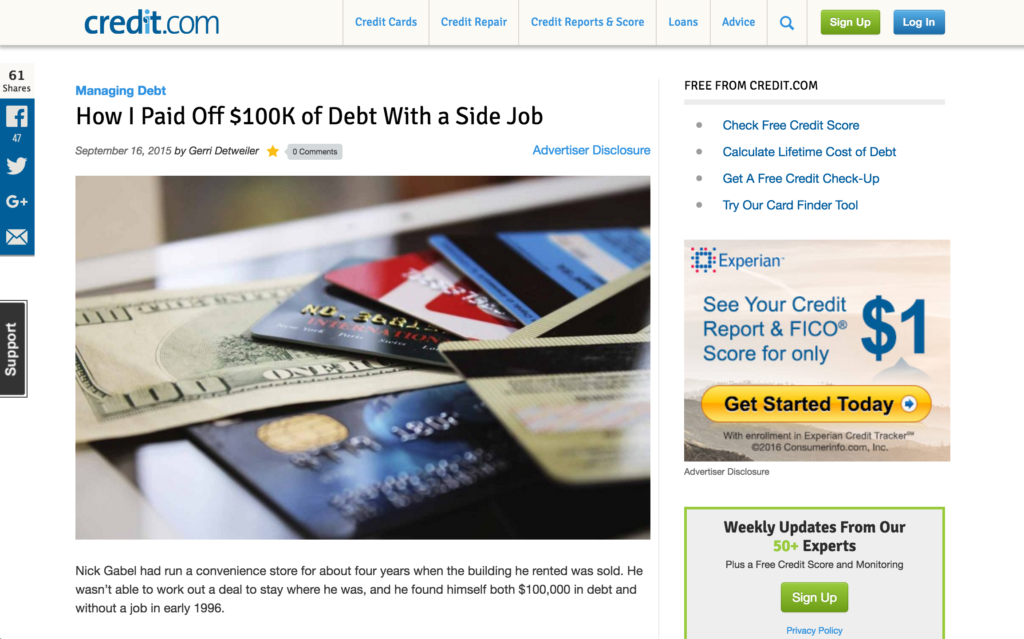 Nick explains how he worked his ass off at a second job to help pay down six figures of debt. Nick offers a lot of insight into how he was able to do it, but explains the three steps that helped him the most, saying, “Be aggressive, to automate it when you can, and to use windfalls wisely.” He expands upon it further in the article, explaining how he utilized the snowball method, so check it out for yourself to read how. 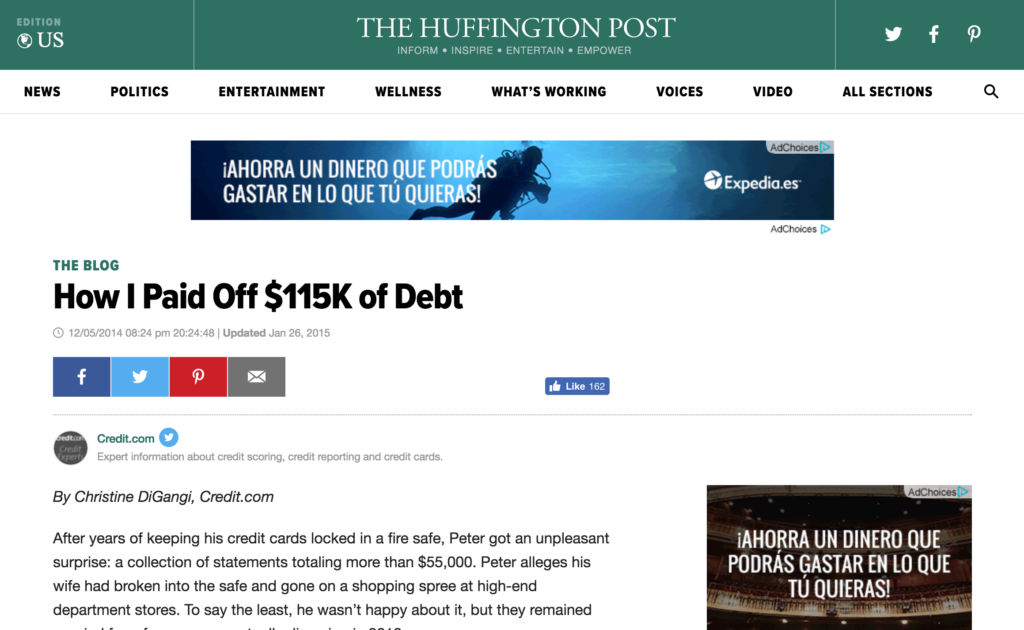 After Peter’s* wife goes on an all out shopping spree, with receipts totaling upwards of 55k (YIKES), he had to start rebuilding the health of his finances. But, that was just the start of it. Peter and his wife proceed to get divorced and he is roped into paying 60k worth of lawyers fees. The article goes on to explain exactly what Peter did to get himself out of debt in roughly two years, and the financial lessons he’s learned from the experience. SPOILER ALERT: he’s going to keep his credit cards under lock and key until the end of his days.

7. How Alice and Scott Paid Off Nearly 200k Of Student Debt 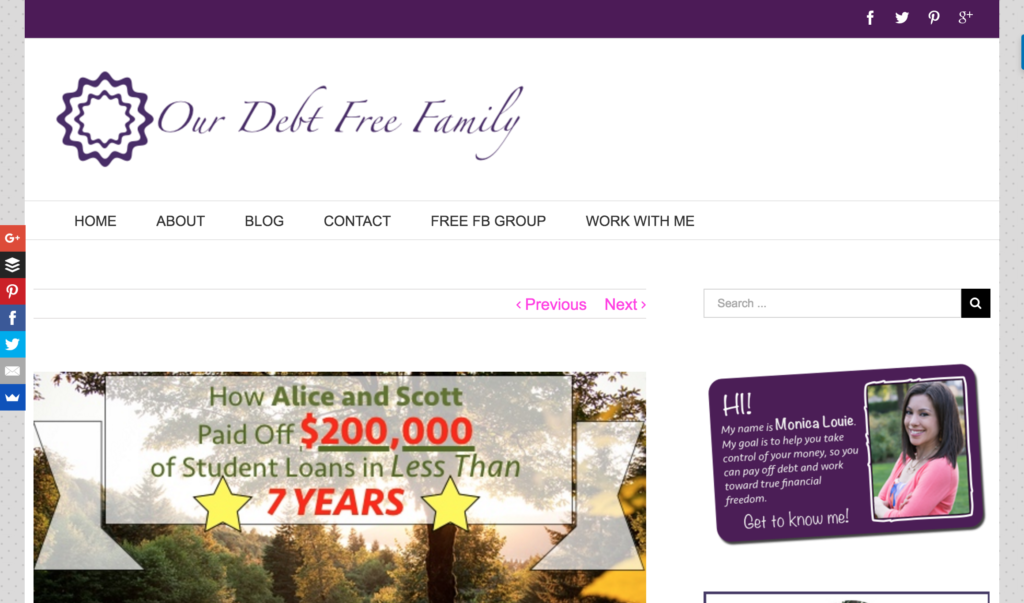 Another student-debt specific story of how a couple paid back a whopping 200k in under seven years. It’s a neat Q&A type of post, which is useful when getting details into their repayment strategy, their emotional response to their debt, and what sacrifices they made to reach that goal. One of Alice’s money saving tips is similar to one that Chelsea and I have talked about on TFD before. Alice talks about saving, and recommends, “automatically put a percentage of your paycheck into a separate account that you know you won’t touch so you never see that money to begin with. Then you won’t have the urge to spend it, and you can use it for your next financial goal.” Sounds familiar! Check out the full story here. 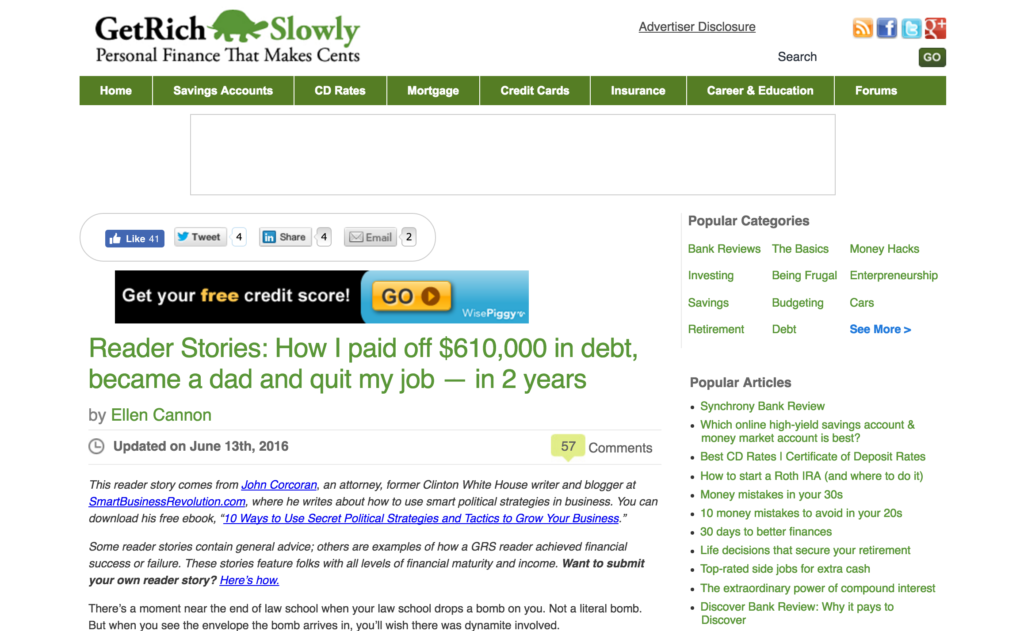 ….Sounds insane! That is one of the largest debt I’ve ever read about online, and the repayment strategy that John Corcoran explains in his article is fascinating. He has a very thorough and detailed plan of action, and used specific strategies to attack that debt. Juggling a new child in the mix couldn’t have been easy, and John explains that he and his wife worked with a financial strategist in order to pay down the debt. Even though he and his family are not completely financially solvent just yet, him and his wife are well on their way to it. He explains some of the emotional aspects of dealing with a debt that large, and gets candid about some of his biggest money fears. Check it out! 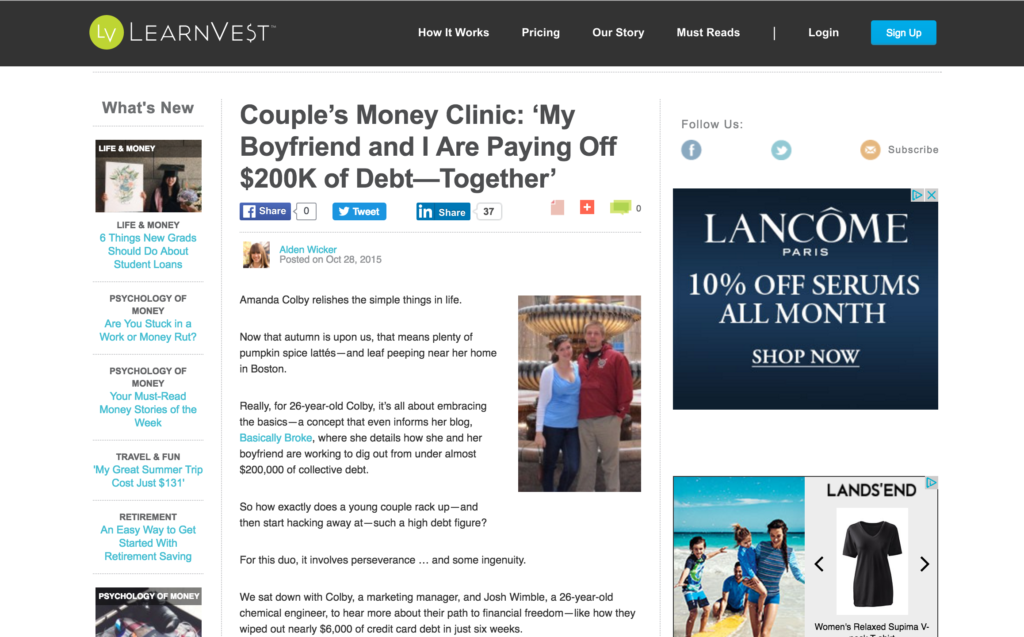 One couple gets very candid about their finances, and how they mistakenly took their student debt and unintentionally snowballed their financial situation into even more debt. They said once they got a credit card, their debt increased rapidly, explaining “Having that plastic opened the floodgates to more spending—getting dinner with friends, going out for drinks, you name it.” It’s a common financial sentiment for sure, and one that I, myself, have experienced. The couple plans their attack on their shared debt, and provide a lot of detail on how they were able to start chipping away at it. With the help of their friends, implementing creative ways to repay debt, hard work, and tenacity, they come a long way. Check out their story in full to read more details of their experience!