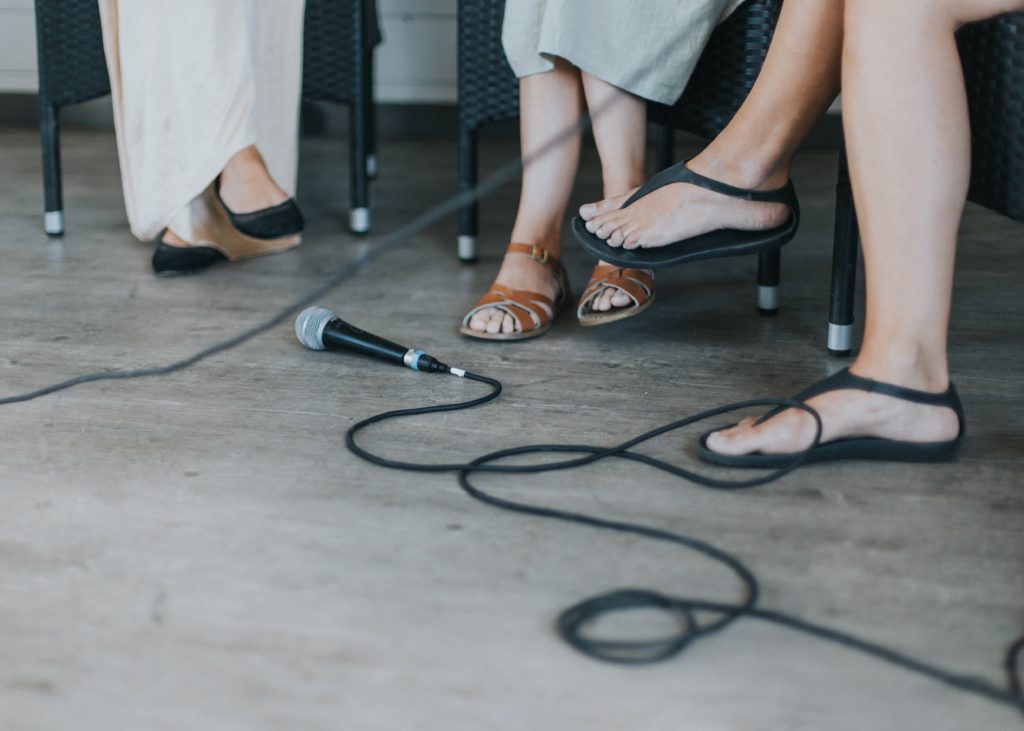 In 2017, I did something that had been on my bucket list since childhood: I started working towards becoming a stand-up comedian. I grew up during what I personally consider Saturday Night Live’s golden years: Tina Fey at the helm, Amy Poehler and Maya Rudolph having hefty roles in many sketches, and funny women everywhere. Despite my acerbic wit and penchant for sarcasm, and the fact that I was always telling funny stories, I was 34, and assumed I was far too old to get started.

I got my start in a roundabout way: I had long been a fan of Mortified, a podcast and live storytelling show where performers read journal entries, plays, and other creative works they wrote before age 19, and after hearing me read a series of hilarious entries after too much wine, a friend urged me to submit my journal. I did, and I performed in my first show in February 2017. When I got off stage after reading my truly horrifying entries, I felt exhilarated, and the producer asked if I’d ever done stand-up comedy. He encouraged me, and I signed up for a stand-up class at a local comedy club on my way home.

I took classes, went to open mics, and slowly worked up to the place I am now. You won’t be seeing my Netflix special any time soon, but I perform anywhere from three to seven nights per week all over Northern California, as well as travel to Los Angeles, and around the country a few times per year to do festivals and shows.

I have a full-time day job, and I also do a considerable amount of freelance writing, but comedy is a major part of my life. Most would say I’m doing very well for only having been performing in “real” paid and booked showcases since November 2017.

Here’s what it cost me to get where I am today in comedy:

Many comics eschew classes and say they are a waste of time and money, and that the only way to get your feet under you is to go to a ton of open mics. While I do agree that open mics are a fantastic place to cut your teeth and learn the ins and outs of being on stage, I was really grateful that I took classes. My first class was called Stand Up 101, and I learned basic things: don’t run the light (which means don’t exceed your allotted time on stage — there’s a light that a producer flashes to let you know you are almost finished, and running over your time is one of the rudest things you can do), the basic structure of a joke, and some tips and tricks. I immediately took Stand Up 201 after I finished my first class, and in that class, I wrote new jokes each week, performed them at an open mic, and my teacher gave me feedback afterwards.

Both of these classes were incredibly helpful for me. They helped me look and feel as if I knew what I was doing. I got feedback on jokes, and quickly learned what all new comics should: just because you’re the funny one in the office, or your dad thinks you’re hilarious, or you entertain your friends, it does not mean you are ready to be on stage. I got great feedback and learned a lot about how to write and perform. I was fortunate to start getting booked right away after I finished my classes, and I credit much of that to the edge classes gave me, as well as the connections I made with the more experienced comics who taught me.

For my first four months, travel costs were minimal because I was performing solely in my hometown of Sacramento, CA, meaning my gas budget was nothing major. I did apply for some festivals and in April of 2018, and I made my way to Boston, MA for my first festival: the Women In Comedy Festival. I feel incredibly lucky that I got to perform there, and that festival opened up significant connections for me, especially as a new comic. Since then, I have performed in San Francisco Sketch Fest, the Portland Queer Comedy Festival, and the Midwest Queer Comedy Festival in Louisville, KY.

A lot of my monthly budget goes directly to travel for festivals and traveling to new cities to perform. Besides the travel costs of festivals I get accepted to, there is also the cost incurred by applying to festivals that I do not get into. This can be exceptionally frustrating, as most applications are between $25 and $70 and not getting in means you’ve wasted your money. I have started getting booked more frequently in San Francisco and Oakland. At first, I was performing in the San Francisco Bay Area a few times a month; now, it is more like three or more nights per week. This has increased my gas bill significantly. When I needed a new car, I went with a hybrid specifically because I drive so much, and also because I try to go to Los Angeles several times per year, which is about a 6-hour drive.

This past summer, I spent a week in Los Angeles for a run of shows. I had to pay for an Airbnb, gas, food, and Lyfts around the city for nights when the hassle of parking would have made me late for performances. While those trips are pricey, they are worth it because they help me make connections with other comics, get credits, and help me be seen by others. Plus, it’s fun! In Los Angeles, “big name” comics are everywhere and getting to perform on the same shows is really fun. I learn a lot.

Overall, looking at my budget for travel from April 2018 until now, here is how much I spent on comedy-related travel:

Having appropriate and professional headshots is an important thing in comedy once you start getting bigger and going for larger bookings. I paid for headshots a little early, and honestly wish I hadn’t because they did not turn out well, and I did not need them yet. Thankfully, my best friend is a deeply talented photographer and she was willing to shoot some new and better ones for free once I needed more professional pictures. I am also fortunate enough to have a sister-in-law who loves to do makeup and is very talented, so that saved me money in terms of photoshoot prep.

I strongly believe that a good tape is worth investing in, because a tape of a set is the way bookers get to know you, and also has a lot to do with festival acceptances. I paid a local videographer to tape one of my sets at a well-known club and it paid back in dividends.

I do record all of my sets using my iPhone, and I have a cheap tripod I use when I want to actually watch my performance. I believe watching and listening to your sets — while cringeworthy and awkward — is one of the best ways to improve. I also use my iPhone notes for joke ideas and set lists. I don’t count it in my total, because like most of us, I use it for literally everything and would even if I wasn’t using it frequently for comedy. However, I do believe it’s worth noting.

I don’t spend a ton on fancy outfits because I am a personal uniform fanatic, so I typically wear the same thing on stage: a nice black top, good jeans, and cute boots or clogs. That said, I do make sure my clothes don’t look raggedy, wear makeup every day and especially on stage, and try to make sure I look well put-together and groomed. There is no one specific way to dress for the stage, so I just wear what works for me.

Lastly, I write jokes in a notebook, and am slightly fanatical about what kind of notebooks and pens I buy (soft-cover lined Moleskine notebooks and Pentel EnerGel pens) and that cost is minimal, but their impact matters a lot. I also keep a full stock of Moleskine Cahier notebooks to keep in my pocket and bag for writing down ideas.

I maintain a website for my freelance writing and comedy dates through Squarespace, which is really easy to use and also fairly inexpensive. I also purchased business cards through MOO, which I hand out at festivals and such. This year, I got my first merchandise to sell: stickers with my Twitter handle on them. I sold them via my Instagram and Twitter, and I also hand them out at shows because they are great free advertising and friends seem to really love putting them places for me, which is super helpful!

The grand total that I have spent on comedy since I started comes out to $14,253.46, and in reality, that is likely a low total. That is not an insignificant amount of money.

Thankfully, I do get paid for nearly every show I am on now — usually around $25, and often more. A quick scan of my Venmo tells me I easily made around $400 per month doing comedy, and that’s without counting shows for which I am paid in cash (and drink tickets, as every comic will tell you — I don’t drink, but I didn’t buy myself even one Diet Coke this year at a show, and my wife had lots of beer!). I also need to acknowledge the privilege that comes with having a wife who takes care of the labor that comes when I go out of town and am gone so frequently each week: she cares for our dogs, she rarely comes on trips so I don’t have to get a housesitter, and she also does so many of the things that it requires to keep a home going. I would not have this luxury to pursue my creative passions if it weren’t for her. I also get to write some of my costs off on my taxes. But at the end of the day, performing comedy still costs me money at this point.

My long-term goal is to be a successful writer and comic whose bills are paid solely from my creative endeavors. I have a long way to go for that to be my reality. However, I got closer in 2019, and in 2020, I hope to take a different and less-demanding day job so that I can focus more on comedy, writing, and creative work. While some folks may look at this and feel horrified that pursuing a creative life cost me this much money, I look at these figures and feel so proud of myself for building so much creativity into a busy life, crossing a dream off my bucket list, and being good enough at it that I get to perform and make money doing it. I look forward to investing even more time and money this year, and also cannot wait to see it eventually pay off.

Amy’s writing has been featured on Huffington Post, McSweeney’s, PULP magazine, and POPSUGAR.  You can see her comedy and other information on her website.