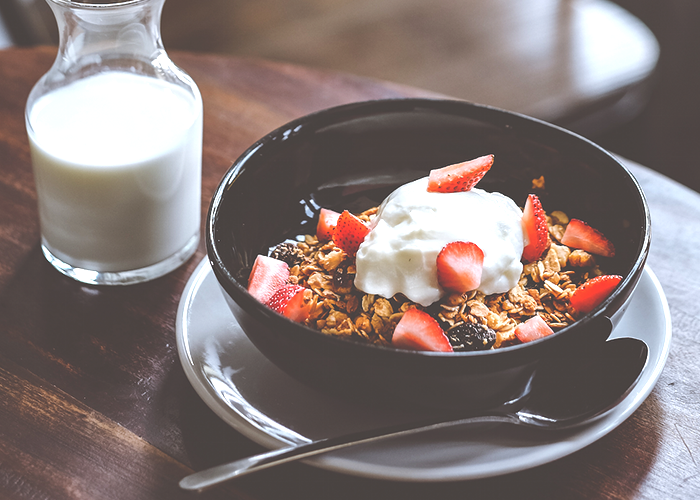 As someone who has lived without her parents for less than a year, I’m still trying to get into the groove of being in charge of all the responsibilities that were never really mine when I lived at home. Grocery shopping is probably the biggest one.

I contributed to my household once I got older and started earning more money, in that I would pick up groceries often (when I knew we ran out of things we needed, especially things I used the most), and by sharing meal-cooking duties with my mother. When I moved in with my boyfriend (without ever having the experience of living alone), I reminded him that I was a novice homemaker and would need some assistance figuring out basic things, like how much food to buy at once so it doesn’t spoil before we eat it, or how much pasta I need to cook for a meal for two people (apparently, the entire box is a shit ton). Weirdly enough, although Drew is six years older than me and has lived on his own since his teenage years, he wasn’t exactly sure where to start, either. He’s been a busy guy over the past few years, and mostly cooked himself a morning omelette and a single sad chicken breast in the evening, supplementing with meals out when he didn’t have time to cook. When I surveyed the empty fridge in our apartment the day I moved in, I decided that we needed to sit down and have a brainstorm session to plan out how we were going to grocery shop and cook meals as a two-person household. The system we came up with was less-than-perfect, but it hasn’t been a complete failure.

Essentially, we split our monthly grocery shopping between at least three different grocery stores in order to get the best deal on our food.

Before I moved in, Drew did all his shopping at BJ’s — imo, bulk-shopping for one person doesn’t make much sense, but for him, it somehow did (probably because he just bought a bulk-package of chicken and a bulk-carton of eggs and only ate that every day). Since I love cooking (and eating!!!!) for pleasure, I had to put my foot down on the bulk-chicken-consumption. He actually agreed, and seemed to be ready to expand his unsophisticated palette with me to start off our new journey as ~romantic roommates~.

Here is a breakdown of where we shop, how often we go there, what we buy there, and why:

After a bit of trial-and-error, we decided that continuing to buy three things — eggs, avocados, and chicken — at BJ’s made sense. Most of our meals that involve meat are chicken-based, because I’m not a red-meat eater (I just don’t like the taste, there are no politics behind my reasoning), and a package of 10 chicken breasts is wildly inexpensive there, and lasts us a good while if we keep it frozen and take them out individually each day to thaw for dinner that night. Avocados are sold in bulk bags of six for less than we would spend on two at any other local grocery store, so we get those there too, since they are a staple in Drew’s low-carb diet. We also buy eggs there because we both like to eat them for breakfast in the morning, and 36 eggs at BJ’s costs less than a dozen at our local Shop Rite, so I feel good about that. We spend about $20 each time we go there, so around $60 per month at BJ’s.

Recently, I’ve started doing almost all of our non-bulk, regular grocery shopping at Trader Joe’s since I started working very close to one. I go there about twice a month to pick up most of our staples. I like to buy fruits and vegetables there when I can because the prices are always great. Also, things like cereal, crackers, granola bars, oatmeal, and other various snacks cost way less than they do at other grocery chains. (I have been known to spend $5 on boxes of Ritz crackers, but Trader Joe’s sells crackers that taste even better and cost around $1.50 for a box.) TJ knockoffs of name-brand cereals are also a dollar or two cheaper there, so I stock up on things like that whenever I have the chance. However, I don’t really buy meat there very much, just because I sometimes find it to be on the pricey side. Any meat that I pick up during the month besides the chicken we use is purchased elsewhere. Each time, my bill hovers around $60 and I always come home with a giant haul of stuff. This place is my home.

Shop Rite/Big Y, depending on weekly sales: 1-2x per month.

We live barely five minutes from both of these stores, so depending on what we need that week and what is on sale, I’ll go to either. Mostly, we just go here to get meat (besides the chicken we get at BJs) and random things (like if the veggies I picked up at Trader Joe’s went bad for some reason, or I planned poorly and forgot to get an ingredient for a meal I’m making that week). Also, I religiously check both of these places to see when the ice cream we like is on sale, because ~fancy ice cream~ gets expensive, and when mama can get it for cheap, she gets it.

I don’t usually spend more than $30 here each trip.

So, total, that is really hardly anything on groceries. We spend just over $200 for two people, and that gets us three meals every weekday at home, at least. Often, we eat at home on weekends, too — but sometimes, we’ll end up going out for a meal or two. (We don’t tend to do any sort of takeout during the week anymore — we used to a lot, and it is something we’ve completely stopped doing on work nights.)

But even with such an affordable grocery bill, I wonder what we might be doing wrong. The more I look at our recent grocery bill compared to the amount of food we get for the price each week, the more I realize that the goal shouldn’t be “spending the least amount of money,” but rather “getting only what we want and need with no excess, and doing it all in an easily manageable way.”

Going to three separate grocery stores is kind of ridiculous, and even though I’m getting the best bang for my buck, I’m also often ending up with leftover food that ends up going bad, or I find myself without something I wish I had because I opted to get an item I could get more of for less money instead of buying the more expensive thing that I really wanted to cook.

I need to change the way I shop a little, and I’m not entirely sure how, but here is my plan so far:

I am such a free spirit when it comes to cooking — if I see something on Pinterest that looks good, I’ll get inspired to make my own version of it that night. If I watch something on Food Network that inspires creativity, I’ll throw my dinner plan out the window and come up with a new one on the spot. But that leads to a lot of running to Shop Rite for whatever random ingredient I need for tonight’s new exciting meal, and spending money that I just didn’t plan for. It also means that the food I did buy already is going to waste, since I’m no longer using it that night. I’m guilty of changing my mind three nights in a row and throwing away a package of meat at the end of the week because I pushed it aside each night in favor of cooking something else, and then it went bad. Not cool!

2. Try consolidating to just one grocery store (TJ’s!!!) and just go there weekly (or buy a bit more when you do go.)

I get a little freaked at the idea of spending over $100 at once, so I take frequent, tinier shopping trips at different stores to get the ~deals!~ and make sure I still get all I need. But picking just one grocery store and sticking to it for basic, weekly shopping is probably a better idea. It’ll save me the time and hassle of going to different places, and save me from the urge to run to the store in the middle of the week because I ran out of something I didn’t get enough of.

Drew is totally in love with bulk-shopping, so he might not love this — but in my opinion, we need to make those BJ’s trips less frequent. We do use a good amount of those packages of chicken, but we often end up throwing at least one or two pieces away. If we go less often, we’ll have less bulk food lying around that we don’t want to use, but feel obligated to because we bought it. I think buying a shit ton of chicken or avocados once a month is a cool plan, but doing it three times feels excessive, even if it is a good deal financially. Maybe if we were a family of four, but it is just the two of us here — we don’t have room for so much goddamn chicken in our lives.

We’re actively working on meal planning and prepping, and being a little more careful about how often we shop/how much we purchase each time. If you have any good tips and tricks on how to make grocery trips more effective, definitely let me know in the comments — I could really use the help!