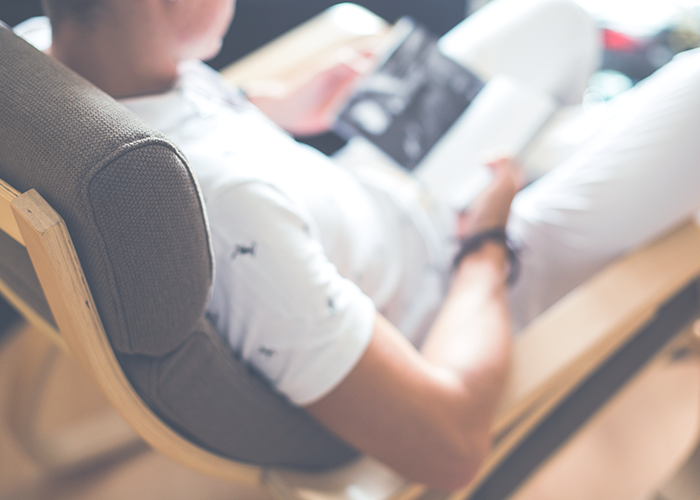 To preface this interview, I should say that I am incredibly lucky that a mix of summer-job savings, money from my parents, (cue angry mobs) and scholarships have left me nearing the end of my (undergraduate) college career with a startlingly low amount of student debt.

I know that I am, objectively, very lucky. I also know that the majority of students didn’t get so lucky.

I’m somehow intrigued by the secondhand stress I feel deep in my gut when someone drops in conversation the insanely huge (but necessary) student loan they took out to go to school. Debt is something we, as students, love to ignore, and (at least for the time being) pretend doesn’t even exist. (Which makes it pretty annoying when I start berating my poor peers and asking them excessive questions about why they decided to go into 50K of debt to earn their potentially useless degree.)

I, personally, have high Debt Anxiety. I am so plagued by the fear of living with debt that I can’t imagine any amount of passion would make me feel that any degree would be worth putting myself in that financial situation.

As fate (aka Tinder) would have it, I recently met a young man named Andrew, who, aside from being passionate, intelligent, and fresh out of medical school, had something that really piqued the curiosity of the TFD-er in me: an actual shit-ton of student debt. He graduated this past June at 27 years old, and although he hasn’t had the pleasure of receiving those fat monthly payments in the mail, (or maybe online? Is that stuff still done by mail?) yet, is looking forward to paying back nearly $300,000 in student loans.

When he casually slipped that number in conversation upon our first meeting, my heart may have actually stopped for a quick second. I know I was in the healing hands of a shiny new doctor, but that didn’t give me any less Secondhand Debt Anxiety. $300,000 is a lot of fucking money. (If we’re being honest, I have less than $10,000 of debt, and even that number leaves me short of breath.)

1. Just for some background on how this all happened, where did you go to school and accumulate this debt?

I went to Central Connecticut State University for my undergraduate degree and then did a combined MD/MBA program at a Medical School overseas named American University of Antigua.

2. Exactly how much student debt are you in?

With current interest accumulation, I am in approximately $280,000 worth of student debt (from just the MD/MBA program). My undergraduate degree was from a state school, and was very reasonably priced. Working full-time during school and doing various side jobs allowed me to fully pay for my (undergraduate) degree before I even graduated.

3. What do the interest rates look like on those loans?

The loans all have varying rates between 4.5 – 9%. Most of them are roughly 6%. Since I am only a recent graduate, my loans are currently in a grace period. I am not eligible for student loan refinancing until they go into repayment, but once they do, I will most likely refinance all my non-federal loans with interest rates greater than 6%.

4. Have you begun making any payments on any of the loans yet?

I have been making interest payments on some of my loans with higher rates. Depending from month to month these payments have been between $400 – $700. I live very frugally, so this has not been a huge issue so far. I’m trying to prevent the loans with unfavorable interest rates from ballooning out of control.

5. What do you expect your monthly payments to look like when they start? Have you attempted to calculate and see, or are you terrified waiting to find out?

6. Was there any possibility for you to pursue what you wanted (i.e. medical school) in a way that would have cost you less money? Was money a factor at all in your decision to choose that particular program, or were other deciding factors more important?

The state school I was waitlisted for would’ve been approximately 180-200k to attend, including costs of living. My medical school education cost roughly $240,000 without the MBA components so it was marginally more expensive.

I decided to take the option of going to the school I got into verses waiting a year and reapplying.

When it comes to medical school, you would be a part of the privileged few to be able to shop around for the cheapest option. You kind of just go where you get in.

7. What are your career plans (now and in the future)? Do you feel like the amount of debt you have is dictating or altering your career path in any way?

As far as current career plans go, I recently started my residency in Internal Medicine on July 1st. I will be continuing this mandatory post-graduate training for the next three years before I can practice on my own. I am still deciding if I want to continue on to a fellowship in cardiovascular disease, or seek employment as a hospitalist.

Residency is a stressful time financially, because the starting salary for my position (roughly $55,000, which after taxes leaves me with roughly $39,000) simply allows you to live modestly while making the interest payments only on your loans without having enough to pay any of the principle.

Essentially, I will be in the same amount of debt in three years as I am now despite making regular payments on my student loans. The size of my loan does bother me to some extent. However, I won’t let that be a deciding factor in whether I pursue more training or to start my career.

8. Would you ever have considered taking on such a huge amount of student debt if you were following a less stable career path?

In my opinion, the amount of student loan debt one takes on has to be proportional to the earning power you will attain after you complete your training. Otherwise, your education would be simply for your own satisfaction.

Being curious and intellectually interested in a given topic is a wondrous thing; however, it is dangerous to leverage your financial security and future on a career path or trade that will simply not return your investment of time and financial burden.

With that being said, I would absolutely take a smaller salary after completion of my degree and post-graduate training if the cost burden was less.

9. What (if anything) would you have done differently? Is there anything (financially or otherwise) you could have/would have changed if you had the chance to?

In hindsight, I would’ve taken a year off between between my undergraduate and graduate education. There were times during my studies that I compared my life to those around me, which was the wrong thing to do. Many people I knew were going on trips, buying property or luxury items, and even getting dogs and settling down. It was hard to look on and compare my life.

I knew there would be a huge financial cost to my education, but the cost of my social life of my early 20s wasn’t something I had anticipated. Had I taken that time, I would’ve graduated a bit later, but I also wouldn’t have lived with those feelings of wondering if I made the right decision by rushing into the next step without stopping to enjoy what life had to offer.

If I could do one thing differently I would tell my younger self that it is not a race; yes, make the right decisions for you, and pursue what you love, but don’t feel compelled to have such a rigid timeline.

10. What did you value most about the education itself? Aside from the return on investment side of things, was it “worth it” to spend all of that money in exchange for the education?

The obvious thing to take away from an education is the vast wealth of information you are left with after you are done with your studies, whether you realize it or not. I very much value the real world experience that I was able to get through my research projects and clinical rotations. During higher education, you pay tuition in exchange for knowledge, and hopefully a diploma at the end; but that is only half the battle. The most worthwhile thing you can do is to network and make connections with other individuals in the field. Internships, research, and extracurricular projects will open many doors. Employers would much rather hire someone that they know is a hard worker and team player whom they’ve worked with in the past than some anonymous person that they only know from a stacked résumé.

What I value most at the end of the day is being able to do what I love and to be able to support myself financially from it. There were moments of fear and self-doubt along the way, but I can wholeheartedly say that it was worth it.