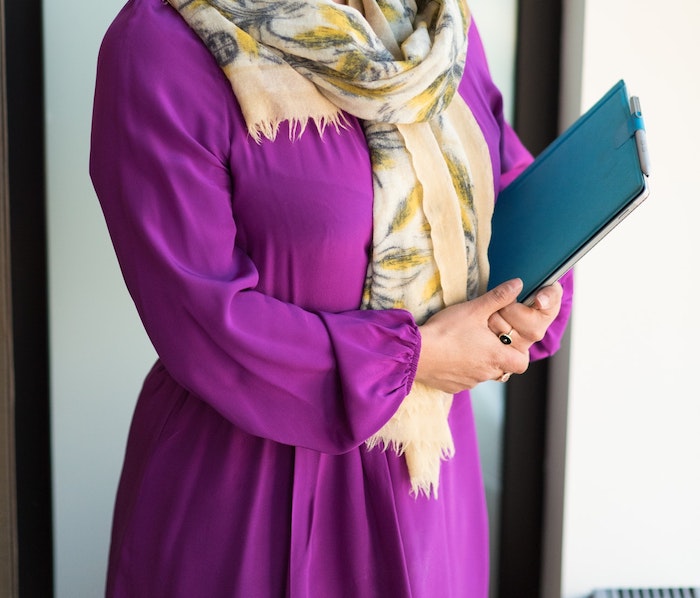 A few months ago, after a frustrating situation at work, I messaged a trusted colleague and asked, “Do you ever feel like even having gone to college and landed a professional job, there’s still a sense of upper-middle-class office culture that is disorienting?”

We ended up having a deeper discussion about our mutual shared experiences growing up low-income, and I wondered why I had been so hesitant to explicitly broach the topic sooner when it felt so freeing to discuss it openly. It took me a while to analyze what I was feeling as more than just a one-off experience. Money, income, and class are still “taboo” topics, especially in the workplace.

I’m a low-income, first-generation college graduate, and for the majority of my life, my parents worked in retail and took care of our home. I was fortunate to have safe shelter, food security, school supplies, clothing, medical care, and modest activities with friends, but a large part of that is due to my parents working and sacrificing a lot, including their own needs, to provide a stable childhood for me on a paycheck-to-paycheck existence. As a child, I had a hazy sense that most of my friends were from middle to upper-middle class families — they took nice vacations each year, received the newest phones as presents, and participated in expensive hobbies — but it wasn’t until college that I had a better grasp of this variance and could contextualize it within a socioeconomic frame. I graduated with a manageable student loan, thanks to thousands of dollars in scholarships and grants, the ability to live at home while attending classes, and working up to three part-time jobs at once.

In speaking with friends who were (or are) also low-income, I’ve reflected on some of the areas where growing up and being low-income affects the ways I’ve navigated what we’ve broadly named “professional office culture.” I’ve found that talking them through helped me understand more about myself and contextualize my individual stories within systemic patterns. Basically, I realized, I’m not alone here.

Water cooler talk can be awkward.

Topics of conversation at lunch or in the elevator often center around recreational activities that require a decent amount of discretionary money — vacations, eating out at restaurants, streaming the newest show, etc. As an adult, I’ve participated in all of these things to varying degrees, yet I continue to work through complicated feelings of guilt associated with spending some “fun” money on myself.

I’ve come to realize that the things I consider to be a big deal or a rare occurrence aren’t seen the same way by others (I was shocked to realize my peers eat out and order in as frequently as they do). I love my colleagues, and I genuinely enjoy hearing about what makes them excited, so I’d sometimes wonder why certain conversations left me feeling exhausted or uncomfortable. I realized that in many of those cases, it came down to norms and casual assumptions related to entertainment expenses or experiences that just aren’t in sync with mine from childhood or now.

Business travel was a big deal.

The first two times I took trips by plane were for college recruitment events. The schools paid, and I was 17 and very stressed about not knowing what to do. The third time was for a large business trip at age 22, and was, yet again, very stressful because I didn’t know what to do. Navigating business travel — from booking flights to requesting reimbursements to securing credit card authorizations for hotels — has now become my norm, but it’s hard to think back to just a couple of years ago and remember that disorienting feeling. Some of this is understandably due to being a young professional, but as a low-income earner and someone without an extensive index of family travel experience to fall back on, I struggled to acclimate and not feel dumb by asking questions or seeking outside help. For example, I didn’t know at the time I could request a travel advance from my employer so that I didn’t need to pay hundreds of dollars out of pocket and wait for reimbursement.

This is a really complex topic, and as a skinny, white, cisgender woman, my experiences of this are not oppressive in the ways they can be for women of color, especially for Black women, trans women, and fat women. I can get away with presenting more casually and still be taken seriously, pointing to a lot of privileges I carry just within my physical presentation and problematic definitions of what looks “professional.” Two areas I can comment on, however, are additional markers of professionalism that are also often markers of wealth: “good” skin, and “good” teeth.

I struggled with painful acne as an adult for six years before I found an expensive and time-consuming treatment plan that worked. My family couldn’t afford to spend thousands of dollars on orthodontic treatment, so I never had my wisdom teeth removed or had braces. Last year, I finally had money saved for wisdom teeth removal, but the ensuing medical complications due to being relatively old for treatment were traumatic and cost me additional time off of work months after the surgery. I’m also beginning the process for braces after a dentist told me my teeth would physically wear each other down by the time I was 50 (!) if I didn’t get them.

I’m incredibly privileged that I’m able to pursue these expensive and time-consuming treatments as an adult with some savings and health insurance, and that I have the ability to pay for medicines and take sick time off of work. But in addition to genuine health concerns, I also wanted to invest in these things so that I would be treated as a competent professional in the future, and “catch up” to many of my peers who had these procedures done in adolescence. I know, consciously, that competence isn’t tied to these physical markers — I’ve proven that already, and that’s a classist assumption! But I also know others don’t hold the same belief.

But in some ways, it’s easier to connect with others.

The first three aspects I’ve pointed out above have skewed negative, but I want to present a more complete narrative that also includes positives — it’s important to acknowledge these points without romanticizing them. The work ethic, conscientiousness, and humility I grew up around helped me to develop those same characteristics, and these inform my high level of customer service and engagement. And, because of my own experiences, I tend to operate from an unassuming place when interacting with others. Whether it’s explaining a scheduling policy in my receptionist role or explaining participation information to scholarship recipients, I hold myself to a really high standard to help others, because I know I have benefitted from the same. Of course, these aren’t traits exclusive to growing up low-income, but I’ve seen how my empathy and awareness at work is informed by experiencing the world from that lens.

Being more open about growing up low-income — and being a first-gen graduate — has allowed me to connect with certain colleagues on a deeper level and form community with them. It’s a given that having similar life experiences often creates connections, but seeing that play out when it comes to less privileged identities has been crucial in helping me feel like I’m not alone in any given professional environment. That trust and connection translate to better working relationships too, which I feel has helped me be a more creative and justice-driven employee in service of my organization’s broader mission.

Briana Jarnagin is a non-profit professional in Chicago with a deep love for maps and iced coffee, and a burgeoning love for personal finance podcasts. She can be found on Twitter at @bri_jarnagin