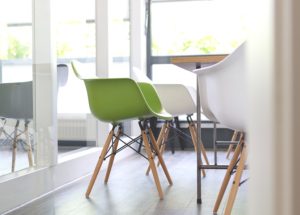 When I was in college, one of my professors informed us that people are more afraid of public speaking than they are of death — which means that most of us would rather be in the casket at a funeral than giving the eulogy.

I am one of those people. Which is weird, because as a Theater major and singer, I’ve spent a lot of time onstage. This gives me a leg up on the people who have never done anything in front of a crowd — but there’s a world of difference between speaking or singing in a play and giving a presentation to my boss. After college, I muddled along as best I could, but I knew I was lacking. After flubbing a training session for a client at work, I cried through a phone call where my boss told me the client didn’t trust me to lead another one, so he would be taking over. That was a humiliating wake-up call that I needed to do something about my fear.

So what did I do? Nothing, of course. I spent the next few years avoiding the topic of presentations altogether. #nailedit

After job changes and general life shenanigans, I finally landed in a role that not only made it necessary to make presentations, but also made me want to. I wound up leading several of what my boss calls “signature projects,” all of which needed to be shopped around to leadership and promoted to/understood by the teams involved. I had to learn how to state my case, make recommendations, and promote my success — and I couldn’t do that while hiding underneath my desk.

Throughout my life, I’ve learned over and over that the best way for me to overcome a fear is to practice doing the thing that intimidates me. For example, the idea of writing a resume and cover letter used to freak me out. But after being unemployed/underemployed for a year and writing 178 of them while applying for jobs, the whole concept lost its bite. By the end of that year, I could write the stuff in my sleep. When it came to learning how to be better at public speaking, I had a few presentation opportunities at work, but knew I’d need frequent practice and feedback to actually improve. While wracking my brain for ideas, I dredged up a memory of a program that gives people a way to practice public speaking in a healthy environment.

My dim recollection turned out to be of Toastmasters, an international organization whose mission is “to empower individuals to become more effective communicators and leaders.” Members prepare and present speeches, learn to accept and give feedback, and improve their leadership skills. I attended my first meeting in June 2017, not quite knowing what to expect. Fortunately, I happened to be a guest at a club filled with incredibly friendly, caring people. Each club has its own “personality,” and I lucked into what my family would call “a good ‘un.”

The club president greeted everyone and called up the meeting leader. Known as the Toastmaster, it was this person’s job to introduce other meeting roles and keep things on schedule. Other members were responsible for timing speeches, counting filler words (like “um” and “uh”), and evaluating speakers. A couple people gave prepared speeches, and then we had “Table Topics.” These are off-the-cuff speeches prompted by questions around a specific subject, everything from childhood experiences to your stance on climate change. After that, the people who gave prepared speeches received verbal and written evaluations to help them improve for next time. The club president gave closing remarks, and that was it. The whole meeting took an hour. In that hour, I saw the light, and I decided to join Toastmasters.

My biggest worry about joining Toastmasters was the speech topics themselves. What was I supposed to talk about? Was I going to be able to choose anything I liked, or would there be a list of pre-approved subjects? I was relieved to discover that while you should choose something engaging, the topic doesn’t matter as much as the goal you’re trying to attain when giving that speech. For example, “Organize Your Speech” can be about any topic, but your goal is to give a well-organized speech that has a clear beginning, middle, and end.

No matter which official path you take in Toastmasters, your first speech is always “The Ice Breaker.” The idea is to ease yourself into the process by talking about your favorite subject: yourself. You already know everything about the topic, which makes it easier to write and give the speech. The evaluation you receive for this speech becomes your baseline, and helps you figure out what you do well and how you can improve. It can be about more than your actual speaking; maybe your voice was clear and your presence excellent, but your speech was poorly organized and the evaluator had trouble understanding what point you were trying to make. Your goal — besides just getting through it — is to learn your strengths and weaknesses.

The first official meeting of Toastmasters Club No. 1 took place on October 22, 1924. Organization leaders have made changes over time, but the biggest overhaul took place last year with the introduction of Pathways. As valuable as Toastmasters has been to many people, it needed modernization. Communication is vastly different today, and there are more ways to become a leader than ever before. Pathways expanded the types of speeches and projects members can take on, and each path is wider and more varied. For example, the path I chose (“Innovative Planning”) includes speeches as well as projects like “Present a Proposal” and “Record a Podcast.” Pathways launched with 10 path options, everything from “Effective Coaching” to “Visionary Communication.” The path you take is up to you.

Joining Toastmasters is one of the best decisions I’ve ever made, and it has changed my life. If you want to improve your public speaking and leadership skills, I recommend checking it out. You won’t regret it.