How Each 2020 Democratic Candidate Plans To Make Housing More Affordable 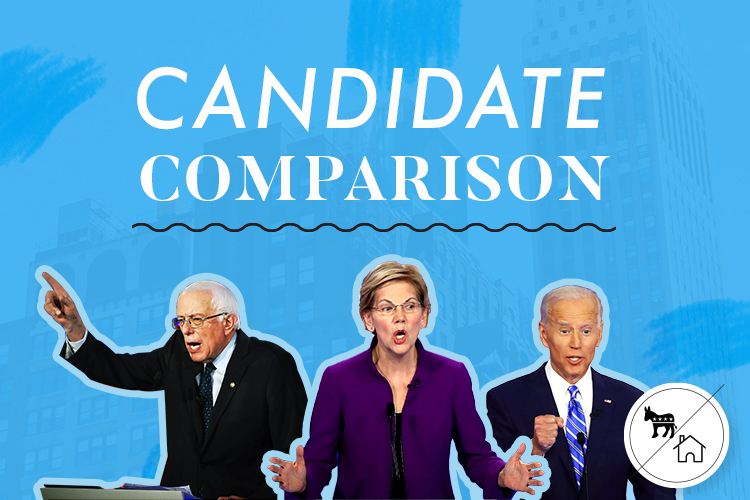 This is a series on the 2020 Democratic presidential primary election. We’ll be breaking down how each candidate in the race stands on a handful of important social issues. Today’s issue? Housing. For a quick summary, check out our infographic at the bottom of the post.

In the past few decades, the cost of housing across the United States has become increasingly unaffordable. One part of the problem is that the average income of renters has not risen to meet the growing cost of rent. Meanwhile, the supply of apartments for rent has not met the increasing demand. According to a 2018 National Low Income Housing Coalition report, there is a shortage of 7.2 million homes for Americans in the lowest-income renter households.

Moreover, as fewer people are able to afford housing, homelessness is on the rise, and the Trump administration wants to cut funding for housing assistance, which will affect the lowest-income households. Racial disparities persist as people of color are disproportionately impacted by the housing crisis. Redlining — pushing people out of areas where they have access to services — is a growing concern, among other zoning issues.

To address these problems, the 2020 Democratic presidential candidates have proposed a variety of measures that would help Americans, particularly low-income renters, afford housing. Several of them have called for increased federal funding to build more houses, while others have proposed rent subsidies or rent control — or a combination of these solutions, according to Politico. Specifically, here’s how the leading 2020 candidates say they’d make housing more affordable.

Bernie Sanders: Housing For All

Easily the most ambitious plan, Senator Bernie Sanders’ proposal to make housing more affordable includes capping rent costs, providing funding for construction of new housing, and levying taxes to fight real estate speculation. Sanders’ proposal, which he calls Housing for All, declares that having access to a safe, affordable home is a fundamental human right. His campaign notes that seniors and persons with disabilities comprise almost half of the renters who are the hardest hit by the housing shortage and that the housing crisis affects both people in big cities as well as many in rural areas.

Housing for All proposes to build nearly 10 million affordable homes, protect tenants by capping annual rent increases to no more than three percent, or 1.5 times the Consumer Price Index, whichever is higher.  The plan would also impose a 25% House Flipping tax and require landlords to provide a “just cause” to evict their tenants and would prevent exclusionary zoning by replacing restrictive zoning ordinances with ones that make housing more affordable. Sanders has also said he wants to prioritize “25,000 National Affordable Housing Trust Fund units in the first year to house the homeless,” make housing much more sustainable through the Green New Deal. To help pay for this proposal and more, Sanders has introduced a plan to impose a tax on extreme wealth, meaning the top 0.1% of households in the United States.

You can read more about Sanders’ plans here.

Joe Biden: A $15,000 down payment for first-time homebuyers

At present, former Vice President Joe Biden doesn’t have a “specific affordable housing plan,” according to this site, but he has promised to invest $10 billion through the United States Department of Housing and Urban Development, or HUD, to revitalize cities. He’s also said he would support federal investments in low-income neighborhoods to provide affordable housing and is in favor of giving affordable housing opportunities to those with criminal records.

In his Plan for Strengthening America’s Commitment to Justice, Biden has said he will urge HUD “to only contract with entities that are open to housing individuals looking for a second chance.” His campaign has set a goal of all formerly-incarcerated individuals having access to housing upon reentry, which is both a criminal justice and a housing issue.

Biden has also emphasized that he believes no American should have to spend more than 30 percent of their income on housing and that as president he would guarantee access to Section 8 housing for everyone. Additionally, Biden has said he plans to give first-time homebuyers a $15,000 down payment from the federal government.

You can read more about Biden’s plans here.

Senator Elizabeth Warren has an aggressive plan to make housing more affordable, too. The main goals of her plan include reducing the cost of rent by 10 percent, closing the racial wealth gap, and creating 1.5 million new jobs in the process. The crux of her plan is to provide federal funding to build more houses to alleviate the housing affordability crisis.

According to her proposal, Warren would bring the cost of rent down by tackling the issues at the root of the problem, meaning “a severe lack of affordable housing supply, and state and local land-use rules that needlessly drive up housing costs.” The bill she introduced, the American Housing and Economic Mobility Act, calls for up to 3.2 million housing units to be built. According to one analysis, Warren’s proposal would lower rental costs by 10 percent in the next 10 years. She would fund all of this by increasing the estate tax. As her website explains, “Currently, an heir doesn’t pay a dollar of estate taxes until they inherit a fortune of $22 million or more. I would lower that threshold to $7 million — which is where it was when President George W. Bush left office — and raise the tax rates above that threshold so ultra-millionaires and billionaires pay a larger share.”

You can read more about Warren’s plan here.

He has guaranteed housing vouchers to Americans at or below 30% the median income in their area, along with emergency financial assistance. He also wants to raise the Earned Income Tax Credit (EITC) and increase the Child Tax Credit for low-income Americans, families, and hard-pressed areas.

He’s said that he will use regulation and incentives to “curb discrimination by landlords, so that tenants are protected regardless of income source, sexual orientation, or immigration status.”

You can read more about Bloomberg’s plan here.

Like his competitors, Mayor Buttigieg wants to lower the cost of housing by providing funding for the construction of new homes. Specifically, he would invest $430 billion to “dramatically increase the supply of affordable housing by building or restoring over two million units for the lowest-income Americans.” According to Buttigieg’s plan, he would reform zoning laws to make them less exclusionary and restrictive. He plans to “invest in homeownership, particularly for Black Americans, enabling one million more low-income families to become homeowners,” according to his site.

The Buttigieg campaign has proposed the Community Homestead Act to address the historic problem of redlining by enabling wealth accumulation through homeownership for low-income families who were disadvantaged by redlining. Buttigieg also supports housing choice vouchers and would invest $170 billion to ensure access to them.

You can read more about Buttigieg’s plan here.

Senator Amy Klobuchar has said she aims to protect tenants from housing discrimination by establishing a new federal grant program. In her first 100 days as president, she wants to undo the Trump administration’s attempts to undermine fair housing rules. Klobuchar’s plan would focus on providing affordable housing for rural communities by increasing the supply of affordable housing, expanding housing programs that provide assistance to Native Americans, and strengthening rural rental assistance programs.

One goal of Klobuchar’s plan is to attract private investment in housing in rural areas. Under her plan, community financial development institutions would be incentivized “to provide access to credit in rural communities.”

To pay for this plan, Klobuchar proposes increasing the corporate tax rate to 25 percent from 21 percent and would “raise the capital gains rate to the income tax rate for households making over $400,000.”

You can read more about Klobuchar’s plan here.

Where other candidates stand

Aside from the top six candidates, according to the New York Times, other contenders have clear stances on affordable housing, too. Billionaire Tom Steyer has a more detailed plan to achieve affordable housing. His plan includes investing $47 billion per year in affordable construction and renovation, updating the LIHTC (Low Income Housing Tax Credit), increasing access to the Housing Choice Voucher Program and investing $8 billion in assistance grants and case management for the homeless.

At present, Congresswoman Tulsi Gabbard has not released an affordable housing plan, but according to her campaign, she has been an advocate for federal funding of affordable housing in the House of Representatives. Gabbard would like to bolster protections for the homeless by reinvesting US defense spending.

Having a safe, affordable place to live is a basic human necessity and an issue that American voters care about. The cost of renting or buying a home is often the biggest item in anyone’s budget, and it’s becoming an increasing concern in our economy. As the 2020 presidential election looms, it’s important for voters to know how these candidates would make housing more affordable for those who struggle.